Lecturer of Faculty of Animal and Agricultural Sciences Undip, Turrini Yudiarti, Revealed the “Benefit of Fungi as Substitute of Antibiotics in Animal Feed” at the Professor Inauguration Ceremony 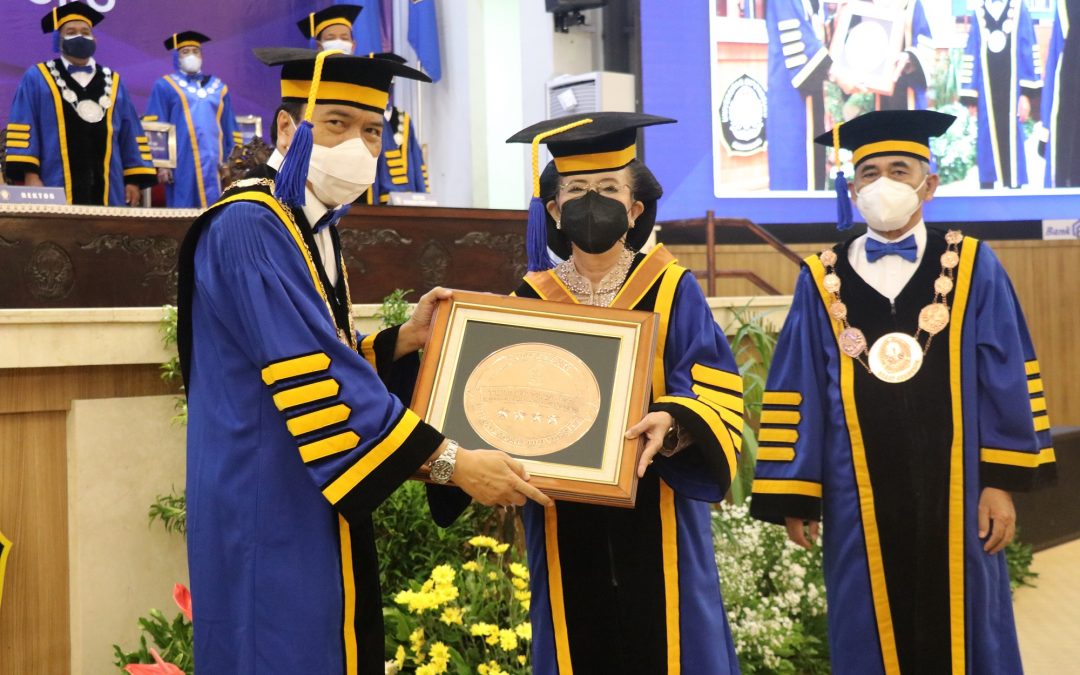 SEMARANG – For her diligence in researching the benefit of fungi as a substitute for antibiotics in animal feed, Dr. Dra. Turrini Yudiarto, M.Sc. managed to reach the highest academic level as a professor. This lecturer of Faculty of Animal and Agricultural Sciences of Diponegoro University (Undip) delivered a scientific speech entitled “Exploration of Fungi Derived from Soil, Plants, and Livestock to Increase Poultry Livestock Productivity in Indonesia” at the Undip Academic Senate Open Session on Thursday (28/10/2021), which marked the beginning of her career as a professor.

The Biology and Microbiology lecturer at Faculty of Animal and Agricultural Sciences Undip admitted that she was concerned about the number of poultry farmers who used Antibiotic Growth Promoters (AGPs) to increase their livestock productivity. The consequence of using AGPs is a greater negative impact caused by the residue of these materials. “The use of AGPs is not only dangerous for livestock, but also for those who consume them. Livestock are likely to be resistant to chemicals that are used continuously and chemical residues present in livestock products will also be consumed by humans,” said the woman who was born in Semarang, December 2nd 1959.

Therefore, before the issuance of the government regulation concerning prohibition on the use of chemicals as feed additives as stated in the Regulation of Minister of Agriculture No. 14/2017, Turrini tried to find a solution so that poultry farmers could increase their productivity without having to add AGPs to their animal feed. She was looking for an alternative to dangerous antibiotics with ingredients that are safe to use, namely microorganisms in mushrooms, fungi, or molds.

The use of antibiotic chemicals for livestock carries many dangerous risks, so Turrini was determined to find natural substitutes so that poultry farmers can continue to run their businesses efficiently and safely. Other countries have already banned the use of APGs for livestock, while Indonesia only enforced it as of January 1st 2018.

From her study, fungi which are very prominent in the tropic areas but have received little attention, in fact have great potential to convert basic animal feed into quality feed that are able to accelerate growth. Natural fungi that seem dirty are not only playing a role in degrading carcasses, waste and remnants of other organic materials, but it is also turning leftover organic matters into food that can be used by other microorganisms and make nature clean.

The abilities of fungi to ferment substrates, secrete various enzymes, hormones, vitamins, and organic acids, as well as degrade toxins, are known to be able to produce antibiotics. There are advantages of fungi that are not possessed by other microorganisms, namely being able to survive in an environment with extreme environmental conditions in the form of dormant spores. In addition, fungi can be found everywhere either in the air, in the sea, soil, plants, livestock and also in the human body.

Referring to the potential, benefits, existence and advantages of fungi, Turrini, who is now a mother of two children and grandmother of one grandson, did a further exploration about fungi. Various fungi derived from soil, plants and also in the body of livestock are also explored for their potential and capabilities. The derived fungi then are made into dry culture products such as additional feed and functional feed for poultry.

The winner of a Master degree from The Royal Veterinary and Agricultural University (RVAU) Copenhagen, Denmark in the field of Plant-Biology in 1990, explored the ability of fungi to ferment various organic wastes such as scorched rice, tofu waste, palm pulp, and bran. The results of the exploration were very promising. “It turns out that fungi are able to increase the nutritional value of residual organic materials, including increasing their protein content,” said the wife of Drs. Bambang Prihanto T.Y.

When she had conducted adequate studies about fungi, the woman who owned several patents then introduced fungi fermentation process to the poultry farmers who became partners. They already felt the benefits because the protein content in residual organic matter can be increased with fungi fermentation. “For now this research result is applied for animal feed for all types of poultry, we have not tried it on other types of livestock,” said the graduate of the Undip Animal Science Doctoral Program.

For her achievements as a professor at Diponegoro University, Turrini Yudiarti said that she was very grateful. “This is a gift from God that I never imagined before. The title of professor will encourage me to do better,” she concluded. (PR team)