Undip Rector’s Message to the 37 Contingents at 34th PIMNAS 2021: The Highest Crown of a Winner is Achievement and Sportsmanship 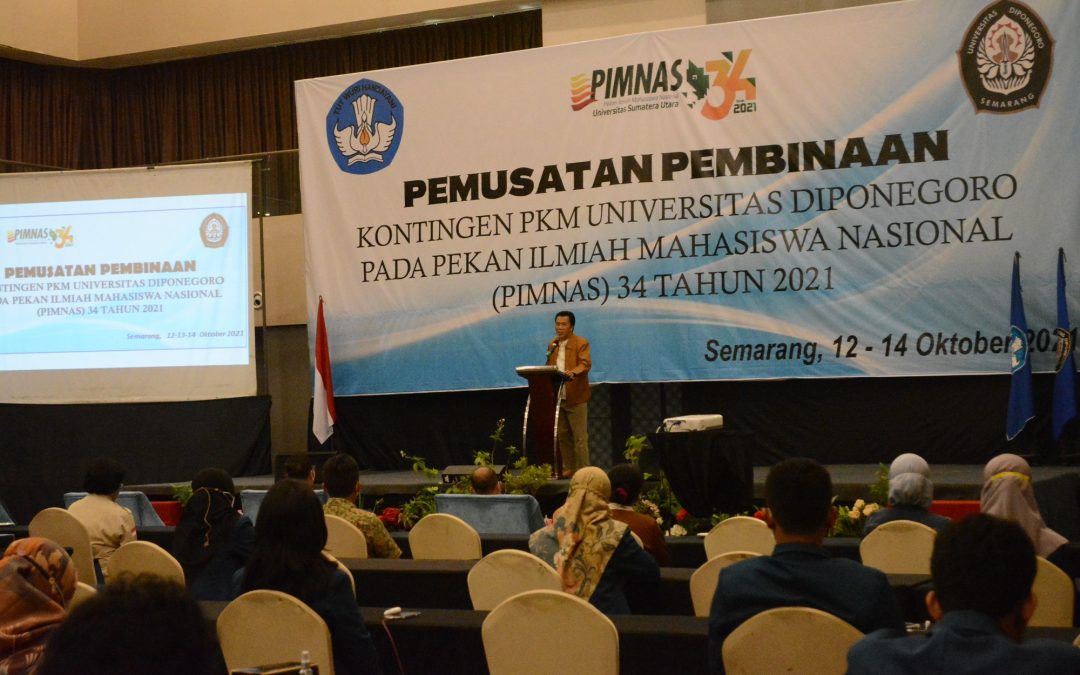 Semarang, Central Java (27/10). A total of 37 teams of Student Creativity Program at Diponegoro University (Undip) Semarang have prepared to compete in the final of the 34th National Student Scientific Week (PIMNAS) 2021.

Undip specifically held various activities at training centers and mentoring programs for the Undip contingents of Student Creativity Program to prepare articles, posters, and videos. These efforts were carried out to be able to make the teams win medals in various categories and to be nominated as the general champion.

In addition, according to Prof. Yos, the packaging of the material and the explanation of the research material are also important to note because it will affect the judgment of the juries.

“It is important how you package and show the material so that people will understand easily. Do not give difficult explanations, choice of words must be right. At certain times, you can use foreign language, but don’t overdo it. That’s why presentation is important, easy to understand in a simple way,” he explained.

Prof. Yos hoped that apart from being the general champion at the 34th PIMNAS 2021, Undip contingents of Student Creativity Program also need to cultivate a spirit of sportsmanship in competing.

“It’s better to not wear a crown than to wear a fake one. So I also hope that you will win it as a knight. Win with honesty. The highest crown of a winner is achievement with sportsmanship,” added Prof. Yos.

Prof. Yos also encouraged Undip students who were members of the contingents. “If you make in your mind that you will become a champion, Insyaallah you will be a champion. Raise the spirit within you, encourage yourself to be the best. Don’t worry, don’t hesitate, and don’t feel inferior. Show that we come from the greatest university,” said Prof. Yos.

In his report, Undip Vice Rector I for Academic and Student Affairs, Prof. Budi Setiyono, S.Sos, M.Pol.Admin, PhD., explained that this activity will be held for 3 days and attended by 37 teams of Student Creativity Program who qualified for the 34th PIMNAS. Of the 37 teams, there were 152 students from 10 faculties.

“We hope that they can compete optimally so that they achieve the best rank and each team gets a gold medal,” said Prof. Budi.

There were 735 titles that passed to compete at the national level of 34th PIMNAS event. The Ministry of Education, Culture, Research and Technology through the National Achievement Center (Puspresnas) will hold the 34th National Student Scientific Week (PIMNAS) in 2021 in collaboration with the University of North Sumatra (USU) as the host of the 34th PIMNAS. This PIMNAS will be held online on October 25-29 2021 by using the Zoom meeting platform and live streaming on the USU Official Social Network Youtube channel.