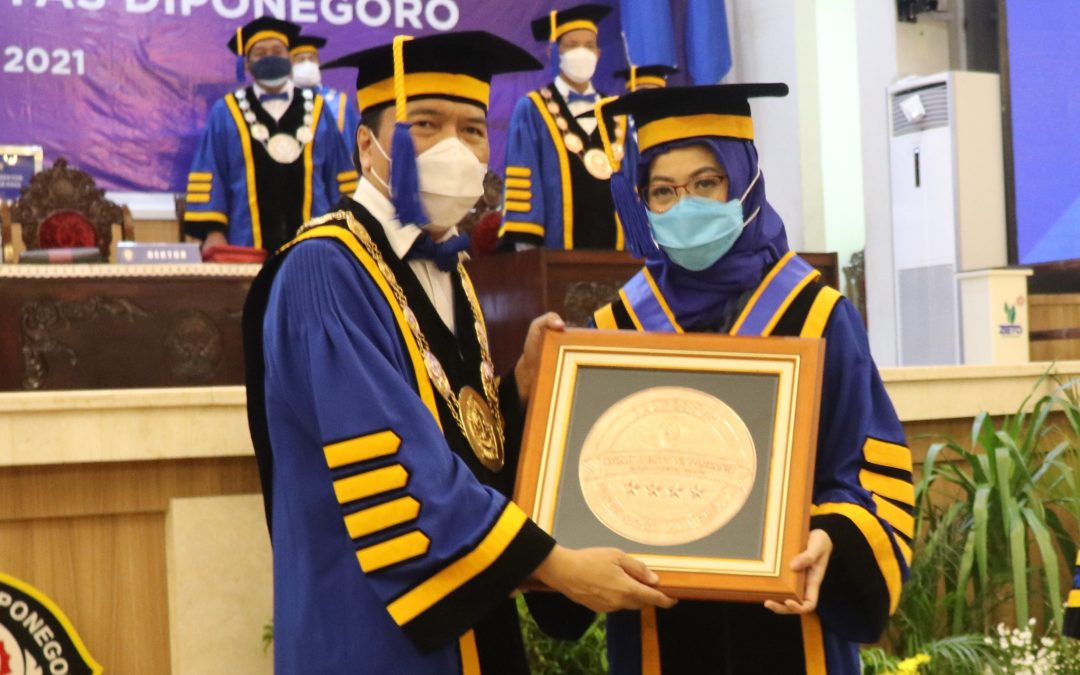 SEMARANG – Currently, porang plants are mostly processed in the form of thin slices or flour, with a glucomannan content of around 64% while international standards set a minimum glucomannan content of 90%. Therefore, the cultivation of porang plants in Indonesia is only valued at IDR 100,000 to IDR 150,000 per kilogram, whereas if processing and refining are done the value per kilogram can reach US$ 25 or IDR 350,000 per kilogram.

In her inaugural speech as a professor, a lecturer at the Department of Chemical Engineering, Faculty of Engineering, Diponegoro University (Undip), Prof. Dyah Hesti Wardhani, S.T., M.T., Ph.D; revealed her efforts to develop technology that can produce premium porang glucomannan with content of 93% levels using the enzyme amylase. This way, she succeeded in increasing glucomannan levels by up to 93% past the international standards set. For the initial purification, Dyah Hesti used an ultrasonic assisted process using 80% isopropyl alcohol (IPA) in 3 stages to obtain 83% glucomannan content with a viscosity of 1% which is 15,960 cP.

“Porang plants are a superior commodity that is being developed by the government. This is because the polysaccharide content in the form of glucomannan which has unique properties, including the ability to absorb water more than 100 times its initial weight, can form stable films and gels. With these characteristics, glucomannan used as thickeners, coatings, emulsifiers and stabilizers in the food industry, even in non-food, cosmetics and pharmaceuticals fields,” she said at the Open Session of Undip Academic Senate which was held online and offline on Thursday (28/10/2021).

In the speech entitled “Development of Purification Technology and Utilization of Porang Glucomannan as Coating Active Substances in Food Products”, the lecturers of four courses at the Department of Chemical Engineering stated that the purification process she was doing is a development from a laboratory scale to a pilot scale. She emphasized that purification is not enough only to be carried out by physical processes, but must use other processes.

According to Dyah, who earned a Ph.D. from the University of Manchester, starch from porang plants contains protein and crude fiber which become impurities so that the glucomannan content cannot meet the international standards set. Therefore, it is necessary to carry out purification in stages using alcohol as a solvent. To be economical, solvents that have been used can be reused.

Based on her estimation, if porang glucomannan (Amorphophallus onchophyllus) is purified, the export value obtained will increase several times in the same volume position. “The export value of porang plants continues to increase, in 2020 the value reached IDR 923.6 billion. Unfortunately, most of the products exported are processed in the form of thin slices or flour, with a glucomannan content of around 64%, far below international standards. Starch, protein and crude fiber are the main impurities in porang flour,” said the mother of two from her marriage to Ronie Fredianto, S.Sos, M.M.

The woman who graduated from Undip Chemical Engineering in 1998 stated that glucomannan is a neutral heteropolysaccharide compound consisting of D-mannose and D-glucose linked by -1,4 bonds with an average molecular weight of 2,000,000, depending on the variety, purification method and storage time. Glucomannan has special properties such as being able to form a transparent and elastic film and being able to absorb water up to 105 g water/g glucomannan. These special properties make glucomannan not only used in the cosmetic and food industries but also in the pharmaceutical industry.

High levels of glucomannan can also be used as a coating material to protect the active substance. The coating of active substances is widely used in the food industry, such as in coating colors, flavors as well as for fortification and supplements. It is reminded that in order to suit the utilization and coating method, the characteristics of glucomannan need to be modified.

Coating carried out using the phase separation method requires a coating material that is capable of producing a strong gel. Through deacetylation, which is a process to break the covalent bond between the acetyl group and nitrogen in the acetamide group of chitin, it increases the ability of glucomannan to form a gel. At a degree of deacetylation of 88%, the capacity of vitamin C coated by deacetylated glucomannan reached 85%. Coating iron with the same material achieves an efficiency of up to 68%.

For coating using the spray drying method requires a low viscosity coating. Therefore, glucomannan is degraded to decrease its viscosity. The iron coating using glucomannan showed a coating efficiency of up to 85%. This coating is able to protect iron up to 70% after 120 days.

The success in coating vitamin C and iron shows the potential of glucomannan as a coating for other active substances. Therefore, various methods of glucomannan modification also need to be researched further in order to meet applications in other materials, such as coatings of hydrophobic compounds, emulsifiers and other biomaterials. (PR team)