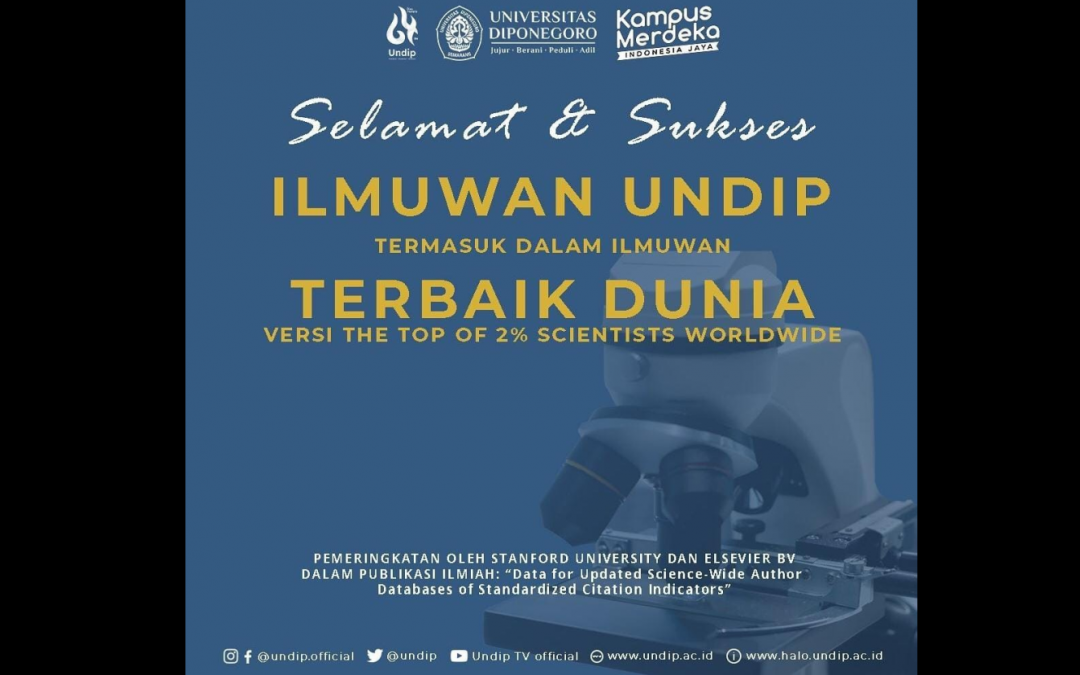 SEMARANG – Three academics from Diponegoro University (Undip) are included in the list of the top 2% of influential scientists in the world based on a ranking made by Stanford University, United States of America in collaboration with Elsevier BV. The three academics are Prof. Dr. rer. Nat. Heru Susanto, S.T., M.M., M.T. (professor of the Department of Chemical Engineering, Faculty of Engineering Undip); Sugiharto S.Pt., M.Sc., Ph.D (lecturer of Department of Animal Science, Faculty of Animal and Agricultural Sciences Undip); and Dr. Eng. Achmad Widodo, S.T., M.T. (Department of Mechanical Engineering, Faculty of Engineering Undip).

In the publication based on the ranking conducted by Prof. John Ioannidis with Jeroen Baas and Kevin Boyack, the names of three Undip academics are listed among 58 Indonesian scientists who are included in the Top 2% of the World Ranking Scientists published in October 2021. Selection in the ranking is carried out in a long and detailed process.

The Top 2% World Ranking Scientists published by Stanford University used assessment matrix on a database of more than 100 thousand top scientists. This database contains standardized information on citations, h-indexes, hm-index adjusted for co-authoring, as well as aggregated indicators. The scientists are classified into 22 scientific fields and 176 scientific sub-fields.

One of the Undip scientists, Prof. Dr. rer. Nat. Heru Susanto, S.T., M.M., M.T. is a diligent person who is intensely developing research on membranes and has produced many recognized scientific works. Heru Susanto, who currently serves as Undip Vice Rector II, said that he was surprised when he saw his name included in the list of the most influential scientists in the world in 2021.

“I feel that I have not been able to contribute significantly to the development of science and technology, especially in membrane technology as my research field. Many of Undip lecturers are better than me so they deserve to be included in the list. Hopefully in the future I can be better and consistent in doing research and contributing to the nation,” he said, on Tuesday (2/11/2021).

With a similar expression, Sugiharto Ph.D who was included in the list also said that there were many Undip lecturers whose knowledge was more qualified and superior than himself. According to Sugiharto, one of the means to be known internationally is diligent research which produces international journals and international patents.

“My research topic is about feed additives or functional feeds which can reduce livestock dependence on antibiotics. By being given functional feed, it is hoped that chickens without antibiotics in their feed can survive and produce well,” said the lecturer who focuses on scientific development of immunology and microbiology in animals.

Meanwhile, a lecturer at the Department of Mechanical Engineering who is also listed in the Top 2% of the World, Dr. Eng. Achmad Widodo, S.T., M.T, also revealed that he did not know about this ranking. The field of research he focused on is the diagnosis and prognosis of machines by utilizing artificial intelligence in computer programming algorithms which are currently known as machine learning (ML). He has been doing this research topic for a long time, since 2006 until now.

“The purpose of this research is to support a machine maintenance system in prescriptive way. It can diagnose machine breakdowns independently and automatically, predict the remaining useful life of the machine, and provide recommendations for maintenance actions that must be carried out by considering enterprise resource planning (ERP) data. The focus of the research also involves big data analysis and the creation of a digital twin model from a physical entity, which can be a machine/asset/system that is in line with the digitalization process in the Industrial 4.0 era,” he explained.

Asked about his hopes for Undip’s progress towards World Class University (WCU), Dr. Achmad Widodo said that Undip has been very good in responding to the WCU issue so that it can show its role in the development of science and technology globally. Further research needs to be continuously developed, as well as fundamental research development.

Head of Undip Secretariat and Protocol, Dr. Agus Suherman, S.Pi., M.Si, said that the Rector was very proud and gave appreciation of this achievement. Undip Rector hoped that this achievement would inspire the entire Undip academic community. “The Rector reminds us to not become complacent. Always improve yourself because the progress of the world is dynamic,” he concluded. (Lin/PR team)