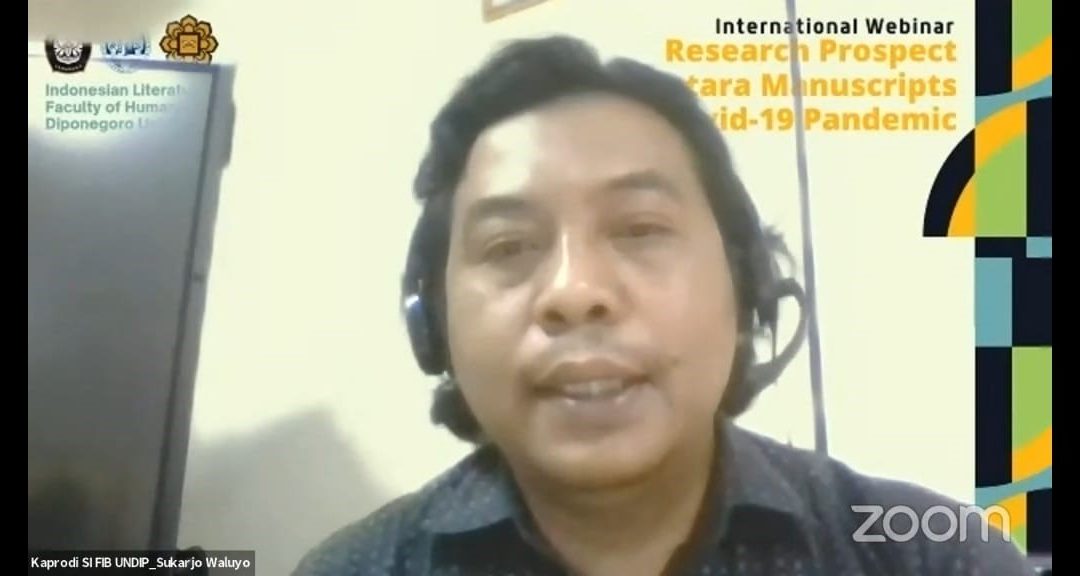 SEMARANG – The Indonesian Literature Undergraduate Study Program of Faculty of Humanities of Diponegoro University (UNDIP) continued to expand its network by collaborating with universities abroad. Most recently, Indonesian Literature Study Program of UNDIP collaborated with Leiden University of the Netherlands and International Islamic University (IIU) Malaysia as partners in research, teaching and institutional development.

The Head of Indonesian Literature Study Program of Faculty of Humanities UNDIP, Dr. Sukarjo Waluyo, S.S., M.Hum., expressed his goal to expand international cooperation networks as a response to the globalization era. “We continue to cooperate with universities abroad. We carry out these activities for development of research and teaching fields by exchanging lecturers in giving public lectures. In addition, there is also cooperation for the development and strengthening of institutions,” said Sukarjo Waluyo, on Tuesday (11/9/2021).

Considering the conditions of the pandemic, the cooperation has temporarily intensified with online public lectures, as well as online meetings to discuss important issues. “Most recently, we collaborated with Leiden University and IIU Malaysia in holding an International Webinar entitled “Research Prospect of Nusantara Manuscripts during Covid-19”,” Sukarjo added.

According to Sukarjo Waluyo, the material discussed in the webinar is the development of philological studies in Indonesia. Philological studies are emphasized on studying language in written historical sources, which are a combination of literary criticism, history, and linguistics. Various manuscripts and works of literary texts are examined for their authenticity from the making and determination of their meaning.

In fact, the text contained in a manuscript, especially those from the past, is often difficult to understand not only because of the difficult language but because the manuscripts have been copied over and over again. Under these conditions, there are variations that may contain errors.

Undip philologist, Dr. M. Abdullah M.A., said that the task of a philologist is to examine these manuscripts, make reports on the state of these manuscripts, and edit the texts contained in them. “Philology usually coexists with paleography, or the science of writing in the past,” he said.

In general, in the 1990s, the study of Nusantara manuscripts, or studies using Indonesian manuscripts as objects, experienced a decline. The orientation of manuscript studies has changed, pure philological studies or dissertations are very rare; because the texts that are considered the main ones such as Hang Tuah, the Malacca Law, the Minangkabau Law, and so on have been widely studied. “So, the potential for making studies outside of pure philology by taking new manuscripts is small. This becomes a challenge especially with the development of the digital world,” he said.

Meanwhile, Dr. Suryadi, M.A., a speaker from Leiden University of the Netherlands, revealed that the digitalization aspect is an important aspect, especially regarding written and classical materials. Previously, in the documentation, Microfilm Technology was used, so that written materials could be saved. The academic world managed to save some manuscripts that could still be read, even though the paper material which was the medium of the original material was already in a state of obsolescence or could not be clearly seen.

For example, in Indonesia there are still many old newspapers that are stored in libraries and have not been microfilmed. This is because the process involves costs and many preparations so that it becomes a challenge in this digital era. With the current update of information technology, the digitalization of old newspapers in Indonesia can be done immediately.

Several digitalization projects in Indonesia have been carried out. These include the digitalization of Javanese manuscripts by University of Indonesia (2009), the C-DATS-TUFS project (Palembang, Padang, Aceh, 2003), the Leipzig University project in the Projekt zur bewahrung der handschriften von Acheh (2007), the project digitizing manuscripts of Keraton Yogyakarta, Surakarta and Cirebon (2010), and the Endangered Archives Programme (British Library, 2006). “The Covid-19 pandemic is an accidental test case for the industrial revolution 4.0. This pandemic has changed human perception of reality and then digital technology has emerged.”

Furthermore, the emergence of digital technology can bring different perceptions of reality. What we perceive as real and unreal is becoming increasingly difficult to distinguish. Hoaxes and real facts are difficult to distinguish. Transformation of books from conventional books to digital forms is unavoidable, including the changing of authentic manuscripts to digitalization of manuscripts. Here the role of scientists in digitalization becomes important.

Dr. Mohd. Affendi, M.A, from IIUM said that the large number of Malay manuscripts that talk about traditional medicine is an interesting object for further study. “Nusanatara is an area rich in ingredients for traditional medicines. In the future, it will be very relevant to conduct interdisciplinary research on philosophical studies with other fields of science, for example with medical and health sciences. Interdisciplinary studies will further advance perspectives from various disciplines,” he said. (PR team)