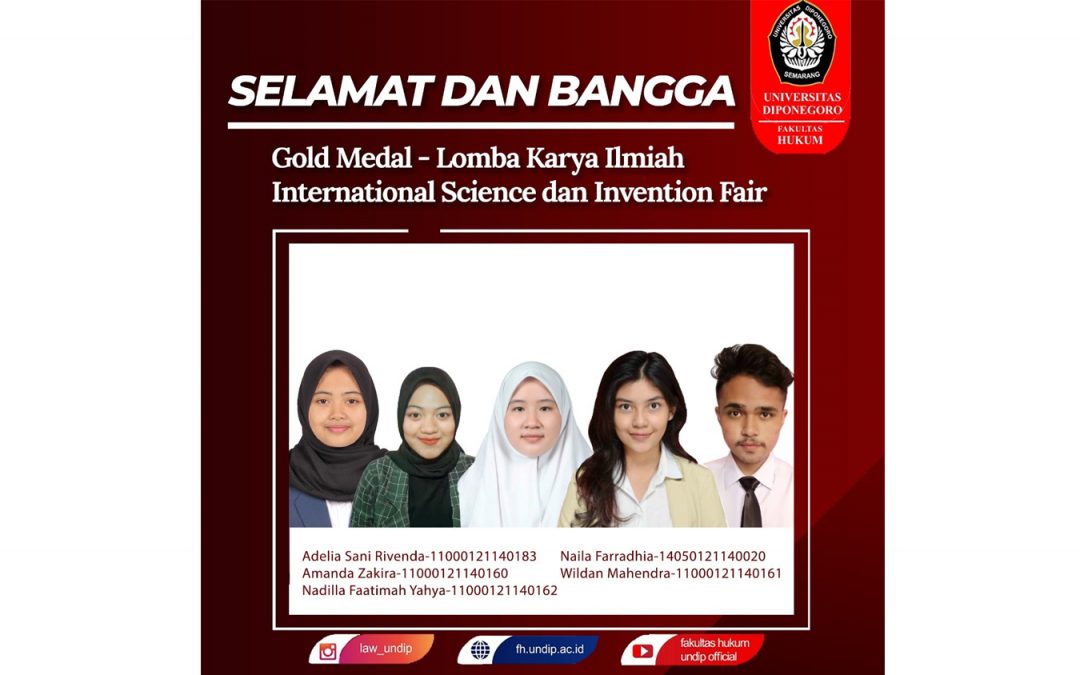 The success of the Undip team is quite surprising, considering that the submitted paper is not a theme from the field studied in college. However, the team consisting of Adelia Sani Rivenda, Amanda Zakira, Nadilla Faatimah Yahya, Naila Farradhia and Wildan Mahendra, managed to convince the jury through their scientific work on “Butterfly Pea Flowers as a Jam Solution for Blood Sugar Balance”. Their concern about the high rate of diabetics, especially in Indonesia and the risk of complications that result from it, resulted in important and useful work.

“Of course we feel very grateful to God Almighty for the achievements we have achieved. Previously, we felt insecure considering our status as new students and struggling with a new team,” said Wilda Mahendra, a member of the Faculty of Law Undip Team at the ISIF 2021 event to the Undip PR team, on Wednesday (10/11/2021).

Technically, the competition will be held from October 25th – November 1st 2021. Adelia Sani Rivenda, another team member, explained that the background for choosing the title and innovation was their concern of the high rate of diabetics, especially in Indonesia and the risk of complications caused by diabetes itself. Under the guidance of a lecturer of Faculty of Law Undip, Dr. Siti Malikhatun Badriyah S.H., M.Hum, the team succeeded in making an innovative jam product made from clitoria ternatea (butterfly pea flowers) which contains ingredients to overcome diabetes problems.

When asked about her own preparations, Adelia said that actually it was not running smoothly and thoroughly all the time. The time to find this innovative idea was very close to the registration time. In addition, the team members did not live in the same area, so that in the process of developing idea there were often failures in product manufacture.

“But because of the persistence of our team members, we remain optimistic and believe that our innovation can compete with other teams. And gratefully we are able to achieve the best position presented for the Faculty of Law and the Undip campus,” said Adelia.

Meanwhile, Amanda, a member of the team, said that she was very grateful to Undip, because in terms of facilities and publications, the Undip campus really supported the running of the competition and appreciated the achievements of its students. “However, as new students, I felt that facilitation of coaching and information of financing procedures as well as other socialization are considered to be less complete. Especially for new students, most of us are still not sufficiently educated about the administrative system in the world of competition that represents Undip,” she said.

She encouraged fellow friends from the Faculty of Law and other faculties at Undip to dare to step up, work and compete in various existing events. Be brave to start and be confident in expressing ideas, those are important factors to enter the competition. Another thing that must be done is to innovate that has relevance and urgency to the existing reality. “The point is, you have to be brave to start, create opportunities for yourself, and don’t stop because you don’t feel confident, but improve and start again,” she said.