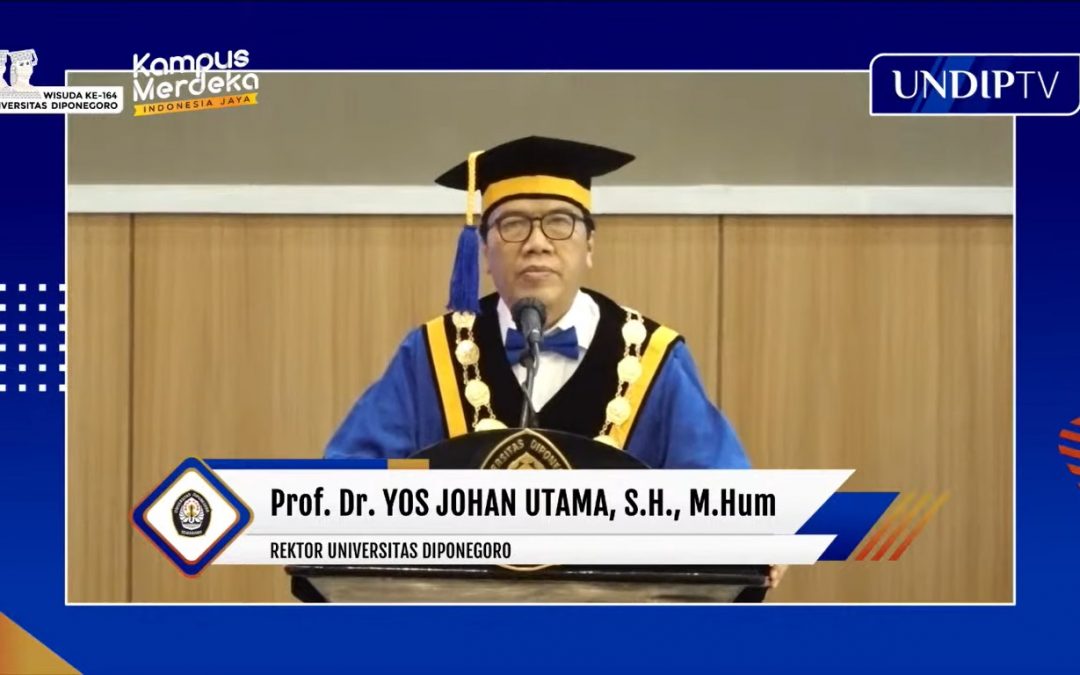 SEMARANG – Diponegoro University (Undip) Rector, Prof. Dr. Yos Johan Utama, SH, M. Hum., invited all parties to reject the pessimistic opinion and attitude about the generation that got virtual education and was limited in social, cultural and religious activities due to the Covid-19 pandemic, will be the lost generation. This speech was conveyed at a series of events for the 164th Graduation of Diponegoro University in 2021 which was carried out for two days starting on Wednesday-Thursday (November 10th-11th 2021).

At the event which was held using the Zoom platform and live streaming on Undip TV’s Youtube channel, Prof. Yos Johan  questioned, “Is that really the case?” The lost generation is a term coined by the American writer living in Paris, Gertrude Stein, to describe people who cannot get learning opportunities because of World War I.

The term was later used by renowned novelist, Ernest Hemingway, in the epigraph for his novel in 1926 entitled The Sun Also Rises: “You are all a lost generation”. They are called as lost generation because they did not get a normal education due to the war so they lost hope, faith and were in despair.

Currently, this perspective is used by some people related to the implementation of an online learning system, which is feared will produce a generation that is solitary and less tolerant because of the lack of opportunities to interact with others. “We all must reject this pessimistic point of view, because besides being faithful, Allah SWT wants the humans to be optimistic and having good prejudice, Ana Inda zhanni Abdi bi wa ana ma’ahu iza zakarani. On the other hand, Indonesia’s historical experience made it as a tough nation which is resistant to all changing times,” he said when giving a speech at the Prof. Soedarto, S.H. Building Undip Tembalang Campus, Semarang, on Thursday (11/11/2021).

Indeed, continued Prof. Yos, it is undeniable that a sudden change or industrial revolution 4.0 with disruption and the Covid-19 outbreak has changed the social order. However, it was emphasized that the fear of a lost generation can be overcome with strengthened faith and of course the existence of the family as the center of social education. It is the main pillar in development and moral education nowadays.

“Don’t be sad, you don’t have to worry about the current situation. Keep thinking positively and strengthen your faith. With God willing, we will be given the easy way in pursuing a career in the future according to Allah’s promise. Inna ma’al ‘usriyusron or indeed after difficulties there will be ease,” he said.

Based on the report of the Chairman of the Undip Academic Senate, Prof. Ir. Eddy. Rianto, M.Sc., Ph.D., IPU, the 164th Graduation of Diponegoro University was participated by 2,563 students. The participants consist of 29 people from doctoral program, 200 people from postgraduate program, 53 people of Specialists, 118 people of Professionals, and 1577 people from undergraduate program. Meanwhile, from the Diploma III program, there are 544 people and from the Diploma IV program there are as many as 42 people.

Besides congratulating the graduates, the Undip Rector also asked the graduates to be proud because they graduated from a university that is included in the ranks of the world’s universities (World Class University). The Rector said that being able to study at Diponegoro University was a proud achievement because the entry selection was very strict. Through the SNMPTN and SBMPTN selection paths, Undip is one of the campuses that has highest student candidates in position 2nd nationally. “You should be proud of being an Undip alumni because Undip is currently one of the best campuses in Indonesia with the best reputation at national and international levels.”

“Recently at the international level, Undip has proven that it has earned the title of first national ranking of QS Graduate Employability in terms of the speed and accuracy of graduates in getting a job. This is an undeniable achievement that shows the quality of education at Undip is the best at the national level and in the job market,” said Prof. Yos Johan.

In terms of governance, Undip is also ranked second nationally based on the achievement at the League of Legal Entity State Universities 2021. Not only that, Undip lecturers also have achievements in the national and international levels as well as alumni who currently occupy the highest positions in several fields of work, such as being the ministers, attorney generals, ambassadors and other respective occupation.

Excellent research products are trusted to be organized independently in the field of research. This is in accordance with Undip’s vision as an Excellent Research University. “With the blessings of Allah SWT, Undip has been received recognition both at the national and international levels,” said the Rector proudly. (PR team)