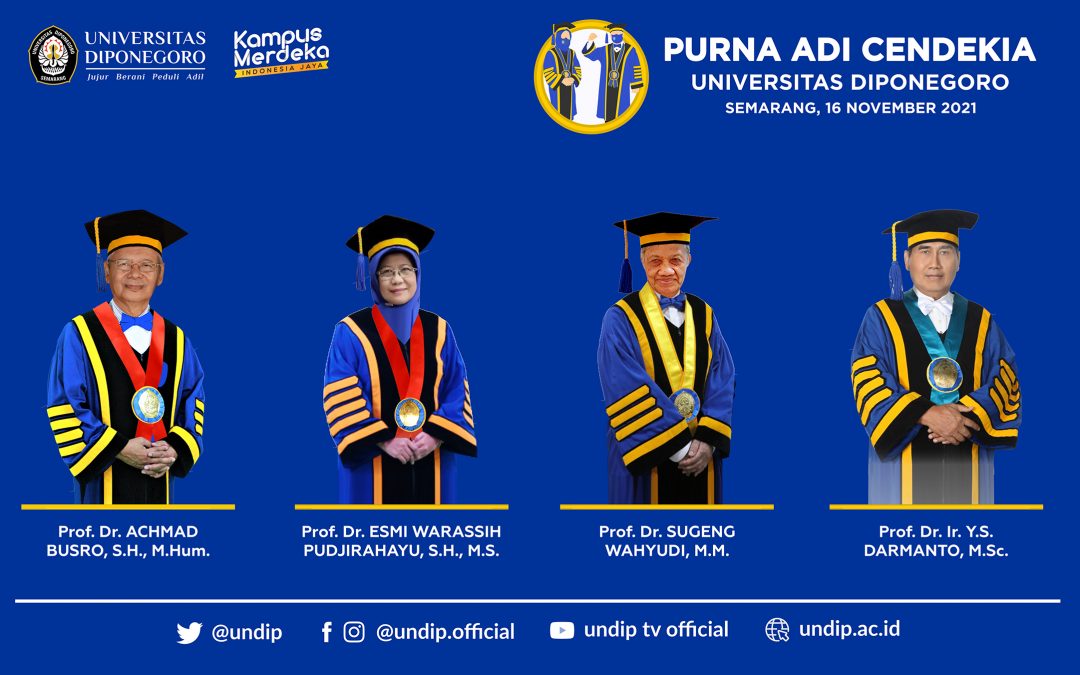 In his speech, Undip Rector, Prof. Dr. Yos Johan Utama, S.H., M. Hum. expressed his gratitude for the dedication of the four professors. “Undip is grateful for the dedication of four professors in maintaining integrity as educators and teachers. On behalf of Undip academic community, I am grateful because the professors have set good examples such as providing useful scientific competencies, writing books, conducting research, and making journals both nationally and internationally,” said Prof. Yos Johan.

Undip Rector explicitly stated that perhaps what was given by the state and Undip was still small compared to what professors had given to the nation and state, including Undip. However the professors who are now entering their retirement period remain loyal and devoted, without prioritizing their own interests, daring to give in for the sake of the common good.

To be sure, they have taught important advice namely the nature of tawadu’ and useful knowledge to students. The professors also have participated to solve the problems of the nation and state. “Hopefully the knowledge that has been taught will become a flowing goodness,” he said.

Even though the professors have officially entered their retirement period State Civil Apparatus, Undip still opens opportunities for professors who want to continue serving at Undip through award contracts. This is possible because it is the right of professors who have entered a period of retirement to be able to devote their knowledge.

The Chair of Undip Academic Senate, Prof. Ir. Edy Rianto, M.Sc., Ph.D., IPU., said that the Purna Adi Cendekia event was held in two sessions by considering the implementation of health protocols. Prof. Edy Rianto representing the Academic Senate also expressed his gratitude for the dedication of the professors in sharing their knowledge and insight so far. “Our hope is that the professors will continue to guide us in the educational process at Undip,” he said.

Prof. Dr. Sugeng Wahyudi delivered a retirement speech with the title “Collaboration, Acceleration and Welfare towards a Shining Undip”. According to him, collaboration, acceleration and prosperity towards a shining Undip is steps to make Undip as a excellent research university. “We all should be grateful for getting facilities from Undip. From the achievements of research and innovation, one of them is scientific publications listed in SINTA, SCOPUS and other national and international journals,” he explained.

In terms of scientific publications, Prof. Sugeng Wahyudi admitted that he was proud to be one of the contributors to the good name of Undip to achieve rankings at the national and international levels as an excellent research university through 62 research titles indexed in SCOPUS. “These achievements are not solely the result of individuals, but also collaboration with colleagues and students of undergraduate, postgraduate and doctoral programs. The results of collaboration showed in the achievement,” he added.

While Prof. Dr. Ir. YS. Darmanto, M.Sc. in his speech raised the theme “Fishery Waste for Industry”. “It should be noted that so far, fishery waste materials have only been used for mixed materials. Fishery waste include bones, thorns, fish scales and pearl shells which are used as mixed materials in food, such as crackers with crab shells,” said Prof. Darmanto.

From his research, crab shells, flower crab shells, and shrimp shells can actually be used as raw materials for chitin and chitosan which are useful in the medical field, namely as natural polymers (synthetic leather), fatty acid binders to reduce heart attacks, wrapping, fiber yarn for surgery suture, and thin membranes (contact lenses).

For the pharmaceutical field, chitin and chitosan are useful for lotions, gel thickeners, hair care, nail polish, skin care, and dental care. It can be the ingredients for food additives to strengthen and rejuvenate the liver, prevent and fight cancer cells, enhance the body’s immune system, and enrich the bacteria in the intestines.

Meanwhile, Professor of Faculty of Law Undip, Prof. Dr. Achmad Busro, S.H., M.Hum, delivered his speech entitled “Thank You to the Wise Leaders”. This civil law expert did not give a speech about scientific studies, but chose it as a momentum to convey his gratitude for all the opportunities given for him to do works and gain knowledge during his service.

“Since the beginning I entered Undip, I have always received academic and non-academic guidance and direction from faculty and university leaders, as well as colleagues. Even though I am no longer a State Civil Apparatus, my heart and soul remain here for the glory of Undip,” he said in a short speech.

As for Prof. Dr. Esmi Warassih Pudjirahayu, S.H., M.S., in the beginning of her speech, she wept at the memory of the seniors who had passed away. Prof. Esmi conveyed the results of the reflection she had obtained while studying and serving at Undip which was entitled “Humanist Law Realizing Spiritual Justice”. She shared this thought because justice has become an expensive item. It is even become a commodity which is difficult to access for those who are powerless.

“However, I remain optimistic because many have been able to realize (justice). Among them is the Supreme Court Justice, Artidjo, who is also a graduate of Doctor of Law program at Undip under the guidance of Prof. Satjipto Rahardjo. There are other names who are also able to achieve justice even though the process is not easy,” she conveyed. (PR team)