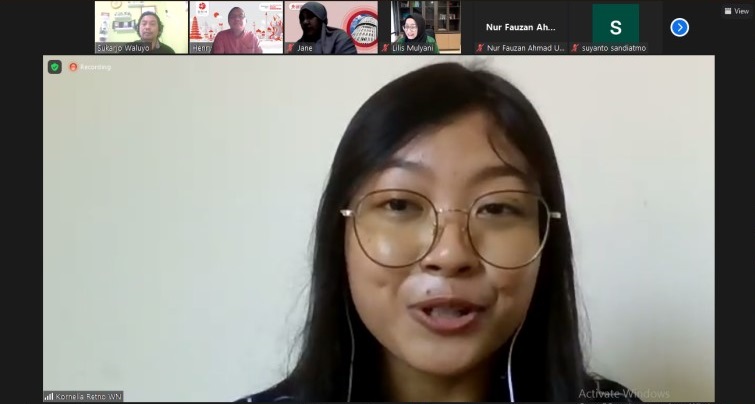 SEMARANG – The research result conducted by Kornelia Retno, a student of the Indonesian Literature Study Program, Faculty of Humanities (FIB), Diponegoro University (Undip), about gender in Java received appreciation from researchers at the National Research and Innovation Agency (BRIN). The results of the research, which were presented with the title “Speech of Abstinence and Gender Inequality in Javanese Society” revealed that there is still a gender gap between women and men in Indonesia.

In a presentation conveyed via Zoom meeting, Kornelia, who had an internship for two months as a research assistant at the BRIN Center for Community and Cultural Research, revealed that various speeches and taboos in Java still contain gender bias. “For example, the form of abstinence that has developed in Indonesia is when especially Javanese people such as ‘wong wedok ojo cewawakan’ which means that women should not laugh out loud,” said Kornelia, who becomes the student of  Indonesian Literature Study Program of Faculty of Humanities Undip in 2018.

Another expression that contains a gender bias in Java is “wong wedok ki sing alus, sopan, sumeh, ojo jegadul”. This means that the woman must be gentle, polite, smiling, not frowning. Whereas in social etiquette, a polite and friendly attitude should apply to both men and women.

Kornelia said that gender inequality has even been enforced since the early age of women. Girls are prohibited from playing football which is manifested in the expression “wong wedok ojo seneng bal-balan, tapi dolanan boneka utawa pasaran wae” which means that girls are not or taboo playing ball, it is more appropriate for them to play with dolls and shop at the market.

Approaching adulthood in the period approaching the age of marriage, women in Java are also still experiencing gender pressure through various developed speeches. There is a growing understanding that women have to maintain their domestic role through the words “wong wedok kudu iso masak, gawean omah, kudu duwe anak ben disayang bojo”. This means that women must be able to cook, do household chores, and have children to be loved by their husbands.

Another saying is “wong wedok ojo kesuwen ngelajang, ndang rabi, mengko ndak dadi perawan tuwo”. This means that women should not stay single for too long, get married quickly so that women would not become spinsters.

In the discussion session hosted by Fanny Henry Tondo, a senior researcher who is mostly involved in ethnicity research, nation building, and multiculturalism, Thung Ju Lan, M.Sc., Ph.D. Thung, presented and appreciated the development of interdisciplinary research. According to him, research with local language data can also be related to ideology or interest in how the Javanese language data can emerge and be quite popular and widely known as a common diction in Javanese society.

Dr. Sukarjo Waluyo, S.S., M.Hum., Head of the Indonesian Literature Study Program of Faculty of Humanities Undip expressed his pride at the forum which was attended by around 20 senior BRIN researchers and several lecturers from the Indonesian Literature Study Program. Sukarjo also appreciated the research carried out by his student as part of an effort to build a research tradition among academics.

To be sure, he hoped that new studies will be born in the scope of interdisciplinary literary studies, especially those scope of studies related to the Covid-19 pandemic. They are considered to have changed socio-cultural values which have an impact on changing people’s mindsets, attitudes and behavior. “This condition makes the relationship of solidarity and human kinship as social beings eroded and shifted to new values and mindsets of life,” said Sukarjo Waluyo, on Thursday (11/18/2021).

He hoped that the collaboration between the Indonesian Literature Study Program of Faculty of Humanities Undip and the BRIN Center for Community and Cultural Research can continue, especially for the implementation of student internship programs and joint research. (PR team)