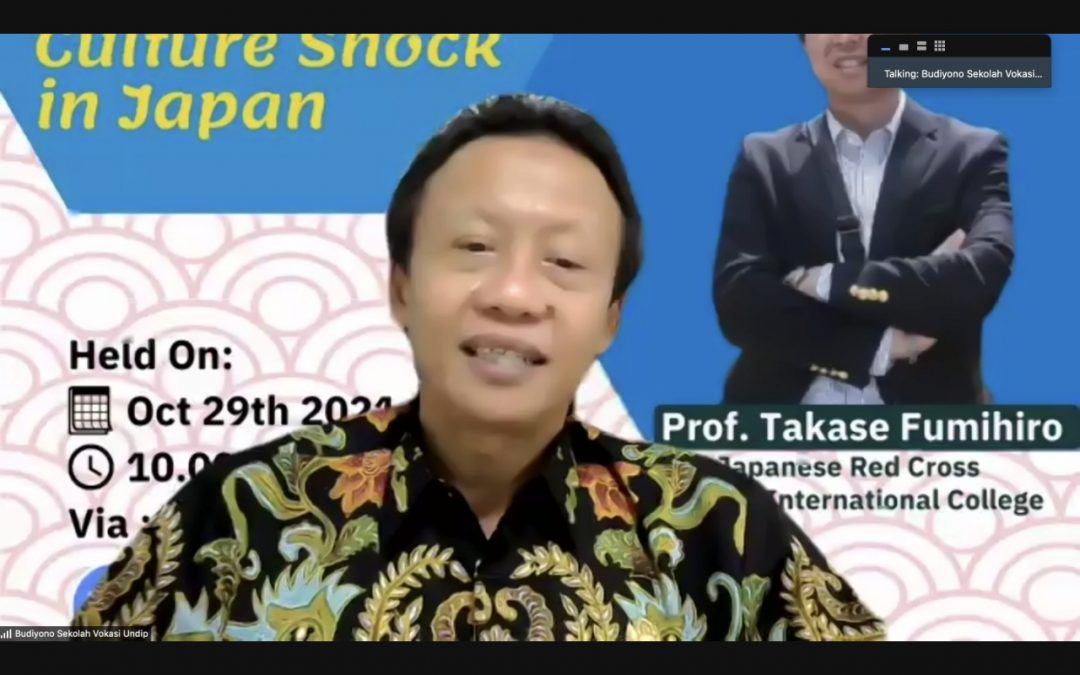 SEMARANG – The Vocational School of Diponegoro University (Undip) has successfully completed the five sessions of Visiting Professors with Prof. Fumihiro Takase from The Japanese Red Cross of Kyushu International College. The activity, which was held from September to the third week of November 2021, apart from being attended by students and lecturers, also received the attention of various parties who have an interest in the development of vocational language.

The series of activities aimed at broadening the horizons and experiences of lecturers and students are carried out using the WCU (World Class University) standard which requires a minimum of 10 hours meeting of the visiting professors program. Therefore, Undip Vocational School held five sessions where each session lasted for two hours. Each session raised a different theme, so that the scope of the discussion provided was varied and interesting to follow.

In the first session, the online activity carried the theme “Intercultural Understanding”; in the second session raised the theme “Culture Shock in Japan”; while the third and fourth sessions will be held simultaneously on November 5th 2021 with the theme “Communication, Lifestyle, and Work in Japan”. As the closing of the series of activities, the fifth session of the visiting professors raised the theme “Learning and Teaching Foreign Language through Movie”. These series of activities were attended by at least 300 participants at each session.

Prof. Takase is a skilled translator who has translated many books, film scripts, and other important works from English into Japanese. The role of translators in Japan itself is recognized as very important in supporting the development of science and technology in the land of the rising sun. In Japan, many translators are included in certain specializations to meet the needs of human resources who have vocational foreign language skills.

The Applied Foreign Languages Study Program of Undip Vocational School currently has two concentrations, namely English and Japanese. However, the students of Japanese Language Program are also required to learn English, and vice versa. In the near future, Korean Language study program will be opened as elective program.

According to him, there is a fundamental difference between the applied foreign language program and the foreign language and literature program in the undergraduate study program. In vocational school, language teaching is focused on sector needs, so there are English or Japanese language courses for hospitality, translation, tourism, and business which also include languages for industrial needs. “In vocational school, literature and linguistic knowledge are not taught, although the four language proficiency standards which include listening, reading, speaking and writing are still met,” he said.

Meanwhile, the Dean of Undip Vocational School, Prof. Dr. Ir. Budiyono, M.Sc., hoped that from these activities, besides increasing student competence, it can also encourage and accelerate the formation of a Vocational Language Center (VLC). Currently, from the aspect of the program, system and curriculum as well as human resources, VLC is ready, but it still requires physical infrastructure so that the learning process can be carried out optimally.

The existence of VLC Undip is also expected to become a teaching industry for the practice of learning various specific vocational languages. These are prepared in order to equip the students with various skills to enter the world of work which is increasingly challenging. (PR team)