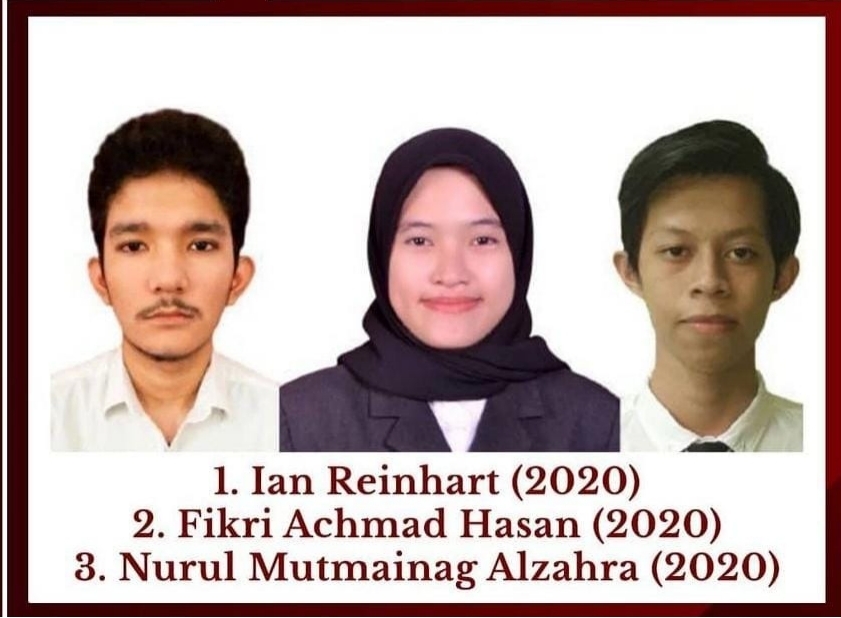 SEMARANG- The student team of Faculty of Law, Diponegoro University won 1st place in the  2021Asian Law Student Association (ALSA) Legal Writing Competition in the Legal Review category, which was held by the ALSA Local Chapter of Gadjah Mada University.

The theme “The Influence of Applying Patents on People’s Capabilities in Obtaining Essential Medicines and Its Relation to the Fulfillment of Human Rights”, which was raised by this team, was declared the best work of the works that entered the competition. The Faculty of Law Undip team consisting of Ian Reinhart, Fikri Achmad Hasan and Nurul Mutmainang Alzahra, was able to eliminate 16 other teams from various state and private universities in Indonesia.

“We are proud and surprised to be able to get first place in the 2021 ALSA Legal Writing Competition. We are also very happy to represent the Faculty of Law Undip to compete with other delegates from various universities in Indonesia,” said Fikri Achmad Hasan, one of the team members, on Wednesday (15/12/2021).

He explained that the Asian Law Student Association (ALSA) is an international non-profit organization whose members consist of law students from various universities in Asia. In Indonesia, since 1987, ALSA National Chapter Indonesia has been established. One of them is UGM ALSA Chapter that held a Legal Writing Competition which was divided into two categories, namely Legal Opinion and Legal Review.

“We chose to take part in the Legal Review competition to accommodate us as students majoring in law in increasing our interest and ability. It is an opportunity for us to write arguments in order to systematically review a statutory regulation,” Fikri added.

He also conveyed that the 2021 ALSA Legal Writing Competition, which was a series of activities held from October to November 2021, raised the theme “The Important Role of Legal Protection of Intellectual Property Rights in Encouraging Innovation in the Era of Globalization”. Regarding preparations for this competition, the Faculty of Law Undip team did a lot of preparation including arranging scheduled exercises and conducting the necessary research with the guidance of competent lecturers.

All team members get assignments according to their roles and interests. Regarding research, various national and international publications are studied and discussed together for further studies. Discussion points are also made carefully. After that the results of studies are constantly being discussed and refined.

As for the preparation process, another team member, Ian Reinhart, revealed the process. “We started writing and writing over again and then discussing. We revise each others’ drafts. We did legal reviews from start to finish by online discussion through Microsoft Teams and Google Docs facilities provided by the campus. Towards the last day of file collection, we succeeded in completing the legal writing file and sending it according to the schedule set by the committee. Thank God, during the announcement, our team became the best and won first place,” said Ian happily.

Regarding the various competitions that are currently being held, he saw them as a space for expression and training in various useful things which can be applied later when working in the community. He admitted that the Faculty of Law Undip has produced many quality graduates and achieved many achievements. Therefore, maintaining the big name of the faculty requires continuous and serious efforts.

The Dean of Faculty of Law Undip, Prof. Dr. Retno Saraswati, S.H, M.Hum., said that the faculty would always give maximum support to students through various fields and activities. The competitions and conferences that were attended by students of Faculty of Law Undip received full support from us. “We are grateful for the achievements of our students. I hope the students will continue to learn and innovate creative works,” she said. (PR team)