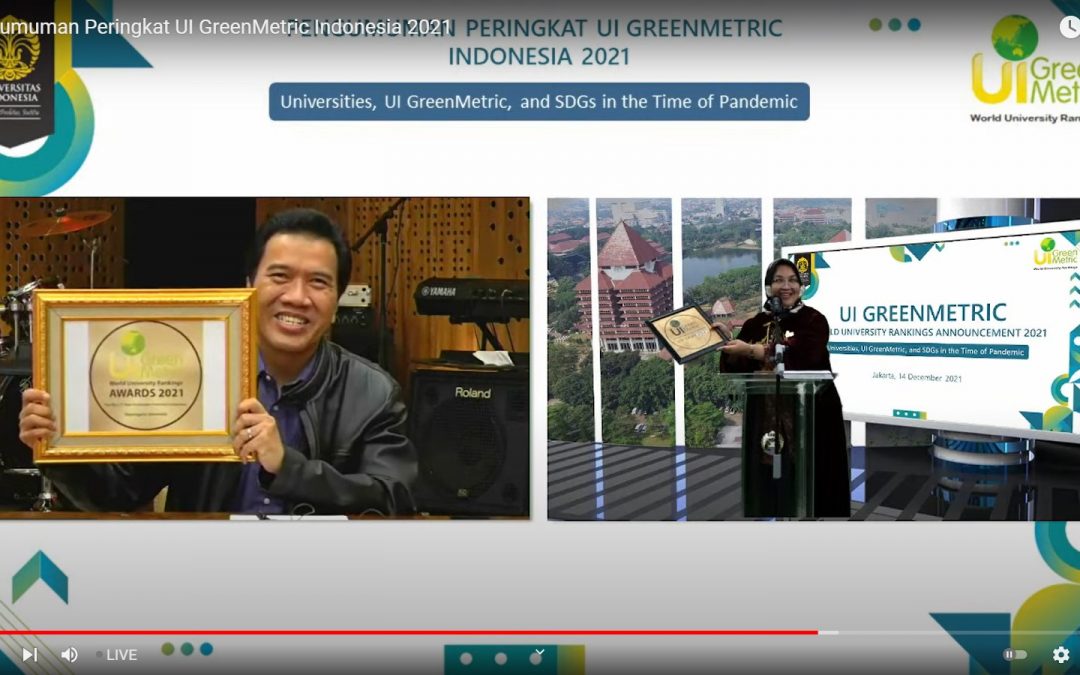 Undip Rector, Prof. Dr. Yos Johan Utama, S.H., M.Hum., after receiving the award admitted that he was grateful that Undip was again ranked second nationally. “The principle of development at Undip is based on two things, first the concept of gratitude, the second the concept of rahmatan lil ‘alamin,” said Prof. Yos Johan, on Tuesday afternoon (14/12/2021).

The concept of gratitude, said the Undip Rector, is when we are always grateful for God’s blessings, therefore we must maintain the sustainability of our environment. Both the preservation of nature, energy, water resources, our surroundings and everything. The concept of rahmatan lil ‘alamin concerns care, including concern for people with disabilities that must get access that can be easily utilized by them. In addition, Undip is also one of the universities that became the Fortress of Pancasila, with these two core concepts that became the basis for its development.

Prof. Yos emphasized that services to those who need special access must be prioritized. The efforts to get high rank in 2021 UI GreenMetric Rankings are the efforts to keep Undip as a university that continues to prioritize the concepts of gratitude and rahmatan lil ‘alamin. Prof. Yos also expressed his gratitude for the efforts made by UI to encourage universities in Indonesia to always care for the environment, and care for fellow human beings regardless of nationality and race.

It was also emphasized that we must maintain sustainability including implementing the Sustainable Development Goals (SDGs). On this occasion, the Undip Rector thanked Undip academic community who have collected data to be able to take part in 2021 UI GreenMetric Rankings, also those who have carried out developments that prioritize environmental sustainability, and all parties who have contributed so that Undip can maintain its ranking.

To be sure, Undip’s goal in participating in this activity is not to seek rankings, but as part of an effort to provide the best service for higher education. Prof. Yos closed his remarks by mentioning Undip’s motto, namely Undip must be better.

The 2021 UI GreenMetric World University Rankings is an activity initiated by UI since 2010 to measure the sustainability efforts undertaken by higher education institutions. The ranking is based on the framework of the Environment, Economy and Equity concepts. Chair of the 2021 UI GreenMetric Rankings, Prof. Dr. Riri Fitri Sari, M.M, M.Sc, before reading out the universities included in the 10 best rankings, stated that during the Covid-19 pandemic, the percentage of maintenance operations was only 40%.

The 10 Best Sustainable Universities in Indonesia 2021: