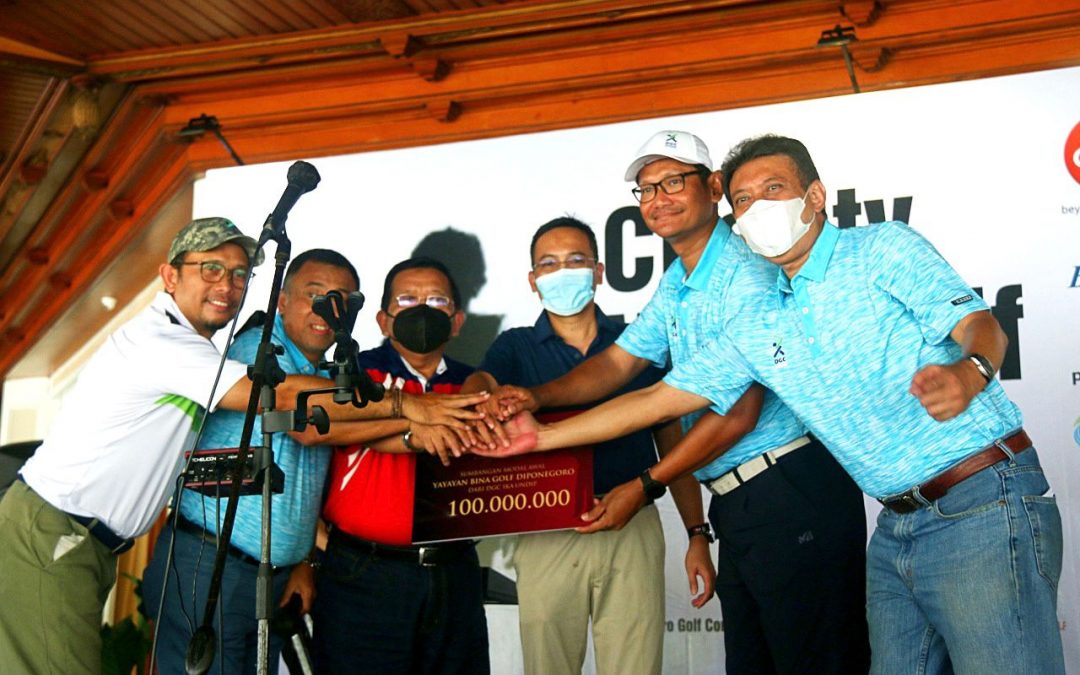 JAKARTA — Taking place at the Pondok Indah Golf Course on Saturday (18/12), Diponegoro Golf Community (DGC) held a golf tournament entitled “Golf with Charity”. This activity is not only a year-end agenda, but also aims to raise funds in order to conduct golf coaching in the Diponegoro University campus through the Yayasan Bina Golf Diponegoro.

Currently, Undip is the only state university that has Golf Student Activity Unit, starting in 2020 and inaugurated on April 11th 2021. Until mid-December 2021, there were 68 students who had actively become members of this activity unit.

The realization that golf requires consistent training and coaching, which of course requires a good budget and management, prompted the formation of the Yayasan Bina Golf Diponegoro. This noble intention then encouraged as many as 146 participants to participate in the “Golf with Charity” event at Pondok Indah Golf Course. From this weekend activity, funds of IDR 100 million were successfully collected and became a very valuable initial capital to further develop the Undip Golf Student Activity Unit.

In his remarks, the Head of Diponegoro University Alumni Association, Drs. H. Akhmad Muqowam said that the establishment of the Yayasan Bina Golf Diponegoro was inspired by the IGS event which was organized by CGF and Himpuni involving alumni and student athletes.

“I think competition in student athletes is also an important part of IKA Undip and DGC, that’s why we formed a foundation as collaboration between IKA Undip, DGC, and Undip. It is hoped that this funds will help improving the quality and motivate student athletes from Undip to continue to excel,” he said.

“First, we want to be able to produce students who have competence and character that are integrated with the values in golf, considering that golf is a hobby that can provide its own added value in international level assessment criteria. Thus, in the context of employability, the prospects for Undip graduates can be further improved,” said Prof. Budi.

“Second, we also want Undip to be one of the universities that is a pioneer in promoting golf. As a sport, golf has recently had a positive trend so that when recruiting new students, many of them have been interested in golf from the start. We think that we need to facilitate and direct them so that they can excel. With the support of alumni, through the Yayasan Bina Golf Diponegoro, of course this activity will be able to be followed by more students in Undip.”

Completing the explanation of Prof. Budi, Chairman of DGC, Lukman Hidayat added that as a participation of IKA Undip for golf activities, DGC is also committed to taking part in encouraging the achievements of students who are members of this Golf Student Activity Unit. “The presence of coaches and other supporting parties is a great contribution in facilitating the academic activities of these students while continuing to practice and excel in the field. Undip campus can set a great example in promoting golf.”