Strategy to Increase the Commercial Value of Diponegoro University Patents 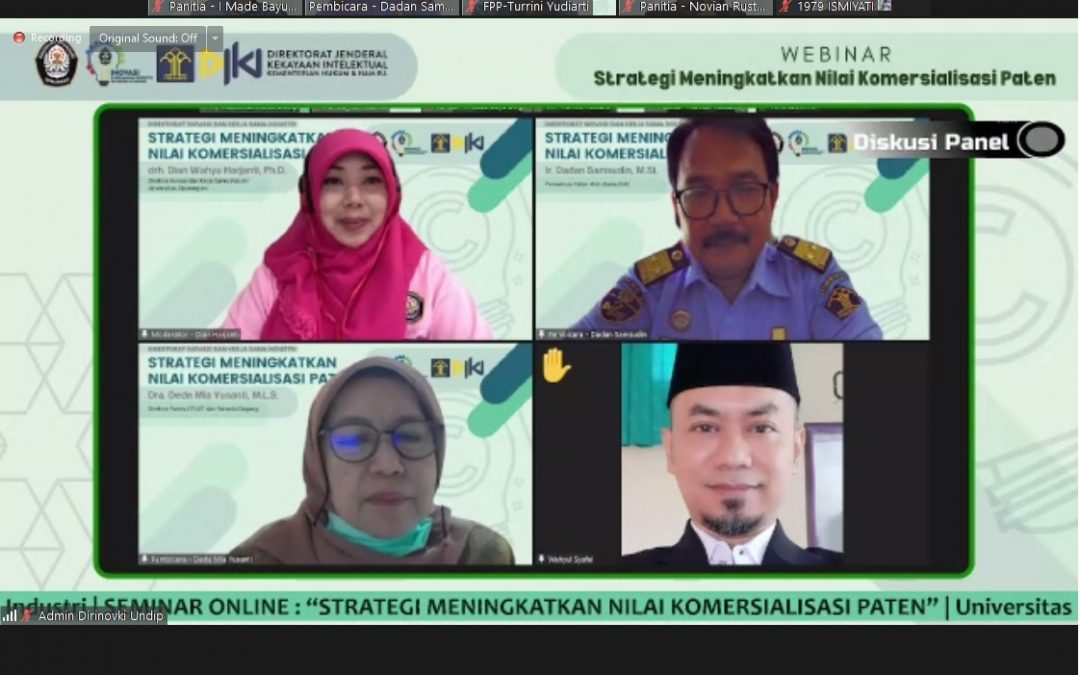 As an effort to increase understanding of intellectual property, especially patents and their commercialization for lecturers/researchers at Diponegoro University, the Directorate of Innovation and Industrial Cooperation organized a webinar with the theme “Strategy to Increase the Commercial Value of Patents”. The event was attended by participants from lecturers/researchers and inventors from all faculties within Diponegoro University, on Monday, December 6th 2021 via Zoom meeting and broadcasted live on the Dirinovki Undip Youtube Channel. More than 100 participants enthusiastically attended and participated in the event. The implementation of the webinar about Patent Commercialization is related to Goal 9 of the SDGs, which is to support industrialization with strong innovation management, and to build inclusive and sustainable infrastructure.

The Vice Rector for Research, Innovation and Cooperation at Diponegoro University, Prof. Dr. Ir. Ambariyanto, M.Sc. in his speech said that, since 2016 the number of patents has increased extraordinarily because of the role of UNDIP to participate in encouraging and registering patents, copyrights and other intellectual property rights from inventors who were also very enthusiastic and have extraordinary enthusiasm. In 2018 – 2019, Undip was awarded the highest number of patent registrations from all existing state universities in Indonesia. However, this is still not in line with the number of patents that can be produced and commercialized because there are missing links or gaps. The more patents granted, as there should be more technology products that can be commercialized.

The Vice Rector for Research, Innovation, and Cooperation also said that this year UNDIP has started paying the patent maintenance fee/annuity because it has entered its 5th year. The commercialization of patented products must be realized.

UNDIP’s Director of Innovation and Industrial Cooperation, drh. Dian Wahyu Harjanti, PhD said that patents do not only function to protect creativity and research results, but for the inventors to get economic benefits from their creations or inventions. In the future, it is expected that the number of patents will increase, followed by more innovative products that are produced and commercialized. If we talk about innovation, then innovation is not just an invention. An invention that has economic value is the real innovation. This event is a form of commitment to encourage the commercialization of technological products as a result of research by the UNDIP academic community, as well as to serve the needs of the industry in accordance with the Sustainable Development Goals (SDGs).

Dede Mia Yusanti as Director of Patents, DTLS and RD – Directorate General of Intellectual Property – Ministry of Human Rights of the Republic of Indonesia in her presentation conveyed several things related to the commercialization of patents, namely: the reasons why patents need to be commercialized; increasing the commercialization value of a product; and patent protection.

According to Dede Mia Yusanti, patents need to be commercialized because: Intellectual Property (IP) protection is important in trade; the value of IP is similar with economy; high research costs; rewards for intellectual works; the profit of patent commercialization can be used for further development in producing other patents of commercial value; invention without commercialization is not innovation (toughest challenge today, or part of the strategy?). Regarding these issues, we can check the data at: FORBES. on line. June 18, 2014, that: “In the United States: Of today’s 2.1 million active patents, 95 percent fail to be licensed or commercialized. These unlicensed patents include over 50,000 high-quality patented inventions developed by universities.”