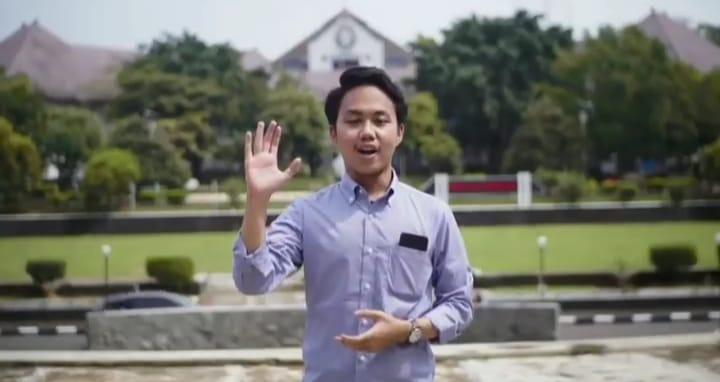 Akbar Malik Adi Nugraha’s work entitled “Literacy in the Post-Truth Era and Efforts to Correct Discourse on the Low Literacy of Indonesia” succeeded in eliminating other essays of participants from all over Indonesia. The organizing committee determined Akbar’s essay as the best essay.

“The essays that I have included in the competition are the result of observations and studies during various levels of education, where the term literacy is always echoed. Educators and educational authorities, including teachers, try to introduce the term literacy as early as possible to students. The work that I make is a reflection of the process experienced by students,” said Akbar.

According to him, literacy is not limited to the introduction of terms, but also a special program that continues and is ongoing. “It is still warm in the author’s memory, when in high school every morning students were required to read articles and write resumes from what they had read. He said, these are all literacy movements that aim to boost the nation’s literacy quality,” he added.

School and campus are the same. Campus as a womb that gives birth to intellectual candidates is obliged to emphasize the importance of literacy culture. Even so, in fact campuses or universities that are supposed to build civilization with literacy are often tainted with acts of plagiarism. It is done not only by students but also lecturers who have been proven to have committed plagiarism.

Therefore, in his essay, Akbar described the phenomenon of alleged plagiarism as a common problem that needs to be solved. There is an irony, because on the one hand educational institutions are campaigning for the literacy movement but at the same time there are acts of plagiarism committed by elements of the academic community.

In the post-truth era, this phenomenon needs serious attention because in general the quality of literacy in Indonesia is not good or even bad. Referring to the World’s Most Literate Nations Ranked survey conducted by Central Connecticut State University (CCSU) in 2016, Indonesia ranks 60th from the 61 countries surveyed.

Other indicators can also be seen from the assessment of 2018 Program for International Student Assessment (PISA) which conducted a study to test the quality of children’s literacy, and resulted that Indonesia was ranked 72 out of 77 countries surveyed. Reading the results of the two studies, said Akbar, we need to find out the problem, including understanding the meaning of CCSU and PISA and the benchmarks for literacy quality.

”When we just believe that Indonesia is one of the countries with the lowest literacy quality in the world without wanting to verify the strength of the study results, then we have fallen into the glorification of the study results. The results still need to be questioned for its interpretation and validation,” explained the student of Indonesian Literature Study Program class of 2018.

By understanding the indicators and their parameters in depth then we can improve literacy quality. What is certain is that in the era of the digital revolution, the information is varied so that we should improve the quality of people’s literacy. Ease of access to information, as well as the role of everyone not only as consumers but also producers of information, demands a better quality of literacy so that the wealth of information can provide positive benefits to the community, not the other way around.

Responding to the achievements of his students, the Head of Indonesian Literature Study Program of Faculty of Humanities Undip, Dr. Sukarjo Waluyo, S.S., M.Hum, said he was very happy and proud. “As the Head of Study Program, I continue to make a map of the potential of human resources of the students. Among them are through training and mentoring so that they can continue to make achievements. I see the potential is abundant and will continue to excel in the future,” said Sukarjo Waluyo, on Tuesday (12/14/2021).

Sukarjo said that all programs in the study program he led must be in line with steps to support Faculty of Humanities Undip to become a leading research faculty in Southeast Asia by 2025 in the field of culture which includes literature, language, history, anthropology, libraries, philosophy, and archives. “The initial objectives should not be forgotten,” he concluded. (PR team)