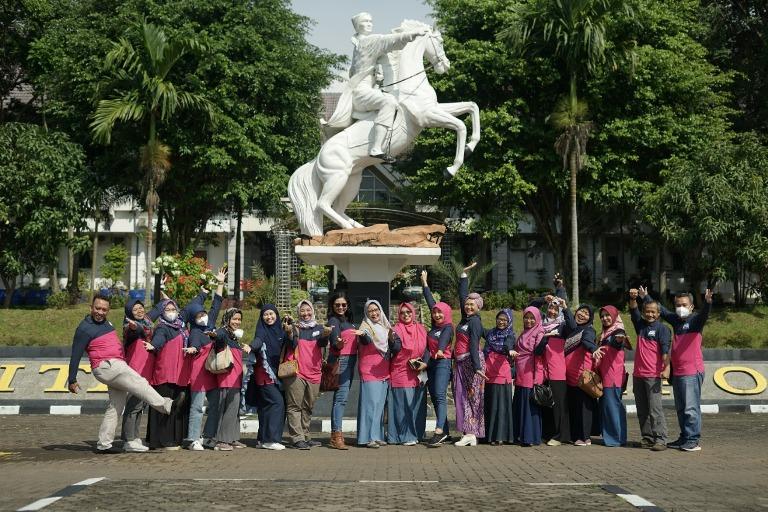 The Chairperson of the Committee for the Silver Reunion for 25 Years of Psychology 96 Undip, Sugeng Supriyono, said the activity entitled “Yonan (Yoo… Ngumpul Tenanan)” on Sunday (12/12/2021) was full of solidarity and joy. “The purpose of holding an event to commemorate 25 years of Undip Psychology 96 is to strengthen the relationship between fellow Undip Psychology 96 alumni and as a form of appreciation for the current achievements of the Faculty of Psychology Undip,” said Sugeng Supriyono, on Friday (12/17/2021).

According to him, the theme and names of the events were made uniquely by taking the names of several alumni, such as Yonan, Hawa, Lintang, Utami, and Dani, as a form of solidarity from the Undip Psychology Class of 96. The alumni came from a number of cities, both from Java Island and outside Java. The event was also attended by the Dean of Faculty of Psychology Undip, Prof. Dian Ratna Sawitri S.Psi., M.Sc., Ph.D, and 21 pioneers of Faculty of Psychology Undip consisting of 13 lecturers and eight education staff.

Prof. Dian Ratna Sawitri said that alumni are an inseparable part of the alma mater. ‘”Alumni are also one of the significant forces to strengthen and develop the campus,” she explained.

At that moment, Prof. Sawitri expressed her gratitude for the assistance from alumni and hoped that it could be useful for the alma mater, especially for the younger students who have great potential and really need financial assistance to support the completion of their studies on time.

The Silver Reunion for 25 Years of Psychology 96 Undip began with the Lintang (Keliling Tembalang) activity, a touring around Undip Tembalang Campus by taking a bus. The alumni felt nostalgic when taking around Undip campus, especially the campus building that used to be a place to continue studies, such as the area of Faculty of Science and Mathematics (previously named FMIPA) and the area of old Faculty of Psychology which is now divided into the Faculty of Medicine and the Faculty of Public Health.

The Tembalang tour ended with the planting of six trees in the yard of the Faculty of Psychology, in form of one Tabebuya tree and five Longan trees. The activity continued in the Hall of Prof. Darmanto Jatman with the theme “Utami&Dani” meant Gathering and Prayer for Alumni and “Hawa (Harapan Mahasiswa)” meant Students’ Hope. The event was broadcast online via the zoom platform so that alumni who could not physically attend could follow.

Meanwhile, the souvenirs for eight educational staff were given to Kustantini, S.Sos., M.Si, Tri Sulistiani, S.Psi., S.Hum, Markam, Soetarto, Nuryati, Nursidi, Moch. Subiyanto and the family of Khambali. The series of activities was closed with a prayer together and farewell between alumni and invitees who attended. (PR team)