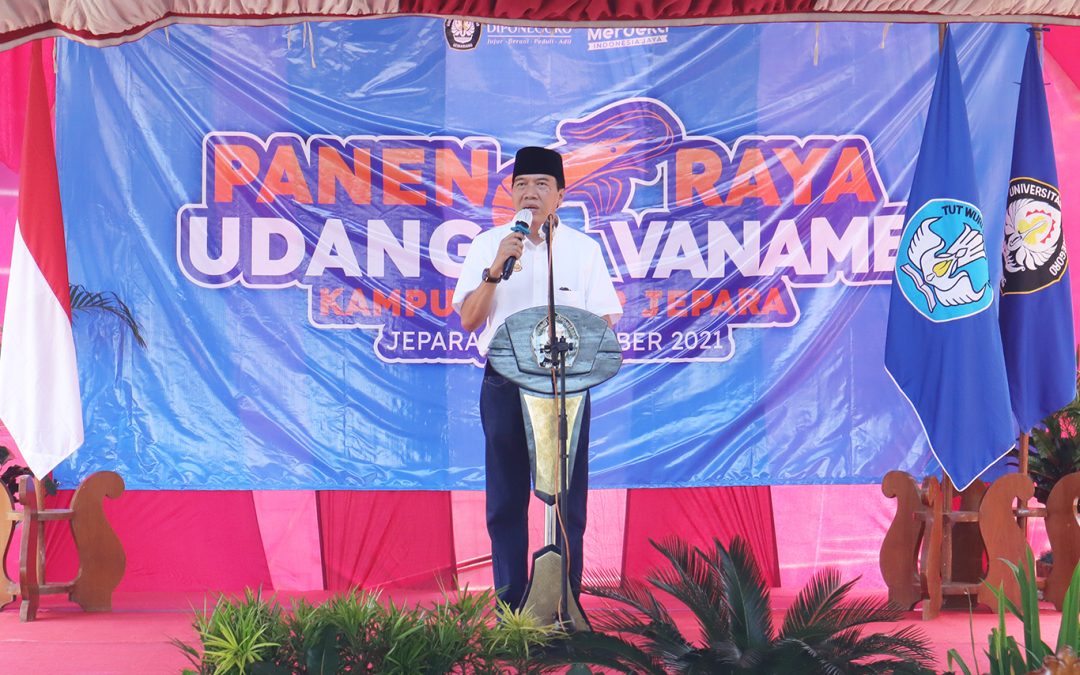 “Ponds don’t have to be on the seafront, we can fish anywhere. The fourth generation pond that Undip will build is a pond that resembles a motorcycle racing circuit. These are what we can dedicate to our children that we have a variety of ponds,” explained Prof. Dr. I Nyoman Widiasa, S.T., M.T. as the Director of Science and Techno Park Undip.

Prof. Nyoman added that the vannamei shrimp cultivated at MSTP was one of the aquaculture products. Vannamei shrimp, which has the Latin name Litopenaeus vannamei, was chosen to be cultivated because this type of shrimp is able to live in a wide salinity range, is able to adapt to low-temperature environments, has a high survival rate, has good resistance to disease and has high economic value.

In addition, currently vannamei shrimp is an Indonesian fishery commodity that has great potential for cultivation. Quoting from the Greeners page, Indonesia ranks as the third largest shrimp exporter in the world market after Thailand and India. Among various types of shrimp, vannamei shrimp is the main commodity for exports. It is hoped that in the future, the MSTP at the Undip Jepara campus will become one of Undip’s sources of income as Legal Entity State University (PTNBH).

“This activity at MSTP became one of Undip’s businesses, to meet the needs of Undip as a Legal Entity State University. This MSTP is very useful because it can also be used as the practice field related to Undip’s technological innovations. Students and lecturers can conduct research here, especially in the field of shrimp cultivation, from breeding, sales process, to the management,” said Undip Rector, Prof. Yos Johan Utama, SH., M. Hum.

Prof. Yos stated that the research conducted by Undip at MSTP has proven successful after harvesting shrimp. Usually shrimp harvest in traditional ponds only produce about 2 tons, but with the pond model and water treatment innovations from Undip, shrimp harvest can reach 3.5 tons from one pond. It is hoped that the harvest scale for ponds in MSTP can be increased again.

“Diponegoro University is one of the universities that has the largest MSTP. MSTP in Jepara concentrates on fisheries. Therefore, the system built is a supply chain in the fisheries sector. We have to control everything from breeding to distribution because in the fisheries sector this is very important for Indonesia’s nutritional needs. Therefore, I encourage the existence of this STP (Science Techno Park) which is able to provide better academic development in the field of fisheries. In the future, hopefully it will become an innovative STP,” said Prof. Mohamad Nasir, Minister of Research and Technology for the period of 2014-2019 who currently serves as Chair of Undip Board of Trustees.

Prof. Muhamad Nasir expressed his hope about development of this STP in the future to produce research and doctors in the field of fisheries.

“Development of this STP in the future must be able to produce research for researchers as well as produce doctors in the field of fisheries. The innovations resulting from this research must be able to establish an industry which is able to generate revenue for Undip. The revenue can be used for providing the necessities so that the burden of students will not be not too high because it can be funded by the STP in Jepara,” said Prof. Mohamad Nasir.

The hope of Prof. Mohamad Nasir was also in line with the speech of Prof. Yos in front of invited guests and Dharma Wanita Persatuan (DWP) Undip who also attended the vannamei shrimp harvest.

“The benefit of MSTP is not only in the field of education, its business sector and also the development of technology can strengthen Undip’s position as a research university that is beneficial to the people. MSTP Teluk Awur Jepara is one of the major parts of the Diponegoro University campus which is managed based on the values of compassion and rahmatan lil alamin. In addition to providing blessings and prosperity for Undip, it also provides benefits to the surrounding community,” concluded Undip Rector.

MSTP Diponegoro University, located in Teluk Awur, Jepara district, Central Java, was built on an area of 52 hectares. Currently, MSTP Undip has 8 box ponds, 18 circular ponds, one semi-indoor shrimp pond, laboratory, and cool storage worth IDR 10 Billion with a capacity of 200 tons. The existing facilities are expected to support the implementation of field practice and training for Undip students as well as vocational students. No less than 100 students can be accommodated per year. Together with the Undip business unit and strategic partners, MSTP Undip continues to develop hatchery and pond facilities to realize a production capability of 400 tons per year. (Utami Setyowati – Hariyani)