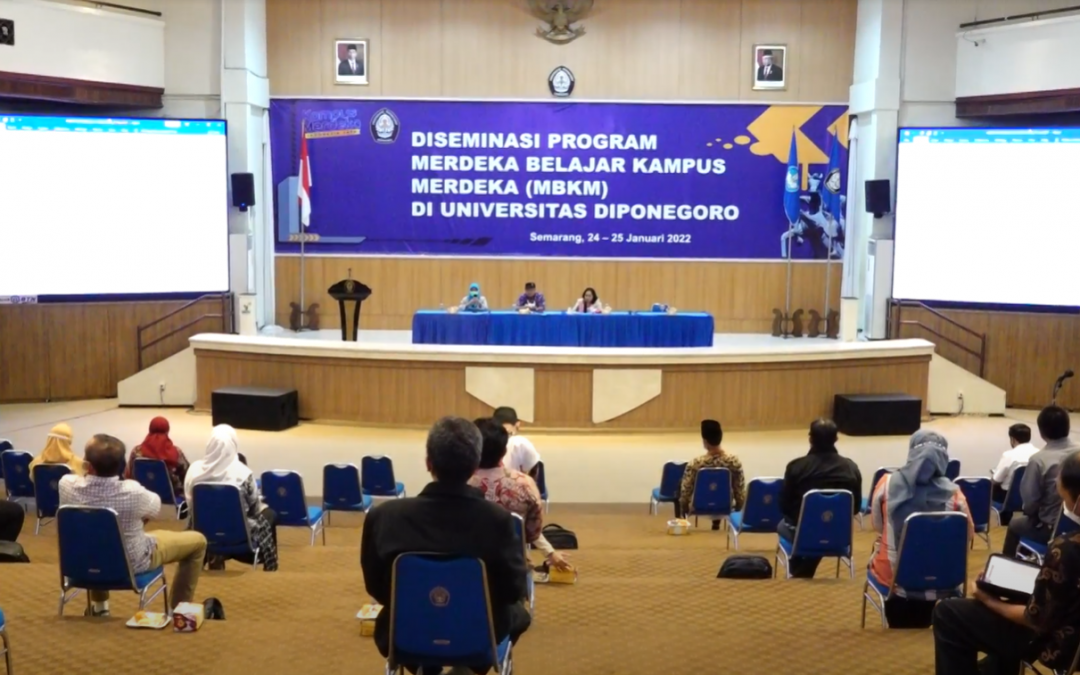 Free Learning – Independent Campus Program (MBKM) which was initiated by the Minister of Education and Culture, Nadiem Makarim in early 2020, is increasingly being followed by students. Currently, the MBKM program has been implemented by a number of universities. However, to be able to implement this policy, universities must prepare themselves to be able to run this program in accordance with the characteristics of the university and its resources.

Rector of Diponegoro University, Prof. Dr. Yos Johan Utama, S.H., M.Hum., ratified the Rector’s Regulation Number 17 of 2021 regarding the provisions for the implementation of MBKM. The implementation of Rector’s Regulation was continued with the Dissemination of the Free Learning Independent Campus Program (MBKM) which was held on Monday – Tuesday (24-25/01) at the Prof. Soedarto Building, Tembalang.

The event aimed to present Rector’s Regulation Number 17 of 2021 which was led directly by the Director of Academic, Student Affairs, and Alumni, Hanifa Maher Denny, S.KM., MPH., PhD., as well as to explain the technical instructions for the MBKM program which was conveyed by Undip MBKM Coordinator, Dr. dr. Sri Winarni, M.Kes.

In her presentation, Hanifa said that Undip would target the conversion of 20 full credits to 17 thousand students at Undip. This target refers to one of the main indicators of the KPI which states that universities must have students who have off-campus experience.

Several steps can be taken to improve the KPI, namely by holding credit conversions, both from MBKM activities and achievements at the national level, as well as collaboration between study programs at universities. Furthermore, to facilitate the credit conversion process, Undip has established a conversion team consisting of the Dean, Vice Dean, Department Head, Head of Study Program, Head of Unit, Chair of Faculty Senate, and lecturers.

“We need to support the freedom of learning from MBKM. Even so, don’t let MBKM hinder the courses and make the lecture duration longer,” said Hanifa.

Deputy Director of Academics, Student Affairs, and Alumni, Dr. eng. Agus Setyawan, S.Si., M.Sc. said that this year there were only 9,900 students who took part in MBKM program and the Rector’s Regulation Number 17 of 2021 made us steady to move forward.

Undip’s stability in organizing MBKM is also driven by the existence of the MBKM management team that will assist and facilitate the coordination of each study program. MBKM in this case can include student exchanges with other study programs within universities, exchanges with the same study programs outside universities, exchanges with other study programs outside of universities, and learning at non-university institutions. Even so, the Rector’s Regulation Number 17 of 2021 still provides a regulation that students who take part in MBKM must have taken 100 credits and meet other requirements. The goal is that students have the mandatory competencies that are taken in semesters 1 – 5 which will later become provisions for educating the community. (Riz and the PR team)