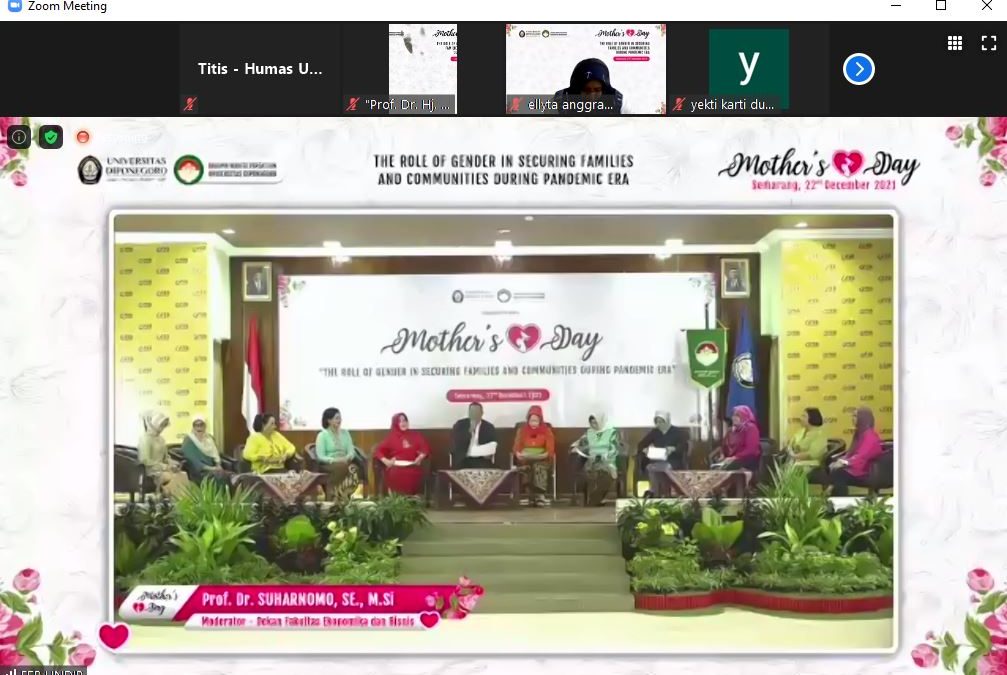 Semarang (22/12) – Being a leader in educational institutions is not only responsible for providing quality education, but also being sensitive to current issues with discussions that create real solutions. Based on this goal, the DWP (Dharma Wanita Persatuan) of Diponegoro University held a “Talk Show for the Deans of Women and Great Mothers of Diponegoro University” as a series of the DWP Undip International Webinar in commemoration of National Mother’s Day 2021.

From a historical perspective, Prof. Dr. Dra. Dewi Yuliati, M.A. explained that the spirit of women’s struggle was greatly influenced by the spirit of RA Kartini who boldly raised socio-cultural issues. From the letters she sent to her friends in the Netherlands, RA Kartini revealed that the struggle of Indonesian women was still long and there were many things that need to be addressed.

Prof. Dr. dr. Tri Indah Winarni, M.Sc., Med, PAK from Faculty of Medicine Undip stated that almost 70% of health workers in Indonesia consist of women. Therefore, the role of women in the public sphere should not be underestimated, because women act as role models, child care, and health care.

Especially during this pandemic, health is a top priority and is not only about physical health but also includes mental health. Dr. Dra. Sulistiyani, M.Kes. from Faculty of Public Health Undip conveyed the message that the roles of men and women in the household must be divided equally. Playing roles as wives and mothers, women’s mental health also an important matters to be take care of since being happy can spread positivity to the families.

Prof. Widowati, S.Si., M.Sc. said that mathematics is a science that is applied to almost every aspect of life. Therefore, women must master it because regular financial management is very important in the household. In addition, mathematics is also a very fun science to learn.

With the theme “Gender Equality in Millennial Culture”, the Dean of Faculty of Humanities Undip, Dr. Nurhayati, M. Hum. states that gender roles are cultural constructs that must be straightened out. In modern times like today, the perspective on breadwinning and family income where the women whose income is more than their husbands is said to be underestimating men is starting to fade. Nurhayati explained that the belief system and the media put forward the idea that men are leaders. However, Undip can prove that women can also be leaders, as indicated by the presence of five great women who are currently Deans of the Faculties.

Looking from the perspective of society towards education in Indonesia, which still views vocational education as a second class, Anggun Puspitarini Siswanto, S.T., Ph.D stated that she has a vision and mission to break the stigma. Anggun emphasized that vocational school graduates are also competent and can become superior human resources in the world of work.

Directly involved in empowering Indonesian women, Prof. Dr. Ir. Erni Setyowati, M.T. told about her project in collaboration with local women. Moving together to become productive women, Erni invites housewives to form MSMEs that produce products made from water hyacinth. The product has also been used at Undip, one of which is in the Prof. Soedarto Building.

Representative from Faculty of Social and Political Sciences Undip, Prof. Dr. Dra. Ari Pradhanawati, M.S. stated that the role of women in the public sphere as much as 30% is increasingly being enforced. Continuing the statement, Dr. Fitriyah, M.A. agreed but she added that it was not easy for female DPRD representatives to occupy higher positions. Besides colliding with domestic roles, patriarchal society that prefers men to be leaders makes women representatives lose their votes in general elections.

Having the same vision to improve women’s welfare, Prof. Ir. Tri Winarni Agustini, M.Sc., Ph.D from Faculty of Fisheries and Marine Sciences Undip and Prof. Dr. Ir. Florentina Kusmiyati, M.Sc from Faculty of Animal and Agricultural Sciences Undip created a technology-based program to facilitate the work of women who work as fish collectors and farmers. Despite working in the open spaces, these women do not have to work with many obstacles because they are supported by adequate technology and facilities.

While Prof. Dian Ratna Sawitri, S.Psi., M.Sc., Ph.D from the Faculty of Psychology Undip explained that learning agility is important for women. Empowerment of women is carried out over time because the skills that are continuously honed will also be beneficial for children and the next generation in the future.

Prof. Dra. Indah Susilowati, M.Sc., Ph.D said that the 5th goal of the SDGs, namely Enforce Gender Equality has been carried out continuously in Indonesia and the program must be continued to achieve gender equality in various sectors.

Closing this discussion, Vice Rector IV Undip, Prof. Dr. Ir. Ambariyanto, M.Sc. thanked the speakers on this talk show. “Thank you for the enthusiasm of the webinar participants, which has almost reached 300 participants. Hopefully it will provide useful knowledge, an extraordinary generation was born from an extraordinary mother,” concluded Prof. Ambariyanto. (Titis – Public Relations)