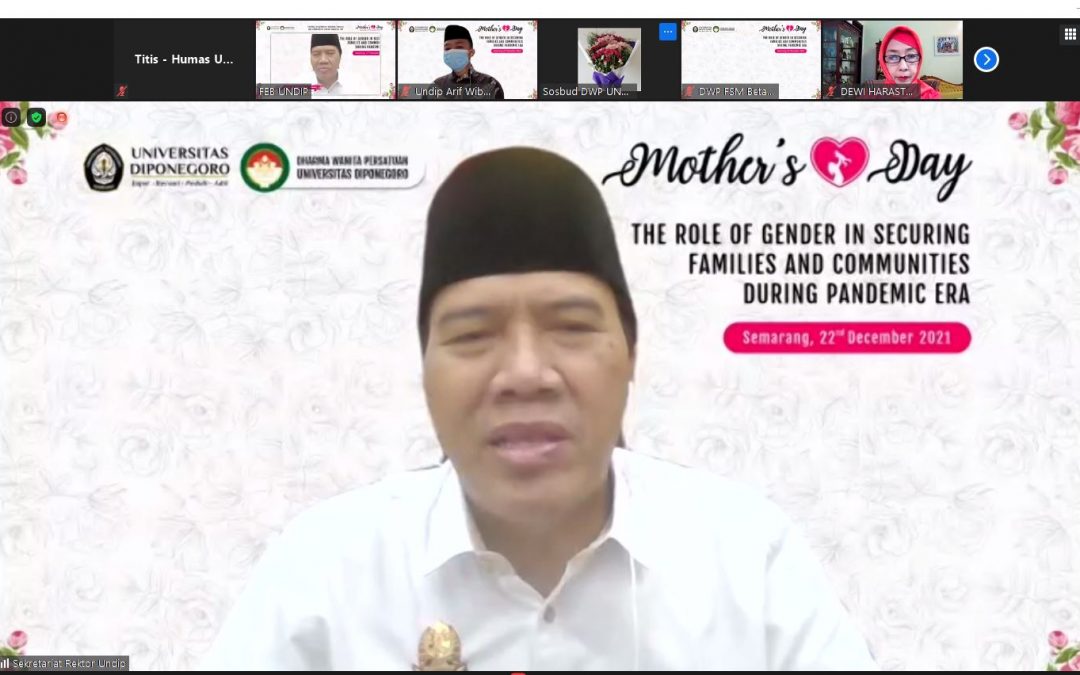 Semarang (22/12) – Coinciding with the 93rd National Mother’s Day on December 22, 2021, the DWP (Dharma Wanita Persatuan) of Diponegoro University once again voiced the role and movement of Indonesian women in the International Webinar entitled “The Role of Gender in Securing Families and Communities during Pandemic Era”. This webinar was divided into two sessions, presenting five speakers in the morning session, and a discussion forum with representatives of Faculties and Schools at Undip in the afternoon session.

The Head of the International Webinar Committee of DWP Undip in commemoration of National Mother’s Day 2021, Prof. Dr. Dra. Ari Pradhanawati, M.S. officially opened this event. She stated that the theme of this event was based on mother’s love which played a very important role in human life from childhood to adulthood. “We are born of love, love is our mother,” said Prof. Ari.

Prof. Dr. Widowati, S.Si., M.Sc. as the representative of the Chair of DWP Undip, Asih Budiastuti, S.H., CN, said that the majority of the Indonesian population are women, where they have several roles at once such as being employees at the office and being wives and mothers at home. The objectives of this webinar are, among others, to strengthen the role of women in the families and communities, to review the role of women during the pandemic era and the new normal era, as well as a forum for sharing ideas and strategies for survival.

Rector of Diponegoro University, Prof. Dr. Yos Johan Utama, S.H., M. Hum. expressed his gratitude because during this pandemic Undip was still able to hold events to commemorate National Mother’s Day, and expressed his gratitude to the speakers who attended and the participants who took part in this event. “The multitasking role of women is very important in all aspects. In this era of disruption, the mother’s role as the main manager of the family is very important. Thank you DWP Undip for bringing up this theme and I hope the participants gain useful insights,” said Prof. Yos in his short speech.

Indonesian Minister of Women’s Empowerment and Child Protection, I Gusti Ayu Bintang Darmawati said that the Ministry of Women’s Empowerment and Child Protection (Kemen PPPA) continues to support real efforts to empower women and gender equality towards an Advanced Indonesia. Women are not a complement to men so that women do not need to defeat their role in the public sphere because they have become mothers, where the obligation to take care of the family is a shared responsibility. The community must also support women to work and to be empowered to participate in realizing the welfare of the nation. “Women is the productivity carrier as the manager of the family. We support women to become more resilient, both in their careers and their roles in the family, especially regarding family empowerment and child protection,” said I Gusti Ayu.

The presentation was continued by the Deputy Chair of the MPR RI, Lestari Moerdijat, who explained that gender is often associated with being equal and similar to sex, even though basically both genders are equal because men and women are dialectical beings who do not need to prioritize sex differences. Pandemics and disruptions present a variety of uncertainties and have a severe impact on the economic and social fields, especially on women. Lestari emphasized that the role of women is not only limited to the private sphere (domestic tasks) and their security must be guaranteed because ironically, violence against women actually occurs in the private sphere.

Keynote speaker from the University of Waterloo, Canada, Prof. Prateep Nayak stated that the goals of the SDGs would not be achieved easily if the division of gender roles had not been implemented properly. In the V2V (Vulnerability to Viability) concept, a pandemic becomes a trigger of vulnerability in society, where an individual or a group will be affected, one of which also has an impact on gender differences. Comprehensive understanding, database development, and collaboration with the community, government, and non-governmental organizations need to be done to prevent gender role inequality.

With the theme “Quality of Indonesian Women’s Education”, Prof. Dr. Tri Retnaningsih Soeprobowati, MappSc explained the importance of formal and informal education for women to build self-respect and self-dignity. According to her, Indonesia has not yet achieved gender equality in the field of education, one of which is due to early marriage. Education is very important because women who receive adequate compulsory education tend not to marry early, have productive lives, have personal income to strengthen the economy, are able to make wise decisions for themselves, and prepare for the future of their family and children with adequate knowledge.

Furthermore, Rika Budi Antawati, S.H., MKn., M.M. reviewed the role of women which is increasing during the pandemic because they help to secure the family economy and act as teachers when children study from home. The increased role can also put pressure on women so that support is needed either individually or in an organizational forum.

This is in line with the goals of the DWP Undip which always supports its members moreover who are affected by the pandemic, increases the self-empowerment of its members, and realizes the welfare of members, families, and the surrounding community. In addition to this webinar, DWP Undip has carried out various activities in the economic, social, and cultural fields by cooperating with the community, especially women to be empowered and more productive.

With various reviews regarding the role of women, especially during the pandemic era, DWP Undip hoped that this activity can help Indonesia in realizing the 5th goal of the SDGs (Sustainable Development Goals), namely Enforce Gender Equality. A strong nation is a nation that has strong women and mothers. (Titis – Public Relations)