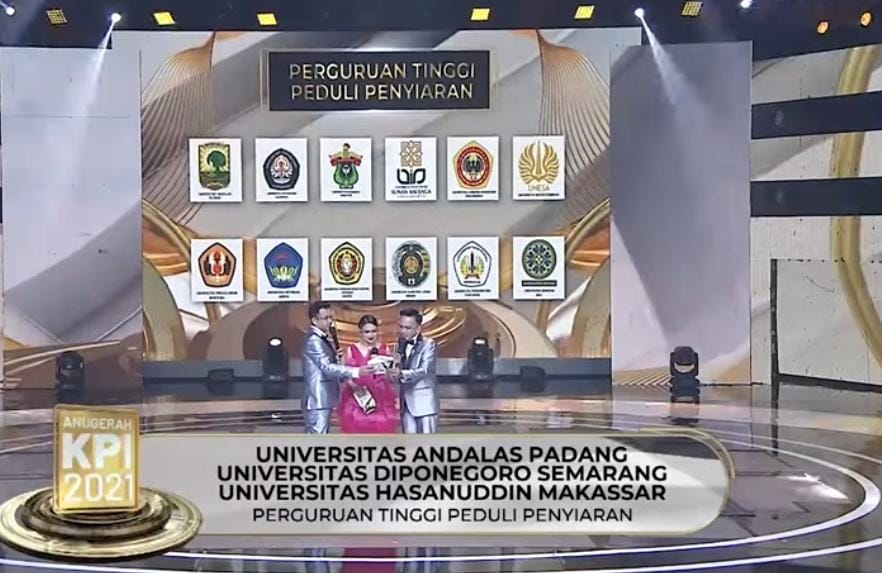 Semarang-Central Java (12/21). Diponegoro University (Undip) was nominated as one of 12 universities that won the Broadcasting Care College award. Appreciation was given by the Central Indonesian Broadcasting Commission (KPI) at the 2021 KPI Award which was broadcast on one of the national private television broadcasts on Friday (17/12).

Rector of Diponegoro University, Prof. Dr. Yos Johan Utama, SH., M. Hum. expressed his gratitude as Undip was selected as one of universities concerned with broadcasting.

“Currently Undip is strengthening its position to become a World Class University with most of its study programs are internationally accredited. However, Undip still pays attention to local values that are educational and inspiring to convey useful messages and information to the public,” said Prof. Yos.

Mulyo Hadi Purnomo, Deputy Chair of KPI, said that the 2021 KPI Award is a special achievement. Apart from having to prioritize the quality of broadcast, television and radio, KPI research not only provides an assessment of broadcast programs but also provides input on broadcast programs that are deemed necessary to make improvements. If there are more inputs and evaluations, it will certainly become the attention of KPI.

In line with Undip Rector, Head of the Undip Secretariat and Protocol, Dr. Agus Suherman, S.Pi., M.Sc., stated that Undip has many platforms and social media as well as the Undip TV Youtube Channel and Pro Alma radio station. “This supports the dissemination of information on various activities and performance achievements of Undip to be faster, easier to accept and provide benefits to the community,” he concluded.