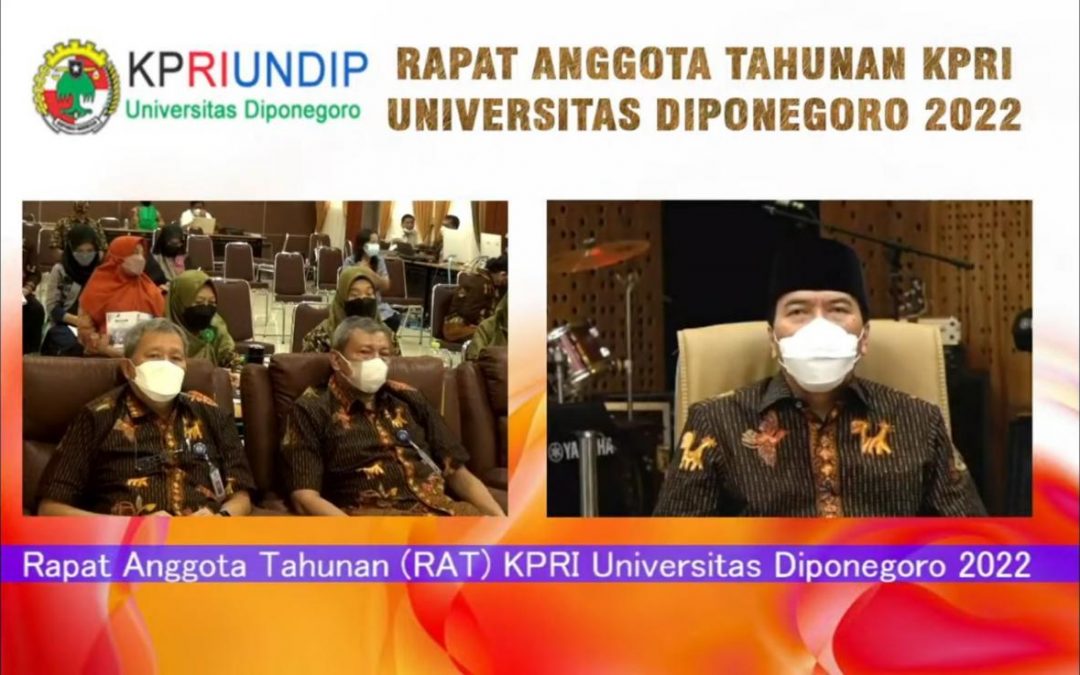 he Republic of Indonesia Employee Cooperative at Diponegoro University (KPRI UNDIP) has just held the 2021 Annual Membership Meeting (RAT), on Tuesday (22/02) at 09.00 AM by online via the Zoom meeting platform.

This year’s RAT was attended by the Undip Rector, Vice Rectors, Chair of KPRI Undip, the management and employees of KPRI Undip. This event also invited the Head of the Semarang City Cooperative and Micro Business Office, Drs. Agus Wuryanto, M.Sc., who was represented by the Head of Sub Coordinator for Institutional and Cooperative Examiner, Bejo Imam Suroso, S.E., M.M., and KPRI UNDIP Partners.

The RAT was officially opened by the Undip Rector as the KPRI Undip coach. The RAT was attended by a number of member representatives from the Faculties/Institutions/Units. RAT participants are members of KPRI Undip who are appointed by the Heads of the Faculties/Institutions/ Units to take part in the 2022 RAT closing the 2021 book. Approximately 800 invitees as representatives of all UNDIP KPRI members are present in this event.

In his speech, Undip Rector, Prof. Dr. Yos Johan Utama, S.H., M.Hum., expressed his pride in the presence of KPRI UNDIP. “One thing we should be grateful for is the existence of KPRI. How it has helped our members a lot, I felt it myself. It has easier access than others, so that we are given the opportunity to improve or buy something that we can’t buy at the moment but we can get it in installments, I’m really grateful for it,” he said.

“Alhamdulillah, now the patterns are gradually moving towards something more sharia. The access provided by KPRI UNDIP was very useful and it was implemented in the right way,” continued Prof. Yos.

In making the decision, Prof. Yos hoped that KPRI UNDIP will always prioritize deliberation and consensus. “Later, if a new board has been formed, if there are things that lack regulations, maybe there is a vacancy in regulations governing management, the first priority is based on deliberation and consensus, because that is the spirit that our parents taught in dealing with a problem,” he stated.

Furthermore, Prof. Yos advised that in the management of KPRI UNDIP there should be a regeneration of the management. “Give the younger generation a chance, put faith and trust in them. Insyaallah this baton will succeed and they have the nature of being responsible for all the trust that we give,” he explained..

Prof. Yos conveyed that the new management is expected to be able to gain knowledge from the old management who have laid down the basic values of a true and safe cooperative. “Learn from the old board, which I think is very good, laying the foundations of a proper and safe cooperative. Profits can still be obtained, where currently many companies are bankrupt, KPRI UNDIP has been given the pleasure and blessing of Allah SWT to be able to get benefits that are beneficial for all of us,” concluded Prof. Yos.

Meanwhile, the Head of the Semarang City Cooperatives and Micro Business Office, Drs. Agus Wuryanto, M.Sc., who was represented by the Head of Sub-Coordinator for Institutional and Cooperative Examiner, Bejo Imam Suroso, S.E., M.M., expressed his appreciation for this activity. “We, on behalf of the Semarang City Cooperative and Micro Business Office, give our highest appreciation to the management, supervisors, employees, and members of the KPRI UNDIP who are able to organize the RAT in a timely manner,” Bejo explained.

Bejo added that the Semarang City Cooperatives and Micro Business Office hoped that this RAT can be focused on reviewing and evaluating the responsibilities of the management in carrying out the activities contained in the work program as well as the cooperative’s income and expenditure budget plan that has been set in the RAT in the previous year.

“So it can really be known whether the management of the cooperative is in accordance with the correct and measurable criteria or not. It aims that the results of the study and evaluation can be used as a basis for compiling a work program and budget for the 2022 plan,” he added.

At this RAT, several prizes were also provided with the main prizes of 6 motorbikes and other prizes in the form of shopping vouchers.