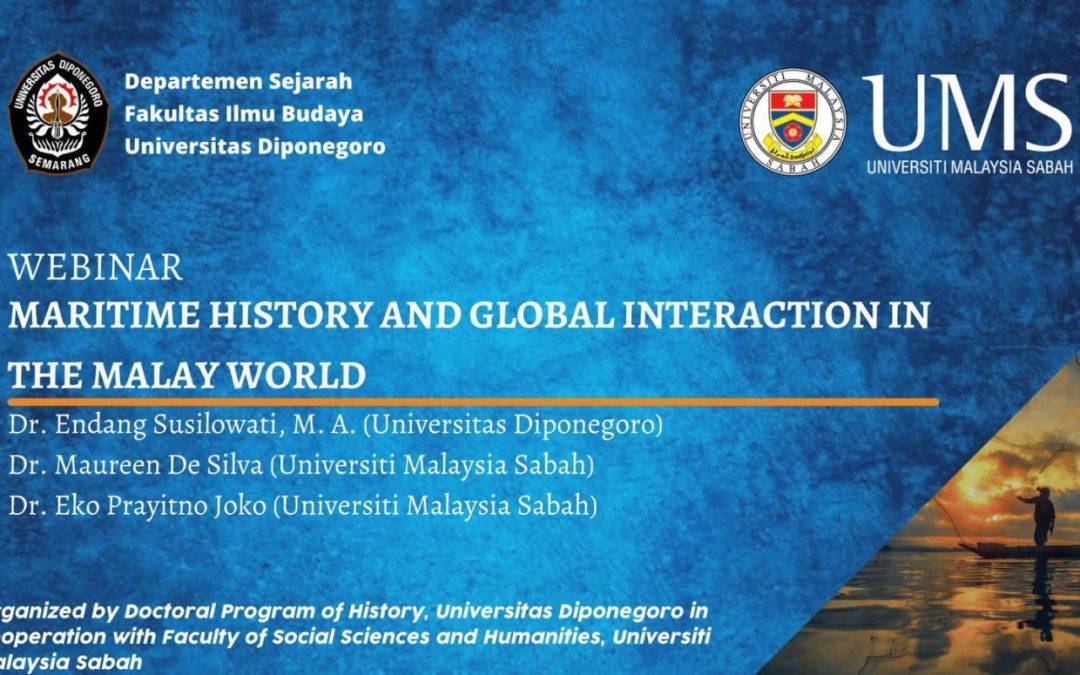 Prof. Dr. Singgih Tri Sulistiyono, M. Hum., as the Head of History Doctoral Study Program said that this webinar was an implementation of the points of cooperation as stated in the Letter of Intent (LoI), signed between the History Study Program, Faculty of Social Sciences and Humanities, Universiti Malaysia Sabah and the Department of History of the Faculty of Humanities, Diponegoro University on September 18, 2021. In addition to organizing cooperation in seminars, the cooperation between the two institutions is also carried out through joint publications, both articles in Sinta indexed national journals and reputable international journals as well as ISBN books, such as the book entitled “Laut dan Dinamika Masyarakat Nusantara” / Sea and the Dynamics of the Archipelago Society Volume I and Volume II. Furthermore, Prof. Singgih conveyed that the theme of maritime history and global interaction was deliberately raised to present a dynamic dialogue related to the development of interactions between humans and waters.

Webinar moderated by Dr. Dhanang Respati Puguh, M. Hum was very interesting and full of enthusiasm from the participants. It is nice to listen to the presentation from Dr. Maureen De Silva (Universiti Malaysia Sabah) about the early history of Indonesian labor migration to Sabah, especially in the 19th to 20th centuries. This migration has a strong relationship with dependence on human resources (HR), especially those from Central Java. Javanese labor was exported to Sumatra, Malay lands, Thailand, Queensland, as far as South America. Labor migration is not an unique incident but it has become an integral part of large-scale migration. The life of Javanese workers, of course, is full of sad stories, against the strict supervision of the colonial side, Javanese workers carried out various “hidden resistance” (as quoted from James Scott’s theory), such as going on strike, demonstrations, not coming to work, and even committing suicide.

The second speaker was Dr. Endang Susilowati, M.A. (Diponegoro University) who explained the existence of boat sailing during the Japanese occupation (1942-1945) and the Indonesian Independence Revolution (1945-1949). During the Japanese occupation, the existence of the people’s sailing ship which was often referred to as the “ant fleet” was colored by ups and downs. Shipping and inter-island trade, both by steamboat and sailboat, almost stopped. In fact, as many as 50 percent of the number of sailing ships that used to sail to Banjarmasin and Surabaya were declared missing (or deliberately sunk) by the Japanese army. Finally, the distribution of goods stagnated due to a shortage of fleets in inter-island shipping. Furthermore, during the Indonesian Independence Revolution, Dr. Endang explained that the Banjarmasin boat voyage was used to distribute weapons to the battlefield and serve the logistical needs of the guerrillas in various regions. Not only that, in order to break the Dutch blockade that restricted boat sailing activities, these boats also carried out illicit trade with Singapore.

The last speaker was Dr. Eko Prayitno Joko (Universiti Malaysia Sabah) who conveyed explanations about efforts to give new meaning to the colonialist perspective through oral history. It is important to reconstruct oral history, both in Indonesia and in Malaysia. Moreover, to deconstruct historical constructions made by colonial rule. It is undeniable that the colonial period has succeeded in mastering epistemological spaces through the colonial records produced. Thus, through oral history, democratization and historical reform are not only limited to the elite, but also to the public or ordinary people whose voices are not heard from any angle. (Fanada – History)