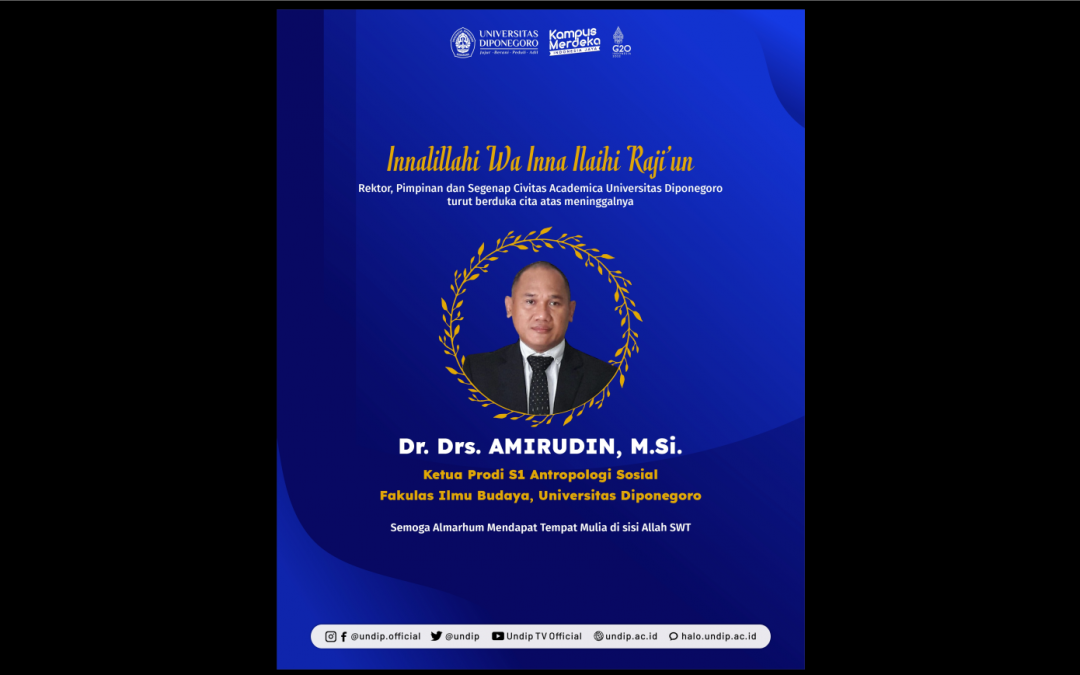 Diponegoro University mourned the loss of one of the best lecturers, Dr. Drs. Amirudin, M.Sc., who passed away on Saturday, March 12, 2021, at 04.00 AM due to illness. His body was buried in his hometown, Karanglewas Kidul Village, Purwokerto.

Undip Rector, Prof. Yos Johan Utama,. S.H., M.Hum., gave a speech while attending the funeral home at Villa Mutiara Tembalang. “Hopefully Dr. Amirudin is given a noble place by God Almighty and for the bereaved family is given patience and fortitude. God must have given the best, so as humans of course we must be sincere in letting go of the people we love. He is an example of uswatun hasanah, a friendly person who is never involved in conflicts and has high integrity. All the knowledge that has been given will be a never ending charity,” he said.

He also pioneered the establishment of the Social Anthropology Study Program. In a podcast with Undip TV Official which aired on June 28, 2021 he said that he would continue to help the scientific development of Undip Social Anthropology.

“The new study program of anthropology is a scientific discipline that studies humans and their culture scientifically. Initially the focus of the study was directed to cultural studies of coastal communities in accordance with the direction of the PIP (basic scientific pattern) or Undip’s center of excellence, namely coastal eco development. In addition, based on the market needs assessment of many institutions (public institution or private institution) there are requirements of analytical professionals, planners, researchers, academics, cultural journalists, as well as consultants and professionals in the creative and cultural industries. It is a consequence of the development of society from traditionalism to modernity or even post-modernity,” he said.

Indeed, this thought will continue to be a spirit to continue the struggle to develop science in the field of Anthropology, especially Social Anthropology. (Lin – Public Relations)