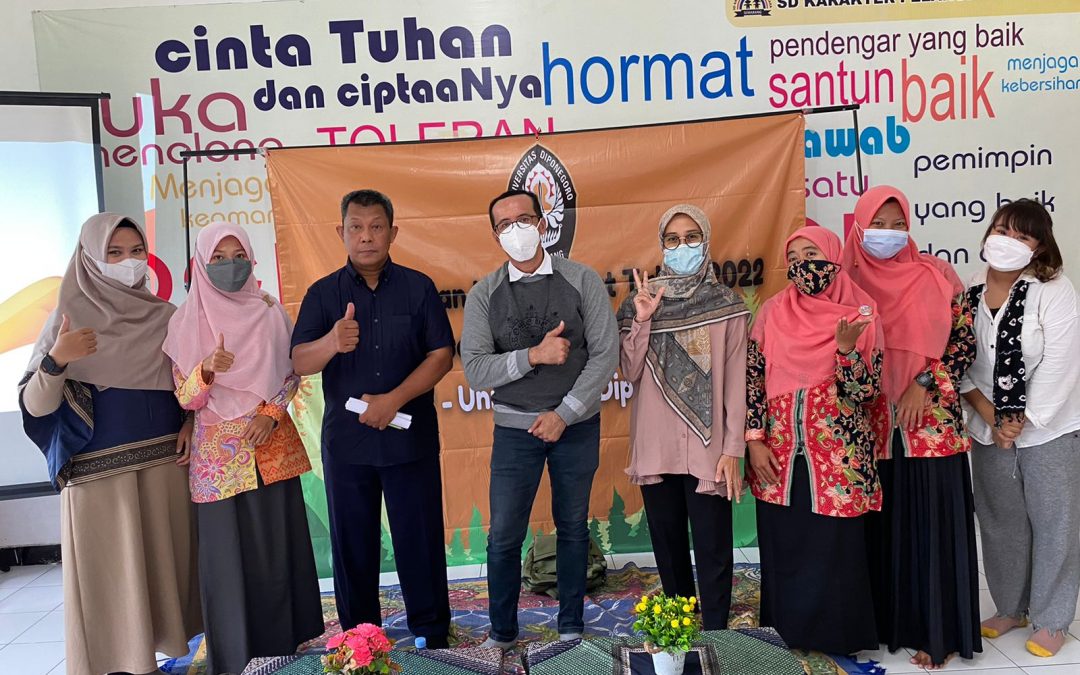 Nowadays the existence of digital content in various age groups is very massive. Children are one of the most vulnerable age groups exposed, one of the dangers is the rise of negative digital content. To prevent this, the Department of Communication Science of Faculty of Social and Political Sciences (FISIP), Diponegoro University (UNDIP) held a digital literacy action for parents of kindergarten students. The activity was held at the Karakter Pelangi Nusantara Kindergarten, Semarang, on Saturday (12/03).

The lecturer community service team led by Much. Yuliyanto, S.Sos., M.Si., raised the topic of Digital Literacy: “Parental Assistance in the Use of Social Media and Education related to Pornographic Content in Early Childhood”.

The Chairperson of the Karakter Pelangi Nusantara Kindergarten Foundation in Semarang, Sri Kusmiati, appreciated the initiative of the Department of Communication Science, FISIP, Diponegoro University, one of which was to educate parents regarding digital literacy, especially so that children avoid the bad influence of adult media content.

“Digital literacy is an important thing for parents to understand in educating their children, especially during their growth period,” said Sri Kusmiati.

In his presentation, Dr. Hedi Pudjo Santosa, said that the data about the number of children watching pornography is worrying us. “The research is conducted by a scientific institution that is quite credible and of course we are worried about it,” he explained.

The second speaker, Dr. Adi Nugroho, M.Si invited parents to provide communication media for children with continuous assistance. The assistance can be carried out in various activities even in physical activities, for example after playing in the yard or with friends, the children can use smartphones occasionally. However, assistance by adults is a must, as in television shows there are shows with the label BO or parental guidance. Media is unavoidable in the hands of students even at the age of kindergarten and pre-school, so use it wisely.

Dr. Adi appreciated when a parent said that there are conditions for his son when he wants to use his cellphone, namely at certain hours and after reading the Qur’an. This kind of patterned lifestyle can be created and be very varied depending on the situation of the parents and family, with the aim to minimize the bad impact of the media. However to prohibit it one hundred percent seems impossible, because there is also a positive side of the media.

The lectures and interactive discussions were closed by Agus Naryoso, S.Sos., M.Sc. Agus showed a lot of adult content that can still pop up in the children’s rooms. Television is also the same, at the prime time when children are still learning, adult programs that tend to be pornographic are shown in television. Agus invited parents to be role models to be healthy and wise in using cellphones. “Don’t prohibit children from using cellphones, but the parents themselves are busy scrolling through social media,” he said.

The digital literacy activity for parents this time was held online through the Zoom meeting and offline by presenting 20 parents. The presented invitees were interactive during the event which was held with implementing strict health protocols.

The digital literacy event at the Karakter Pelangi Nusantara Kindergarten involved D4 Information and Public Relations students, including Aulia Handayani, Kinan and Satria. They actively assisted the participants in this interactive activity. The number of participants of this event reached 55 people combined offline and online.

“Hopefully, by holding digital literacy socialization, parents can sort out good and bad information for their children,” explained Ayu, one of the lecturers who is also a Community Service Team member at FISIP UNDIP.