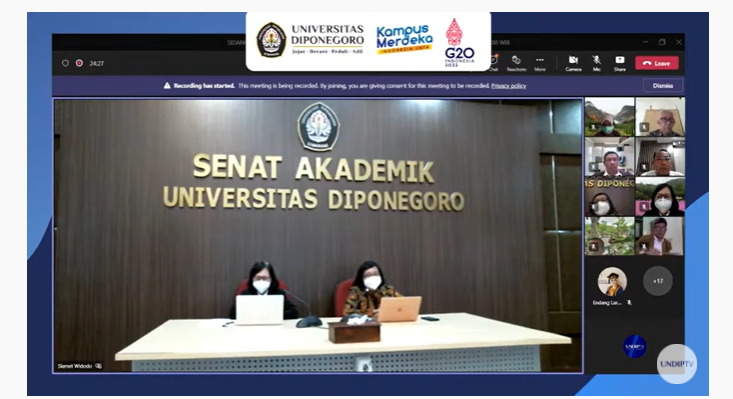 “Being a global maritime axis is a noble desire that has been proclaimed by the Indonesian government since 2014, at the beginning of the administration of President Joko Widodo and Vice President Jusuf Kalla. Indonesia already has the capital to become a strong maritime nation. The very strategic location between the Indian Ocean and the Pacific Ocean as well as between the Asian continent and the Australian continent, the vast sea area, abundant natural resources and human resources is a tremendous gift. This was conveyed by Dr. Endang Susilowati, M.A., Prospective Professor of Faculty of Humanities, Diponegoro University in the presentation of papers by Undip Professor Candidates organized by Undip Academy Senate, on Friday (18/3).

The requirements of a maritime country are strategic geographical location; topography of the ocean and land areas that lead to the characteristics of maritime resources and infrastructure; legal territorial area; number of people living throughout the archipelago; social aspects, including maritime traditions and culture, as well as government system that encourages the implementation of policies that lead to the marine sector. History has also taught that in the past, Nusantara, which most of its territory later became Indonesia, has become a very strong and respected maritime country in the world. The countries in the Nusantara used to rely on land potential (a variety of mainstay products and port infrastructure) combined with sea potential (shipping and trade system and a strong navy), supported by a maritime spirit that became the nation’s identity, successfully becoming the world’s maritime axis. Indonesia today should be able to continue what was achieved by the nation’s ancestors.

The government’s program to make Indonesia as the world’s maritime axis is basically the right program, because Indonesia already has basic capital such as a very strategic location, a vast water area, thousands of islands, abundant natural resources, as well as inter-island and international shipping lanes which are important infrastructure for the creation of connectivity between ethnic groups and between countries in the world.

“History has recorded that this country was once a great maritime country and was respected by other nations. In the territory of Indonesia, which was formerly known as Nusantara, there were once many great maritime kingdoms whose power was recognized to foreign regions. The kingdoms of Srivijaya and Majapahit have proven their control over the seas in all aspects, completed with a strong navy that created unshakable political, economic and cultural hegemony in the long term, and brought prosperity to the kingdom and its people. Nusantara as the ancestry of Indonesia has become the world’s maritime axis in its time,” she said.

“To build a great maritime nation and make it the world’s maritime axis, it is not enough just to exploit marine resources, but also to create and implement government policies in the maritime sector that are comprehensive, sustainable, and futuristic. Socialization and enculturation of maritime historical and cultural values through the media of education, art, literature, and so on are important so that the maritime spirit is re-embedded in the souls of the nation’s children. Moreover the spirit should be livened up by the leaders and policy makers so that ideals to become the world’s maritime axis can be realized at some point in the future,” concluded Dr. Endang. (Lin – Public Relations)