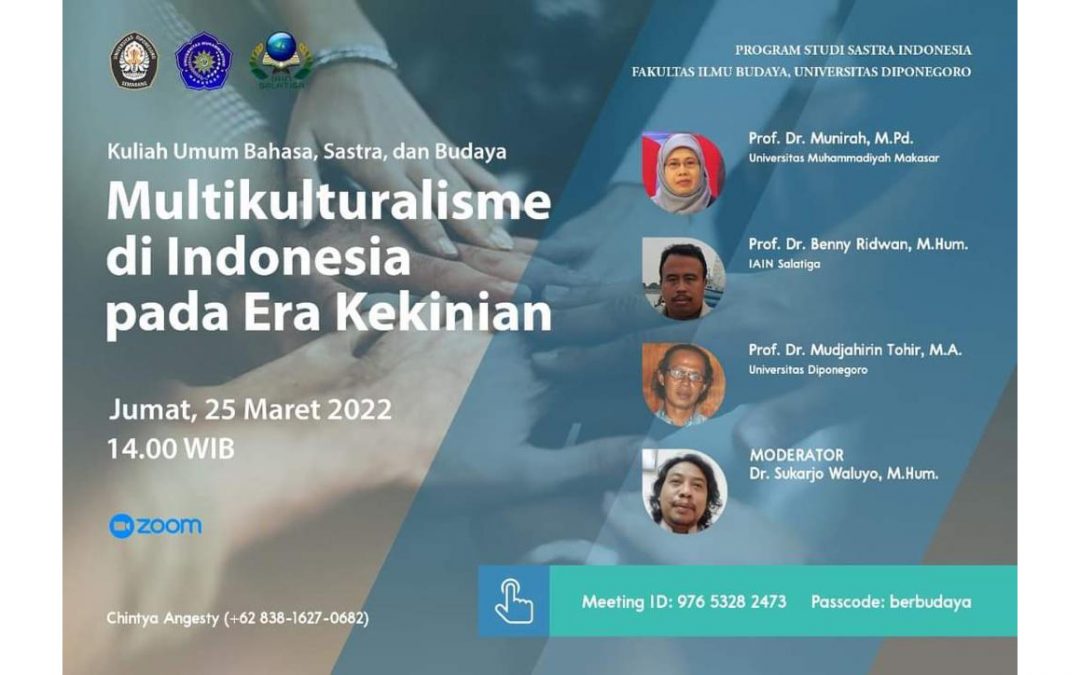 Friday (25/3) – Along with the rapid progress of the times, people are required to be more critical to balance the flow of globalization. Not only the progress of science and technology continues to move, socio-cultural problems also continue to develop following the changing times, especially in the era of the millennial generation. Responding to cultural issues that arise in society, the Indonesian Literature Study Program, Faculty of Humanities (FIB), Diponegoro University (Undip) held a Public Lecture on Language, Literature, and Culture with the theme “Multiculturalism in Indonesia in the Contemporary Era”, inviting three speakers who are experts humanities from various universities in Indonesia.

Officially opening this event, the Dean of FIB UNDIP, Dr. Nurhayati, M. Hum. conveyed that the topics raised in this public lecture were interesting topics especially for academics. “This theme is very relevant to the current situation, our task as social humanities academics is to solve social problems in multicultural Indonesia. Hopefully this public lecture can provide answers to these problems and add new insights for all of us,” said Dr. Nurhayati.

The first speaker, Prof. Dr. Munirah, M.Pd. from the University of Muhammadiyah Makassar, discussed “The Role of Multiculturalism in Indonesian Education in the Contemporary Era”. According to her, cultural diversity needs to be introduced to the millennial generation to form awareness of multiculturalism, one of which is through education. The culture of society that continues to move and change can be used as an object of study so that an educational reform movement occurs, for example through learning texts that introduce the characteristics of various ethnic groups and races in Indonesia. “Understanding multiculturalism fosters tolerance which is beneficial when individuals engage in social interactions. I really support the student exchange program held by the government, because from that program students can learn about Bhinneka (diversity),” said Prof. Munirah.

Furthermore, the second speaker, Prof. Dr. Benny Ridwan, M. Hum. from IAIN Salatiga explained “Multiculturalism in Indonesia in the Contemporary Era”. Prof. Benny said that multiculturalism represents a culture whose positive image must be formed, where in the process it is not enough just to live side by side, but must know and respect each other’s differences. Multiculturalism includes universal human values, so that Indonesia with a pluralistic society should not be separated because of the classification of social class, ethnicity, religion, race and class. “There are two challenges, namely globalism and fundamentalism. The importance of unity must be instilled, one of which is by respecting others,” said Prof. Benny.

While the third speaker, Prof. Dr. Muhadjirin Tohir, M.A. from Diponegoro University delivered material on “Multiculturalism in Indonesian Construction”. Multiculturalism in Indonesia shows the Bhinneka or diversity as the way of life based on Pancasila as the moral order. In anthropological construction, humans can live properly if their needs are met, including basic needs, social needs, and the needs of civilization.

Multiculturalism will be difficult to form in a society that is still poor and has difficulty even meeting their basic needs. Culture can be used as a reference source of truth, in constitutive way through fairy tales, mythology, religion; cognitively through local knowledge and scientific knowledge; in evaluative way in the form of a “magical” tradition; and expressively through ethical and aesthetic merit. “Things that are different from our beliefs do not mean they are wrong, for example, rain handlers can be categorized as local knowledge,” concluded Muhadjirin.

At the end of the event, the Head of the Undip Indonesian Literature Study Program, Dr. Sukarjo Waluyo, M. Hum. as the moderator concluded that culture has tangible and intangible aspects, so that understanding multiculturalism is a continuous process that continues to move following changing eras. (Titis – Public Relations)