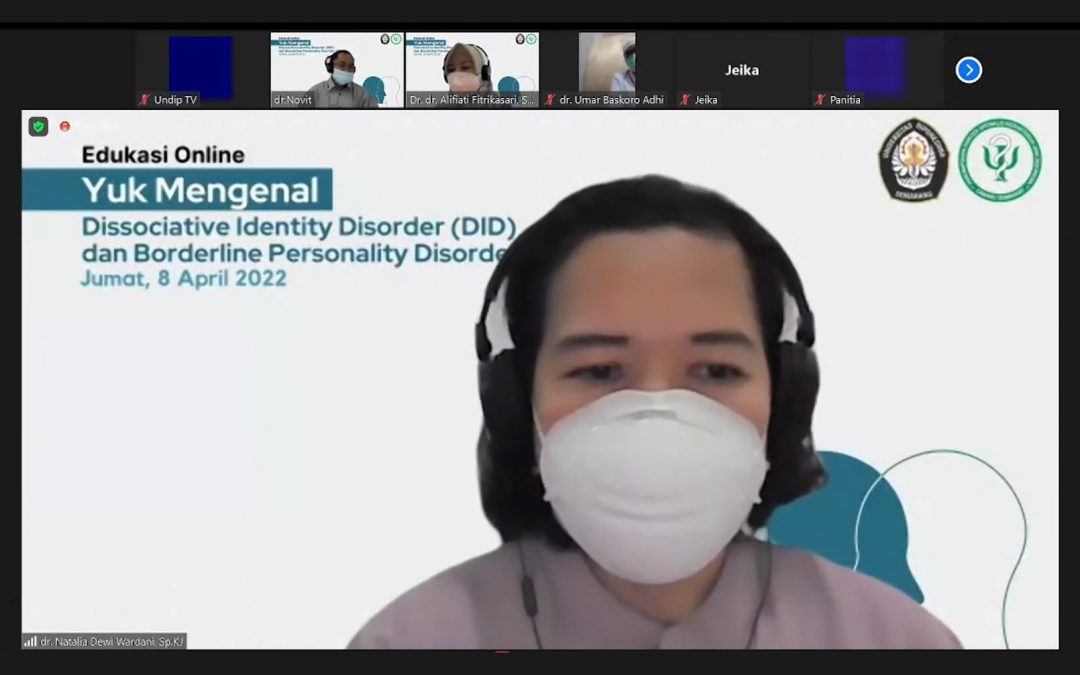 Dr. dr. Alifiati Fitrikasari, Sp.KJ(K)., explained Dissociative Identity Disorder (DID) as an identity disorder characterized by the presence of two or more different personality states with discontinuities in the sense of self and agency. It has many variations in affect, behavior, awareness, memory, perception, cognition, or sensory-motor function.

“So rarely in DID sufferers only appear 2 personalities, usually more than 2 personalities can appear. According to DSM-III (Diagnostic and Statistical Manual of Mental Disorders-III), DID is multiple personality disorder,” said dr. Alifiati.

Dissociative Identity Disorder (DID) is currently understood to be a chronic complex post-traumatic developmental disorder in which adverse experiences usually begin in early childhood. Dissociative identity results from the child’s inability to develop and maintain a sense of one’s self across different behavioral states.

dr. Alifiati added that the cause of Dissociative Identity Disorder (DID) comes from psychosocial and biological factors. Psychosocial factors include developmental trauma, social cognitive sequelae, trauma resulting in neurobiological responses. “While the biological factors here include an epigenetic mechanism, there is no direct evidence that DID is a biological genetic factor,” she said.

A diagnosis of Dissociative Identity Disorder (DID) is associated with exposure to extreme ambivalence and abuse in early childhood that is overcome by complex forms of denial that the child believes the event happened to someone else. “This occurs because it happened in the stage in a child’s life when an imaginary friend ‘exists’, so it was perceived as a ‘solution’ to severe trauma at that stage may form a separate identity,” said dr. Alifiati.

Severe child abuse and the absence of family and social support are one of the causes of the emergence of a Dissociative Identity Disorder (DID) diagnosis.

“Social and family factors also contribute to the emergence of DID. The tendency to segregate seems to be as closely related to pathogenic family structures and attachment disorders acquired early in a child’s life as it is to temperament or native genetics. The parenting style of DID is typically authoritarian and rigid, but paradoxically with the opposite of the parent-child relationship,” she explained.

“The prevalence is higher in adult psychiatric patients in outpatient and emergency department. A trauma in childhood can cause the occurrence of DID in adulthood,” continued dr. Alifiati.

Furthermore, dr. Alifiati explained that for the treatment of Dissociative Identity Disorder (DID), psychotherapy could be used. In psychotherapy there is a phasic model which consists of 3 stages. The first stage involves the patient to establish safety and stability. The second stage focuses on maintaining stability as well as exploring trauma narratives and resolving trauma-related emotions, beliefs, and behaviors. While the third stage of treatment emphasizes identity integration and living without dependence on dissociation.

Meanwhile, dr. Natalia Dewi Wardani, Sp.KJ., presented her material about Borderline Personality Disorder (BPD). Borderline Personality Disorder (BPD) is a mental health disorder that affects the way a person thinks and feels about themselves and others. This leads to functioning problems in everyday life, including self-image problems, difficulty managing emotions and behavior, and unstable relationship patterns.

“Borderline personality disorder usually begins in early adulthood. The condition appears to be worse in young adulthood and may gradually get better when the person gets older,” said dr. Natalia.

According to dr. Natalia, the causes of Borderline Personality Disorder (BPD) can be associated with environmental factors, genetic factors, and brain disorders. “In addition to environmental factors such as a history of child abuse or neglect, Borderline Personality Disorder may be linked to genetics because several studies of twins and families have shown that this disorder may be inherited. In addition there are factors due to brain abnormalities. Several studies have shown changes in certain brain areas in the regulation of emotion, impulsivity, and aggression. So people with borderline personality disorder have emotional instability,” she said.

dr. Natalia added that there are several risk factors for a person to get Borderline Personality Disorder (BPD), namely hereditary predisposition and a stressful childhood. “You may be at higher risk if a close relative has the same disorder,” she added.

“Borderline Personality Disorder can damage many areas of your life. This can bring a negative impact on intimate relationships, work, school, social activities, and self-image. A person with Borderline Personality Disorder can lose their job repeatedly, cannot complete their education, have conflicted relationships, get into legal trouble, injure themselves, behave violently, and attempt suicide,” said dr. Natalia.

Furthermore, dr. Natalia revealed Borderline Personality Disorder (BPD) can be treated using psychotherapy as well as medication. “Therapy can help you learn skills to manage your condition. With therapy, you can feel better about yourself and lead a more stable life. There is no specific medication for the treatment of borderline personality disorder, but certain medications can help with co-existing symptoms such as depression, impulsivity, aggression, or anxiety,” he concluded. (Dhany – Public Relations)