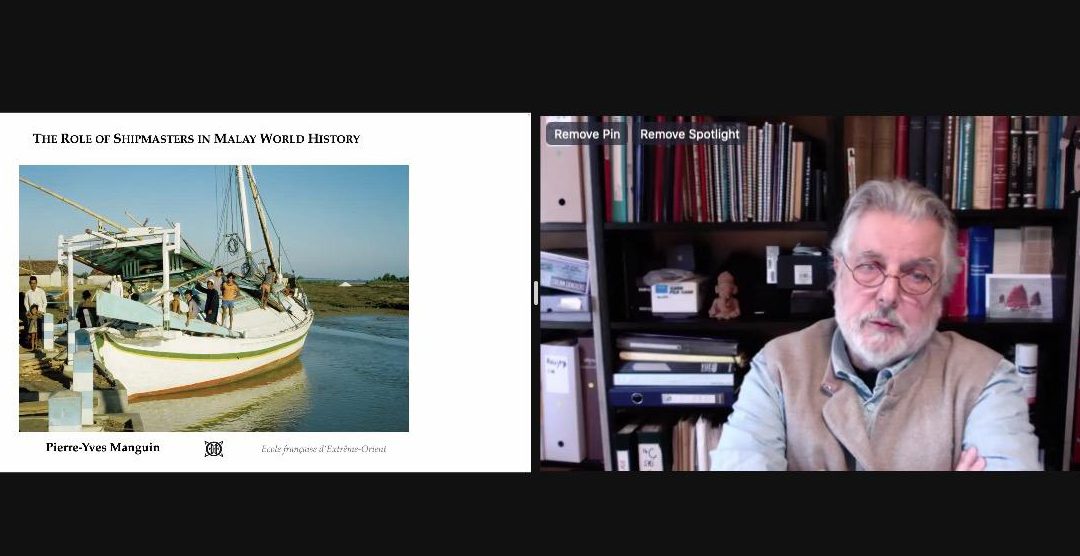 Master and Doctor of History FIB Undip – Semarang. Last week, the Master and Doctoral Programs in the History Department, Faculty of Humanities, Diponegoro University (Undip) held a Public Lecture with the topic “The Role of Ship Master in the Malay World History”. The discourse on the ship master is discussed dynamically and interestingly by maritime archaeologist, Emeritus Professor Pierre-Yves Manguin of the Ecole française d’Extrême-Orient (EFEO), Paris, France.

In the opening remarks, Prof. Dr. Singgih Tri Sulistiyono, M. Hum. conveyed that Prof. Pierre is a world-renowned maritime archaeologist. His research studies mostly about the China Sea in the Indian Ocean and the relationship between coastal communities and their environment. Since 1980, he has produced many academic works that focus on maritime archeology, one of the most famous of which is “Protohistoric and Early Historic Exchange in the Eastern Indian Ocean” published in 2017.

Prof. Pierre collected a lot of information related to ship masters from various inscriptions, including from Sanskrit, Old Malay, and Old Javanese in the 5th to 13th centuries AD, Sundanese literature in the 16th century, classical Malay literature in the 14th century to the 18th century AD, and spoken sources from various Austronesian languages. After 1000 AD, ship masters were quite prominent in Indian epigraphy with various terminology, such as nauvittaka and naukhuda. Both of these characters show high social standing.

The ship master, who is often mentioned in the ancient Javanese Kamlagyan inscription in 1037 AD by the name of Puhawang, has a high social position in coastal communities. They also act as brokers in trading (passeurs culturels).

It is narrated in many Indian epigraphies that the ship master became a prominent exponent of international shipping and trade activities. This figure does not only play a role in dealing with technical problems on the ship, but becomes an entrepreneur who is behind a long voyage. “Ship master is an investor who funds long voyages. Not infrequently, they trade commodities with high economic value. Even in Hikayat Banjar in the 18th century, it was stated that all captains were responsible for royal trade,” explained the professor who is majoring in engineering studies.

There is a story from Bujangga Manik related to an exploration with a ship master. A Bujangga Manik (Rakean Ameng Layar) is told to meet the ship master (Puhawang) on his way to Bali and from there will continue his journey to Bangka. He asked Puhawang’s permission to go with him on a trip to Bali. Puhawang then replied in a friendly tone, “If you want to cross the sea, don’t be anxious. Please come on board.”

The existence of ship master is very important, even in the book of shipping and trade law Amanna Gappa enshrined in palm leaves in the 17th century, precisely in 1676, it is explained that ship master is someone who has a boat, capital, sharp mind, is an experienced sailors, has strong authority over the crew and is able to sell the cargo carried on board.

Not only that, the Hikayat Hang Tuah written in the 17th century describes the city of Melaka which is filled with merchants, captains (ship masters) and rich people (notables).

There is even a growing myth about Dang Mpu Hawang, he is described as a king and ship master. Ship master is a local figure who is considered to have extraordinary “miracles”. Thanks to his magic, he managed to get a shipload full of valuable commodities. He ruled a land bustling with trading activity.

The event was moderated by doctoral candidates, Arido Laksono, M. Hum. This attracted a lot of attention from audiences from various universities both at home and abroad, included Mrs. Salina from the University of Malaya, who responded a lot to the role of ship masters in trade and shipping in Southeast Asia. In particular, the process of formation of coastal communities in Southeast Asia was also shaped by ship masters. They have a significant contribution in affirming the identity of coastal communities in global history. (Fanada Sholihah / History)