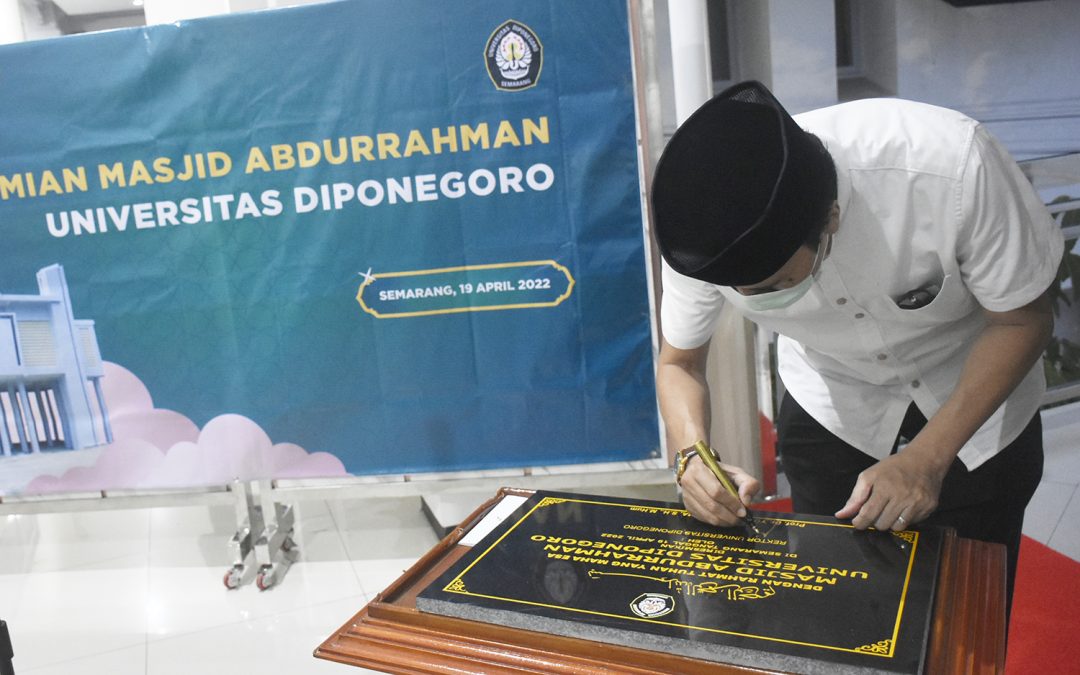 Rector of Diponegoro University (Undip), Prof. Dr. Yos Johan Utama, S.H., M.Hum., has just officially inaugurated the new building of the Abdurrahman Mosque which is located next to the Widya Puraya Rectorate Building, Undip Tembalang campus, on Tuesday (19/04) at 05:00 PM. The inauguration ceremony was attended by the Vice Rectors, Chair of Academic Senate, Chair of Board of Trustees, and Diponegoro University officials.

In his speech, Prof. Dr. Yos Johan Utama, S.H., M.Hum., revealed that the naming of the Abdurrahman Mosque was inspired by the figure of the Prophet and also the Hadith, that Allah SWT likes two names, namely Abdullah and Abdurrahman. “The name Abdurrahman reminds me of the Prophet Muhammad as a figure who is ‘abdan syakura, a person who is always grateful. Now we want to be loving people as well, Abdurrahman,” he said.

The presence of the Abdurrahman Mosque is expected to bring the spirit of compassion for others. “The spirit of loving others, Insyaallah will always bring Undip to the right track. Alhamdulillah, we feel that Undip’s development is always increasing. Therefore, the spirit of love underlies the construction of this mosque and hopefully it will be a blessing,” explained Prof. Yos.

“Let’s prosper this mosque. The prosperity of this mosque is when we do i’tikaf here and read the Qur’an. Hopefully this mosque will be a reminder that at any time we will be held accountable so we have to work as well as possible. Mlayu banter ning dunia yo oleh, tapi munggah banter ning dhuwur yo penting (to run fast in the world is good, but to rise to the eternity is better),” continued Prof. Yos.

Furthermore, Prof. Heru hoped that the presence of the Abdurrahman Mosque will bring Undip employees closer to Allah SWT and become individuals who match the name of the mosque. “Alhamdulillah, we have a mosque, one of the places where we can get closer to Allah SWT and hopefully that will give us blessings for all the activities. We are sure that our achievements can be accomplished since there is the help of Allah SWT. Hopefully we will become individuals who match the given mosque name,” said Prof. Heru.

The event continued with the symbolic handover of a grant from Prof. Dr. Yos Johan Utama, S.H., M. Hum. to Diponegoro University in the form of 10 large Qur’an, 10 Qur’an per Juz, 10 Qur’an reading tables, 10 sarongs, and 3 prayer chairs.