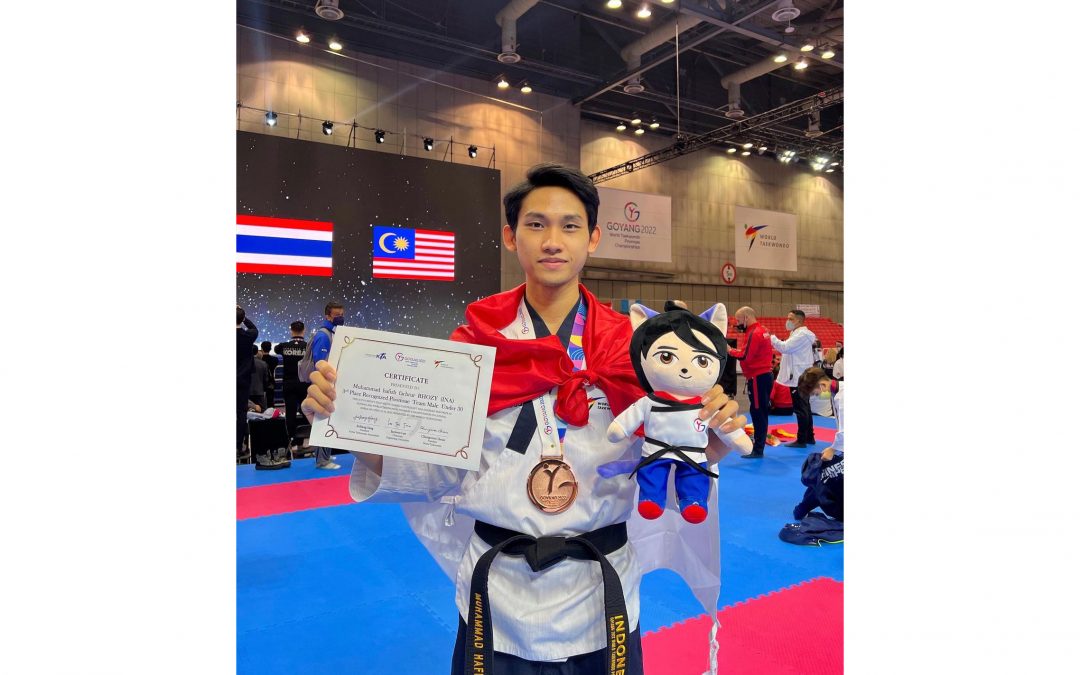 Diponegoro University (Undip) students have made another proud achievement at the international level. This time, a student majoring in Management, Faculty of Economics and Business (FEB) Undip Class of 2019, M. Hafizh successfully won a bronze medal at the GOYANG 2022 World Taekwondo Poomsae Championships which was held in South Korea, on April 21-24, 2022.

Hafizh’s achievement in winning a bronze medal is an extraordinary achievement, because 62 countries participated in the Taekwondo World Championship and each country has sent its best athletes. Competing in the Poomsae Recognize Men’s Team class, Hafizh along with other athletes from West Java, Muhammad Alfi and Muhammad Rizal, won a bronze medal after defeating athletes from the United States.

Hafizh was born in Yogyakarta on August 18, 2000. The athlete from Dojang Koguryo Manahan Solo previously strengthened the Porprov Solo and won a gold medal. At the 2016 PON event in Bandung, the student of FEB Undip managed to get a silver medal. The following are the last championships that Hafizh has participated in, including:

In addition, Hafizh has also been selected to participate in the SEA Games in Vietnam which will be held in May 2022. The achievements so far are the result of the training and hard work that Hafizh has gone through. “Actually, the main goal is the SEA Games next month, we are undergoing national training from last year and in that preparation we have participated in several championships for evaluation so that we are more stable in preparing for the big match,” said Hafizh when interviewed by Undip Public Relations team, on Tuesday (26/04).

“For fellow students, always be enthusiastic for what you are currently living, both inside and outside of academics. Manage your time well. When you are working on something, always do your best. Continue to self-evaluate, keep thinking positively, and I hope we can be successful in everything, whatever it is. Don’t forget to refresh your mind occasionally,” he concluded. (Dhany – Public Relations)