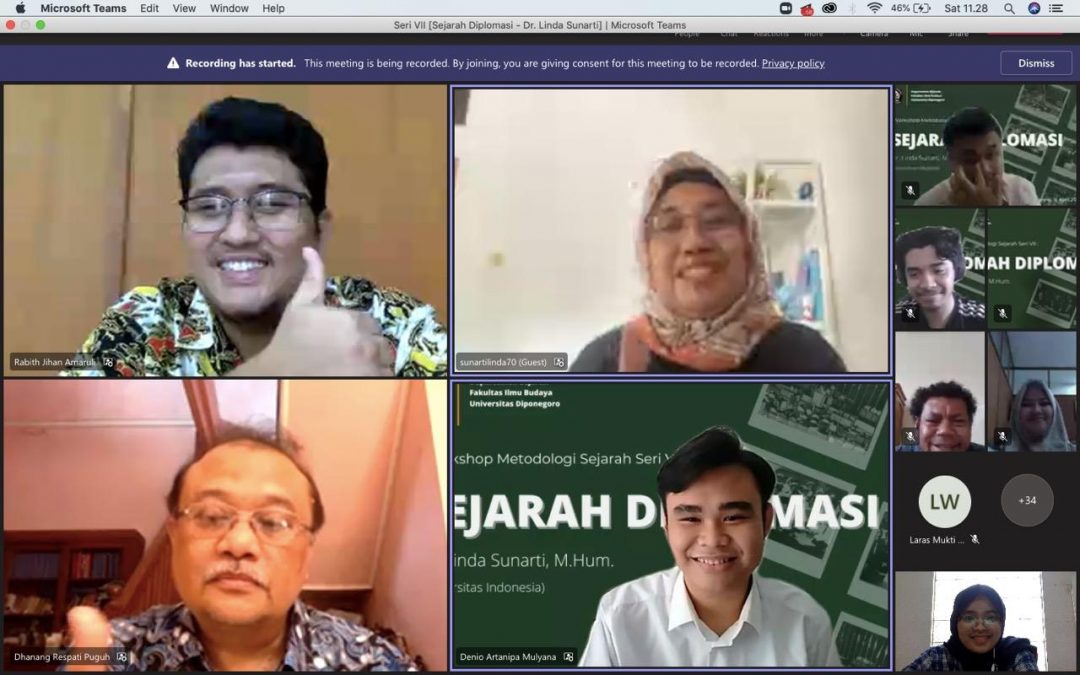 Rabith Jihan Amaruli, S. S., M. Hum., the moderator of the event, opened the discussion with a critical introduction to the history of diplomacy, a study that is currently finding its momentum. “Since the war broke out in Ukraine in March 2022, people have started to think, discuss, and present arguments, about the background of the current war between Russia and Ukraine,” explained the moderator who is currently pursuing a doctoral education.

Dr. Linda Sunarti, M. Hum., a lecturer of History Study Program, Faculty of Humanities, University of Indonesia also has a concern for Southeast Asian history, especially in the diplomatic aspect. The results of her thoughts have been published publicly, either in the form of books, articles, or proceedings, for example in a book entitled “Brotherhood for a Lifetime? : Looking for a Way to Peacefully Resolve the Indonesia-Malaysia Confrontation, 1963-1966” published by Serat Alam Media in 2014, and in an article entitled, “Preserving Javanese Identity and Cultural Heritage in Malaysia”, published in Cogent Arts & Humanities in 2021, and many other valuable works.

Dr. Linda provided valuable historical insight into diplomacy in ancient Hinduism. For example, in the Mahabharata epic, Krishna acts as a special representative of the Pandavas to negotiate and resolve problems peacefully with the Kauravas before the war breaks out.

Furthermore, Dr. Linda also explained the form of diplomacy which does not only revolve around the arena of soft diplomacy, but also hard diplomacy and even confrontational diplomacy in the form of threats is also part of a country’s diplomatic strategy.

Oftentimes, diplomacy is equated with foreign policy. Even though they both have common things, they do not mean the same thing. According to Roy (1991), foreign policy is the overall foreign relations of a country and the form of goals, as well as the latest interests in the formulation of a decision based on adjustments between national interests and the international situation that surrounds it. Meanwhile, diplomacy is part of the strategy to realize foreign policy, namely providing mechanisms and personnel for the implementation of a country’s foreign policy.