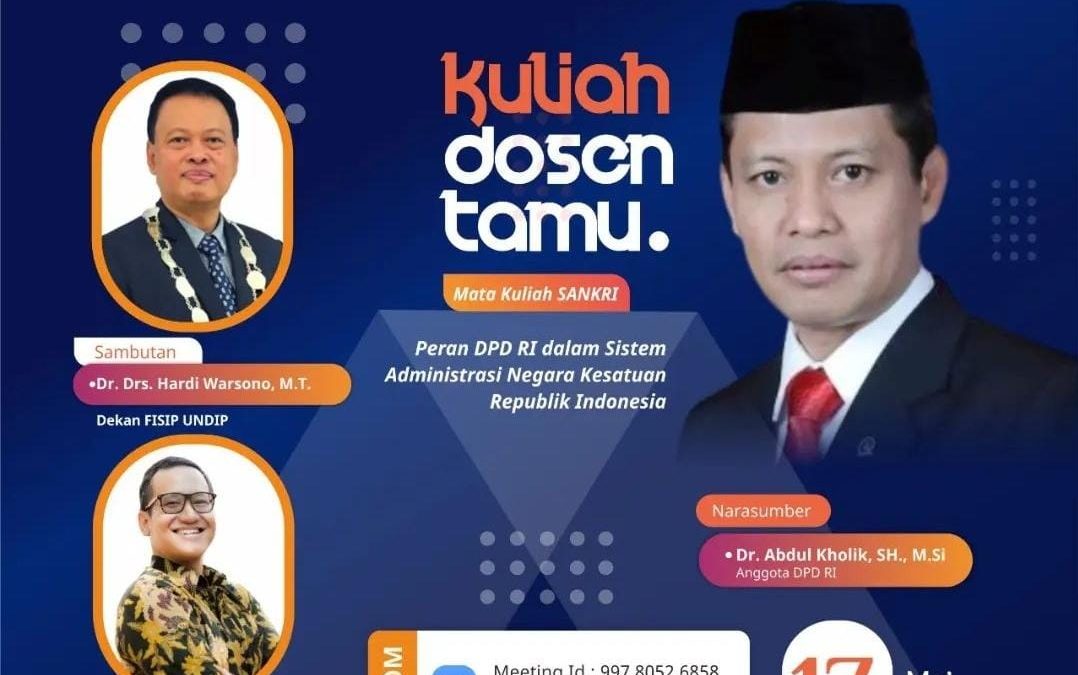 The Dean of the Faculty of Social and Political Sciences (FISIP), Diponegoro University (Undip), Dr. Drs. Hardi Warsono, M.T. welcomed the Guest Lecture event of the Undip Public Administration Undergraduate Study Program with the topic of “The Role of the DPD RI and the Administrative System of the Unitary State of the Republic of Indonesia” which presented Dr. Abdul Kholik, S.H., M.Si. (member of the DPD RI) and moderated by Amni Zarkasyi Rahman, S.A.P., M.Si. (Lecturer of the Department of Public Administration, FISIP Undip),on Tuesday (17/5).

On the occasion, Dr. Abdul Kholik said that parliament in a modern democracy is a showcase of a country, where strategic decisions of the country are discussed and decided, there are two mainstream systems, namely the Unicameral System (one chamber) and the Bicameral System (two chambers). The parliamentary system will have an impact on the implementation of the legislative function, namely in a one-room parliament system, the legislative process is completed in one institution. In a bicameral system, the legislative function will go through a two-chamber discussion (double checks legislation).

Furthermore, Dr. Abdul Kholik said the advantages of the bicameral system include having more complete representation on a population and regional basis, being able to prevent the emergence of tyrannical power, both majority and minority, and making important decisions of a country (legislation, budget, etc.) carefully and deeply.