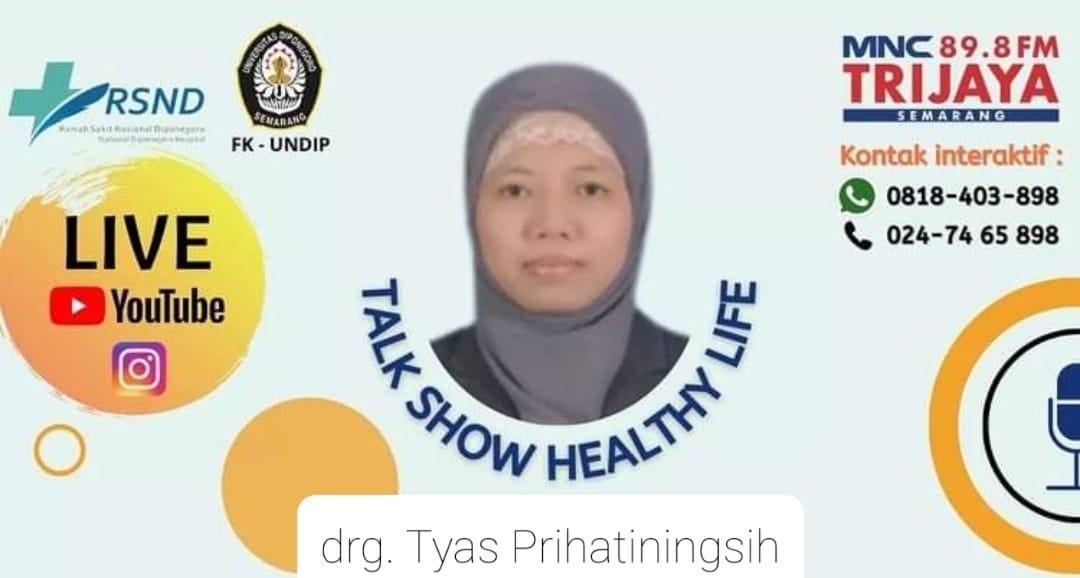 “The oral cavity is naturally a place to live for hundreds of species of germs, which under normal circumstances will maintain their balance as normal flora of the oral cavity. Some of the normal flora of the oral cavity bacteria will act as pioneer bacteria in forming dental plaque. Dental plaque will continue to form even after brushing your teeth. This occurs due to the presence of saliva or in our oral cavity. The protein or mucin components contained in saliva will form the first layer attached to the tooth surface and other surfaces where the layer is ideal for the pioneer bacteria to attach to dental plaque,” said drg. Tyas Prihatiningsih, M.D.Sc, Dentist of Diponegoro National Hospital (RSND), Diponegoro University (Undip).

Furthermore, she explained about the pioneer bacteria, it is from the Streptococcus group. Sp., these bacteria will cooperate with the other bacteria that can be harmful, for example, cariogenic bacteria or acid-producing bacteria that can cause caries or cavities. Other harmful bacteria that can be found in plaque include bacteria that cause damage to the supporting tissues of the teeth, for example P. gingivalis, P. intermedia, A. actinomicetemcomitans. In addition, the oral cavity can also receive additional germs from food and drink as well as bad habits in children such as thumb sucking, biting objects, and others. This can potentially increase the abnormalities that can appear in the oral cavity or abnormalities that cause entry through the mouth, such as herpes simplex infection, periapical abnormalities after root canal treatment and others.

“Oral cavity disorders such as caries, tartar and inflammation of supporting tissues such as gingivitis, and infections in other oral cavities can cause socialization disorders in the form of bad breath and aesthetic problems when abnormalities occur in the front teeth. Bad breath can arise from two factors, first from our oral cavity such as food scraps, smelly food, smoking, abnormalities in the oral cavity, dead tissue, caries, oral abscesses, tartar, inflammation of the supporting tissues of the teeth and candidiasis. While the second factor comes from systemic disease, for example in patients with diabetes mellitus and kidney failure. Aesthetic disorders can affect a person’s confidence when they talk and smile,” she explained.

According to drg. Tyas, to overcome these various problems, curative and preventive care efforts can be carried out. Abnormalities such as dental caries or cavities, gingivitis, and other oral tissue infections can be treated with curative treatments such as fillings, root canal scaling and curettage, while preventive measures include regular brushing of teeth at least twice a day at the right time in the morning after breakfast and night before going to bed, with a duration of at least 2 minutes, as well as the proper brushing method. Brushing teeth is the main method to control plaque build-up, whereas if there is still dirt that cannot be removed by brushing, dental floss or interdental brushing can help.

“The use of mouthwash after brushing is allowed on a limited basis under certain conditions and not for a long period of time, because it will interfere with the normal microflora of the oral cavity. The alcohol content in some mouthwashes can cause dry mouth, and this can result in impaired salivary secretion so that cleaning is reduced, and disrupt the balance of the oral microflora. Mouthwash is a chemical agent to prevent plaque formation, but it cannot clean plaque or tartar that has been formed previously, so the main preventive effort to maintain the cleanliness and health of our oral cavity is brushing our teeth,” she said.

Efforts to clean tartar cannot be done by brushing teeth because the dirt in the oral cavity has accumulated and mineralization. It becomes hard so it needs to be removed with an ultrasonic scaler. Tartar can reappear if during plaque control there is still residual dirt that persists, over time due to the presence of salivary electrolytes, mineralization occurs again into tartar.

Besides plaque control, we can get rid of bad breath by consuming foods that contain vitamins and fiber, not too much sugar and are not sticky. Chewing activity stimulates the muscles of the oral cavity to contract, this results in a squeezing effect on the salivary glands and secretion of saliva. The secreted saliva will have many functions, one of which is for self cleansing of the oral cavity. Bad breath due to systemic disease can be consulted with the doctor who treats the disorder so that the disorder can be controlled.

“The last prevention as an effort to maintain oral health is to have regular check-ups with the dentist at least twice a year, or less, according to the conditions of each individual,” said drg. Tyas. (Lin – Public Relations)