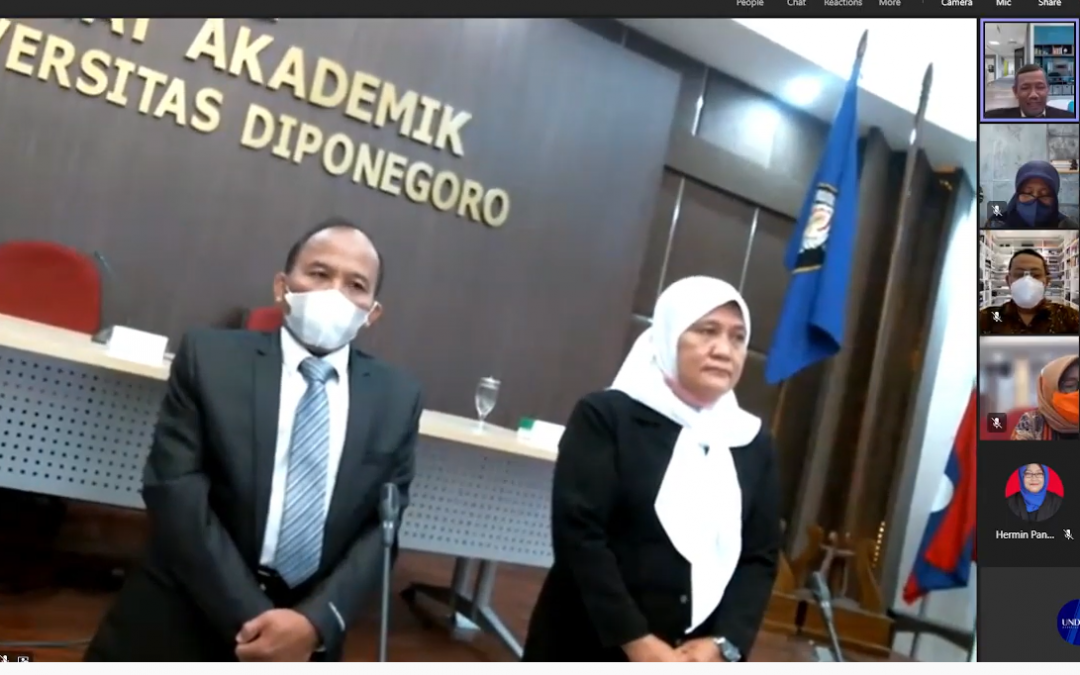 The Academic Senate (SA) of Diponegoro University (Undip) held a scientific presentation for Undip professor candidates, namely Drs. Gunawan, M.Si., Ph.D. and Dr. Erma Prihastanti, M.Si., on Monday (23/5). Both are lecturers from the Faculty of Science and Mathematics (FSM).

In his presentation, Drs. Gunawan, M.Si., Ph.D. delivered a scientific paper entitled “Potential of Copper-Based Semiconductors to Produce Hydrogen as Renewable Energy”. Energy needs according to the projections of the International Energy Agency (IEA), until 2030 world energy demand will increase by 45% with 80% of the demand supplied from fossil fuels. Whereas fossil energy cannot be renewed, it causes pollution and its reserves are running low. Thus it takes the development of sources of energy that is renewable and environmentally friendly. One of the renewable energy sources is hydrogen fuel from water which is free of carbon emissions and is easy to apply and prepare by photoelectrochemistry.

Efforts to improve the effectiveness of water breaking performance have been carried out with copper-based semiconductors in the form of CuO, Chalcopyrite and Cu-kesterite prepared by spin coating, spray pyrolysis and electrodeposition. In addition, surface modification with n-type buffer layer films in the form of CdS or InS2, cocatalyst Pt nanoparticles, and Ga doping have been shown to increase the onset potential and the resulting photocurrent.

“Research on copper-based semiconductors has been carried out for the photoelectrochemical splitting of water to produce hydrogen. The studied semiconductors were CuO, Cu-chalcopyrite and Cu-kesterite prepared by spin coating, spray pyrolysis and electrodeposition. Then it is coated with n-type in the form of CdS or InS2 and cocatalyst Pt nanoparticles. Several attempts have been made to increase the photo-onset and current potential, including variations in buffer layers, Ga doping and variations in catalysts,” he said.

“Based on these results, it proves that copper-based semiconductors have promising prospects in renewable energy, especially to produce hydrogen as an energy carrier. Efforts to improve photocathode stability need to be carried out for long-term use on dual absorbers without external electricity to develop the potential of copper-based semiconductors and contribute to the development of energy technology,” he continued.

In her opportunity, Dr. Erma Prihastanti, M.Si discussed “Physiological Studies and Determination of Plant Responses in Efforts to Mitigate Climate Change Impacts”. In general, physiological data analysis studies can be used in determining plant strategies in dealing with climate change. Plant physiology data such as root water potential can determine the water content of plants when planted in monoculture or polyculture manner. Hydraulic conductivity data and percentage of embolism can be used to analyze the water transport system in plants and how much damage caused by air bubbles that can disrupt the sustainability of plant life.

“Data on the content of proline and soluble carbohydrates in roots, and the results of observations using the in growth and soil core methods can be used to determine the resistance of plant root cells and their growth in conditions of water shortage. Determination of resorption in leaves is important to determine the pattern of nutrition/fertilization. Analysis of the development of plant adaptation can be observed from the specific leaf area or SLA as well as observations of leaf trichomes. Furthermore, physiological data is also very much needed in determining cultivation so that plant growth and production can be optimal and sustainable,” she said.  (Lin – Public Relations)