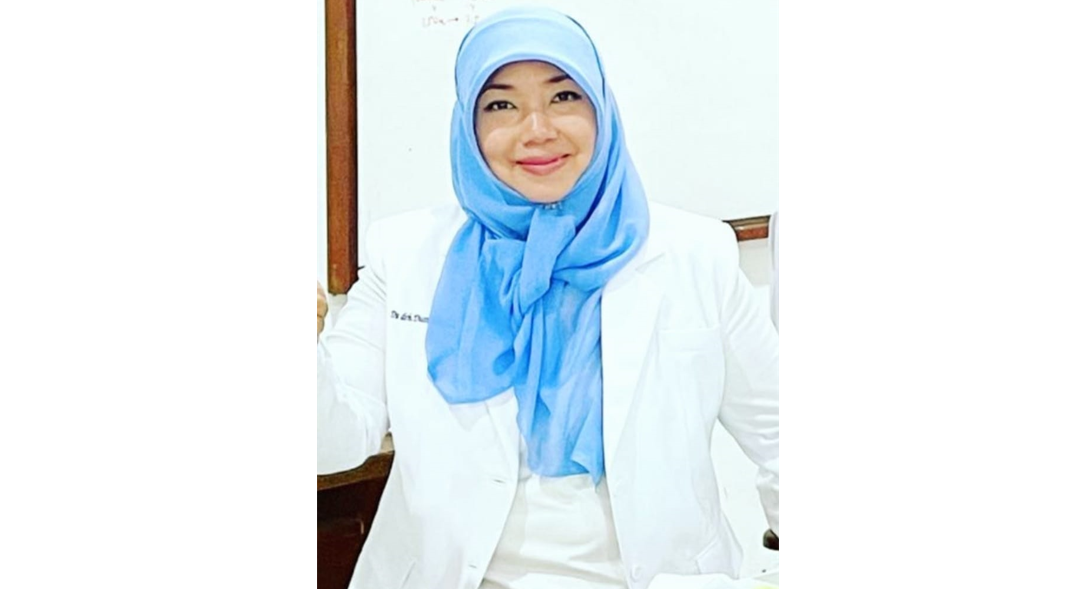 Foot and mouth disease is currently endemic in Indonesia. This disease attacks a lot of livestock, ranging from cows, buffaloes to sheep or goats and is classified as an acute disease that spreads through viral infections and is easily transmitted.

The Dean of the Faculty of Animal and Agricultural Sciences, Diponegoro University, Prof. Dr. Ir. Bambang WHEP, MS., M.agr formed the UNDIP FMD Controlling Task Force Team and appointed drh. Dian Wahyu Harjanti, Ph.D. as the coordinator. One of the main tasks of the PMK Task Force is to provide education on foot and mouth disease and outreach to the public that the disease is not transmitted to humans (not a zoonotic disease), and that meat and milk are safe for consumption. The education and outreach to the community is carried out through a virtual meeting forum with FPP Undip fostered farmers and the community, as well as through social media.

drh. Dian said that foot and mouth disease (FMD) is a viral infection disease (family Picornaviridae) which is acute and highly contagious in cloven-hoofed animals. Other names for this disease include aphthae epizootica (AE). FMD virus is small (± 20 millimicrons), does not have an envelope/without a layer of fat and has a strong capsid so that this virus is very resistant to disinfectants that work by dissolving fats. Based on the nature and structure of the virus, not all types of disinfectants are sensitive to this virus, where at this time the Indonesian Ministry of Agriculture in collaboration with the Indonesian Veterinary Association (PDHI) immediately released guidelines for preventing and handling FMD including the recommended types of disinfectants.

This FMD disease is not transmitted to humans or is not a zoonotic disease so that the current government’s focus is not to spread this disease between sensitive livestock and not to allow humans to become intermediaries or spreaders to sensitive animals. In humans alone, it does not cause disease, but the impact is on sensitive animals. Animals that are sensitive to FMD are cattle, buffalo, goats, sheep, deer, pigs, camels and several types of wild animals such as bison, antelope, giraffe and elephant. Foot and mouth disease (FMD) is the most important infectious animal disease and the most feared by all countries in the world. This disease can spread very quickly and can cross national borders so that it causes very high economic losses. Economic losses in the form of livestock deaths and high morbidity rates, trade barriers, disruption of the tourism industry, disease eradication operations, as well as disturbances to socio-cultural aspects and public unrest.

She said Indonesia had experienced several outbreaks of FMD, starting from the entry of FMD into Indonesia in 1887 in Malang, East Java which subsequently spread to various regions, until the last outbreak on the island of Java in 1983 which started in East Java. With various efforts to control and overcome FMD, finally Indonesia succeeded in declaring FMD-free status in 1986 through the Decree of the Minister of Agriculture No. 260/Kpts/TN.510/5/1986 and then getting world recognition for FMD-free status without vaccination as stated in the Organizational Resolution World Animal Health (OIE) Number XI of 1990.

There are 7 serotypes of FMD that have been identified, namely type Oise (O); Allemagne (A); German Strain (C); South African territories 1 (SAT 1); SAT 2; SAT 3; and Asia 1. Types O, A, C, SAT 1, SAT 2, SAT 3 and Asia 1 which are immunologically different from each other. The cause of the FMD outbreak in Indonesia in 1983 was only caused by one serotype, namely serotype O.

“This disease is characterized by the formation of vesicles or blisters and in the mouth, tongue, gums, nostrils, nipples, and in the skin around the nails, limping and even the nails can fall off, hypersalivation, animals lie down more often; in beef cattle there is a decrease in body weight and in dairy cattle there is a drastic decrease in milk production. Morbidity is usually high, reaching 100%, but the mortality rate for adult animals is usually very low, but in young animals it can reach 50%. In calves, with post mortem examination, changes in the heart muscle (myocardium) can be found in the form of striped, white, gray or yellowish stripes which are often referred to as tiger heart. Pathological examination is only important to make a differential diagnosis for diseases other than FMD,” she said.

She further said that animals infected with FMD can excrete the virus in exfoliated vesicle fluid, respiratory air, saliva, milk, semen, feces and urine. Infected animals that are still in preclinical status, that is, have not shown clear clinical symptoms, can actually excrete the virus. This fact is very dangerous considering that there is a possibility that animals that have not shown clinical symptoms are sold or slaughtered so that they have the potential to spread disease to other sensitive animals. The incubation period is influenced by the strain of FMD virus, the number of viruses and the route of infection. For natural infections in large numbers, the incubation period ranges from 2-3 days, but if the numbers are small, the incubation can reach 10-14 days.

Sensitive animals can be infected through inhalation (air/breathing), ingestion (through feed/drinking), mating (natural or artificial), and contact/touch. The spread of disease between areas is often caused by the traffic of infected animals, vehicles, equipment, people and animal products contaminated with the FMD virus. Dogs, cats, rodents, poultry, and other types of birds are not included in animals that are sensitive to the FMD virus, but can transmit FMD to sensitive animals mechanically, namely by transferring contaminants. Disposal of waste from infected areas, for example through waterways/sewers/rivers can pollute the environment and can become a source of contamination for vehicles, animals and grass. Based on the literature, the spread of FMD virus can reach 10 km, which is influenced by air circulation.

This disease is not transmitted to humans (not a zoonotic disease), so meat and milk are safe for consumption. Besides that, Indonesian culture consumes cooked meat through the process of heating until the center of the meat reaches 70°C for 30 minutes so that the FMD virus will die. In addition, after the cattle are slaughtered, a natural process of rigor mortis occurs which causes the pH of the meat to drop below 5.9. Based on research, the number of pH of 5.9 means that the FMD virus is inactive. Meanwhile, for milk, efforts to guarantee safety are carried out at least by pasteurization at 72°C for 15 seconds.

“Not all cows slaughtered for their organs can be consumed. There are also infected cows that do not show clinical symptoms or the medical language is ‘sub-clinical’ or maybe it has not yet arrived at its onset. As we know the onset can be up to 14 days. If the cow has been slaughtered, the organs in the cow’s body, especially the bone marrow and bones, head, lymph nodes and viscera must be separated from the meat and handled properly because they can contain viruses. The recommended treatment is boiling them for at least 30 seconds. So boneless meat can be said to be relatively safe because according to the guidelines from the OIE / World Organization for Animal Health) that the safest part is boneless meat and without lymph nodes,” explained drh. Dian.

She said the government had released a circular and guidelines for the implementation of the sacrifice on Eid al-Adha. The sacrificial committee must know the area of origin of the sacrificial livestock. They have to make sure the origin of the sacrificial animal is not from an outbreak area. Slaughter should be carried out at the Government’s Slaughterhouse (RPH) which is supervised by a veterinarian. What we fear is not the meat nor the people who slaughter and handle the meat, but the remnants of blood and other materials that enter the sewers and streams of water. If the contaminated water is drunk by sensitive livestock, it can cause a tremendous spread of FMD disease. At the Government’s Slaughterhouse, the Veterinarian or Veterinary Paramedic will conduct an ante-mortem examination (examination before slaughter), and must know where the animal came from (Outbreak/Threatened/Free Area). In slaughtering activities, animals from free areas are slaughtered first.

Livestock originating from outbreak areas and threatened areas must be separated and placed in isolation cages, even though they appear healthy. In the isolation area, the veterinarian will conduct an individual examination. If it is declared healthy, it may be slaughtered after a post-mortem examination conducted by a veterinarian.

If the health examination results are positive for FMD, then what must be done is to keep the livestock separated in an isolation cage and get treated. It should not be slaughtered anywhere because it can be a source of environmental pollution and transmission media for the FMD virus through blood, urine, feces and organs containing the virus.

“So this is not because we are afraid that humans will be infected. We are afraid that bones, heads, offal, feces, urine, blood and others will become a source of pollution that infects sensitive animals or livestock in their environment. The preventive and protective efforts are carried out for the benefit of livestock which is our source of animal protein food,” she said.

drh. Dian advised that if people buy meat from the market, instead of washing before cooking, it is better to cook the meat immediately until it boils for at least 30 minutes. Thus the surface of the meat which is contaminated with viruses will not contaminate the water flow from washing the meat which can later infect sensitive animals in our environment.

Storage of meat in the refrigerator is very good because it is the same as the process of withering. However, if you want to store it in the freezer, boil it first and then freeze it. If you want to store raw meat in frozen form, then before freezing it should be put in the refrigerator for 24 hours. This process is the same as the withering process carried out in developed countries in controlling FMD.

“When we store it in the refrigerator for 24 hours, it means that the meat has gone through the rigor mortis process where the pH drops below 5.9 and can inactivate the virus. After being stored for 24 hours in the refrigerator, then it can be frozen or cooked. Once again, the efforts we are doing are for the sensitive animals in our environment. Where most of these sensitive animals are livestock, sources of animal protein or meat and milk which we need to support the health and immunity of the human body, and play a role in the growth and development of the intelligence of Indonesia’s young generation,” she concluded. (Lin – Public Relations)