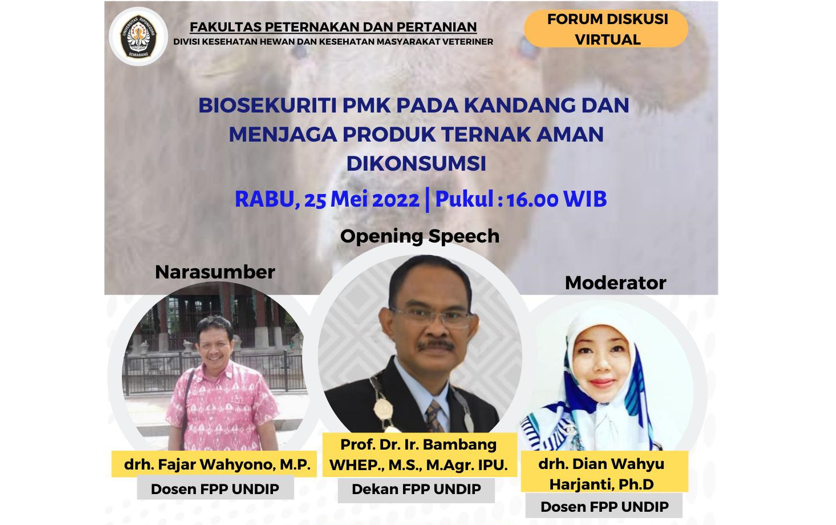 “The Faculty of Animal and Agricultural Sciences, Diponegoro University, through this talk show will share experiences about Foot and Mouth Diseases with experts. Of course the hope is that livestock can be handled properly and we know how to keep livestock products safe for consumption. Hopefully this event will be beneficial for all of us and FMD will soon disappear from Indonesia,” said Prof. Dr. Ir. Bambang WHEP., M.S., M.Agr. IPU as the Dean of FPP Undip in the Talk Show on FMD Biosecurity, on Wednesday (25/5).

In the material, drh. Fajar conveyed that FMD is a threat to the continuity of livestock cultivation because the morbidity can be up to 100%, the mortality is 1-5%, the productivity level is greatly decreased, the circulation of livestock and livestock products is hampered, and there is no medicine to kill the cause of the disease, depending on the process of forming immunity. Characteristics that cause disease caused by viruses, GENE: Apthorius and Fam: Picornaviridae, 7 Type: A; O; C; SAT1; SAT2; SAT2; Asia 1, non-zoonotic, not resistant to acid pH and very resistant to certain disinfectants.

Vulnerable animals are ruminants and pigs. Cattle show the most obvious symptoms pathologically. Buffalo, goat/sheep and pigs are of low severity, but can be carriers. Direct transmission can be from nose discharge, droplets, skin sores, meanwhile indirect contact can be through humans, clothing or equipment, vehicles, excreta (saliva, faeces, and urine), secretions (milk and meat), wind, mechanically by non-susceptible animals (birds and arthropods). The incubation period is 2-7 days, symptom period is 7- 12 days, and the recovery period is 12-20 days.

“Symptoms of the disease in cattle are fever up to 41 C degrees, cattles refusing to eat, less active, decreasing milk production in dairy cows, vesicles begin to appear on the lips, tongue and snout, vesicles begin to burst into blisters, vesicles causes pain after 24 hours so a lot of saliva comes out. Inflammation appears on the surface of the skin above the hoof and between the two tracks, with the symptoms include pain begins to appear in the legs, then the feet are kicked, over time the legs limp and if the wound hits all four legs, the cow is unable to stand, and if an open wound is not given antiseptic, then there is a secondary infection that hinders healing,” he explained.

“Due to complications of the disease, the vesicular wound becomes deeper, wider and even becomes fester. Wounds on the surface of the body such as the muzzle, feet and udder become more severe, if the wound on the hoof is getting worse, it can cause ripped nail. Miscarriage can occur in pregnant cows due to high body heat for a long time so that breathing becomes disturbed or short of breath. Death is very vulnerable in calves due to inflammation of the heart muscle, and according to forced slaughter regulations,” continued drh. Fajar.

According to him, the effect of disease on production is that milk production drops drastically from the second day, and there can even be a permanent decline; weight gain decreases; decreased productivity due to abortion; conditional slaughter; the number of livestock ownership decreased due to fear of farmers to maintain because of the risks; negative image of livestock products due to FMD which directly affects prices and decreases consumer prices.

Meanwhile, FMD biosecurity measures in cages include establishing a FMD prevention task force in a limited livestock environment (village level/livestock group), at least from the current conditions in an environment that is still free from FMD virus contamination until vaccination is carried out. The step is to make a collective agreement that must be obeyed by all cattle farmers in a limited environment, for example, it is prohibited to bring in new livestock, do not take feed from areas where cases are suspected to have occurred, report to the task force if the livestock shows symptoms of illness, are prohibited from collecting livestock even though the livestock are in one RT/RW. Farmers are also temporarily prohibited from visiting other farms, if they want to sell livestock, they must report to the task force and the transportation to bring them must be clean and has been disinfected.

Meanwhile, sanitation or disinfection measures in cages include improving sanitation in the cage environment by cleaning feces and feed residue more often, waterways, and grass; disinfecting cage equipment and the environment at least once a day; vehicles that go in and out of the cage are always disinfected after leaving the cage; fumigation of feed or feed ingredients after arriving and entering the cage; disinfecting milking equipment and milk carriers after use; make it a habit to disinfect clothes and shoes of employees who will enter the cage; limiting the proximity of visitors to livestock and carrying out disinfection before entering the cages area. (Lin – Public Relations)