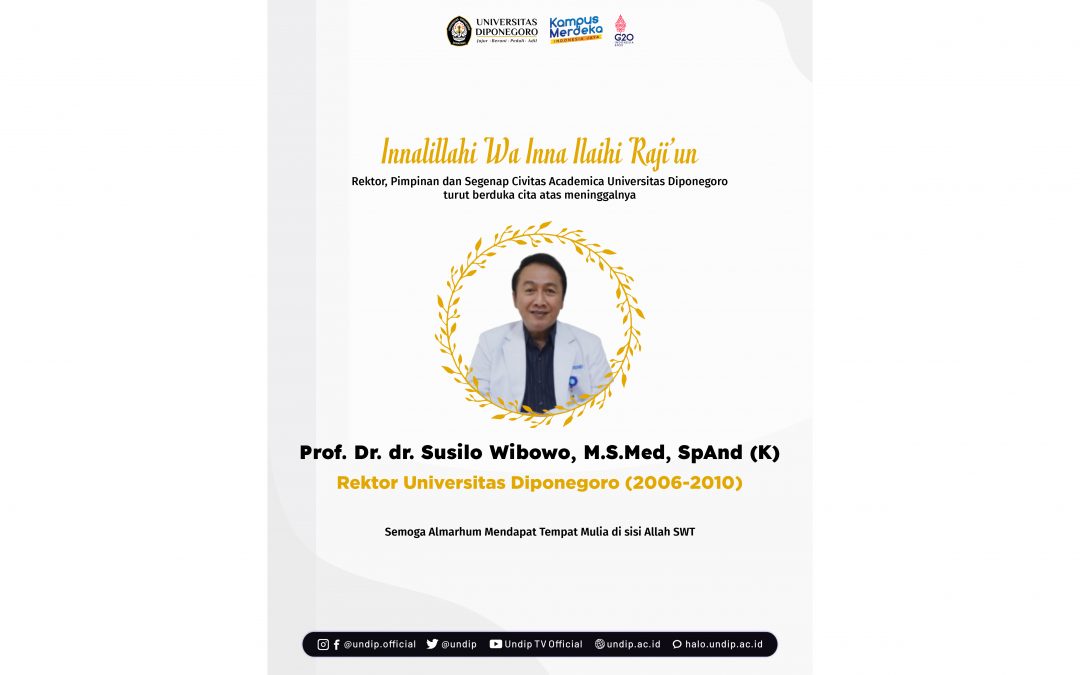 Innalillahi wa innailaihi rooji’uun, Diponegoro University (Undip) is grieving for the passing of Prof. Dr. dr. Susilo Wibowo, M.S.Med, Sp.And(K) to Rahmatullaah due to illness, on Friday May 27, 2022 at 10.13 AM. He is one of the professors in the field of Medicine-Andrology who has greatly contributed to Undip, has held an honorable position as Undip Rector (2006-2010) and was trusted to serve as the First President Director of the Diponegoro National Hospital (RSND) for the 2010-2019 period.

The late Prof. Dr. dr. Susilo Wibowo, M.S.Med, Sp.And(K) was taken to the Undip Imam Bardjo Auditorium at 02.00 PM. Then the academic community held a prayer session at Undip Campus Mosque and continued with the funeral at the Undip Tembalang Cemetery. In his speech, Prof. Dr. Yos Yohan Utama, S.H., M.Hum. as the inspector for the funeral ceremony, expressed his deepest condolences to the family of the deceased for the death of Prof. Dr. dr. Susilo Wibowo, M.S.Med, Sp.And(K).

“Allah has chosen the best day, Friday (Sayyidul Ayyam), a day that is highly glorified by Muslims. Insyaallah, this cannot be separated from his services during his life. He is the one who developed Diponegoro University very significantly and we are witnesses together that what he has done is really very beneficial for all of us. The buildings of the Faculty of Humanities, the Faculty of Social and Political Sciences, the Faculty of Law, RSND, and many other buildings were built with his efforts at that time, even in collaboration with the IDB and then implemented very well so now we are able to use them together. Many of his programs have brought Undip to the next level, nationally and internationally,” he said.

Prof. Dr. Yos Yohan Utama, S.H., M.Hum confirmed that the late Prof. Dr. dr. Susilo Wibowo, M.S.Med, Sp.And(K) has given us an example of kindness (uswatun hasanah). “Many good deeds have been done by him, one thing that I remember about him is the one that pushed us to pursue for the best. His words still feel true and I pass it on to the next generation, the sentence he always said, you should shoot the highest star because if you missed you would land on the middle star, don’t just shoot the moon because if you missed you shoot nothing. That is the driving force of Diponegoro University, which is now properly moved and imbued with his patriotic spirit, so that we have now reached the peaks of rank that cannot be separated from the enthusiasm and efforts given by him,” said Prof. Yos.

“As a teacher, Prof. Dr. dr. Susilo Wibowo, M.S.Med, Sp.And(K) has produced a hundred, maybe thousands of students who are currently practicing what he teaches. Insyaallah, as promised in our religion, that charity in the form of useful knowledge, the reward will flow continuously even though he has died. All his goodness, efforts, and dedication to his family, Diponegoro University, the Indonesian nation and even mankind will deliver him to Jannah Allah Subhanahu Wa Ta’ala, Amen,” he added. (Diah – Public Relations)