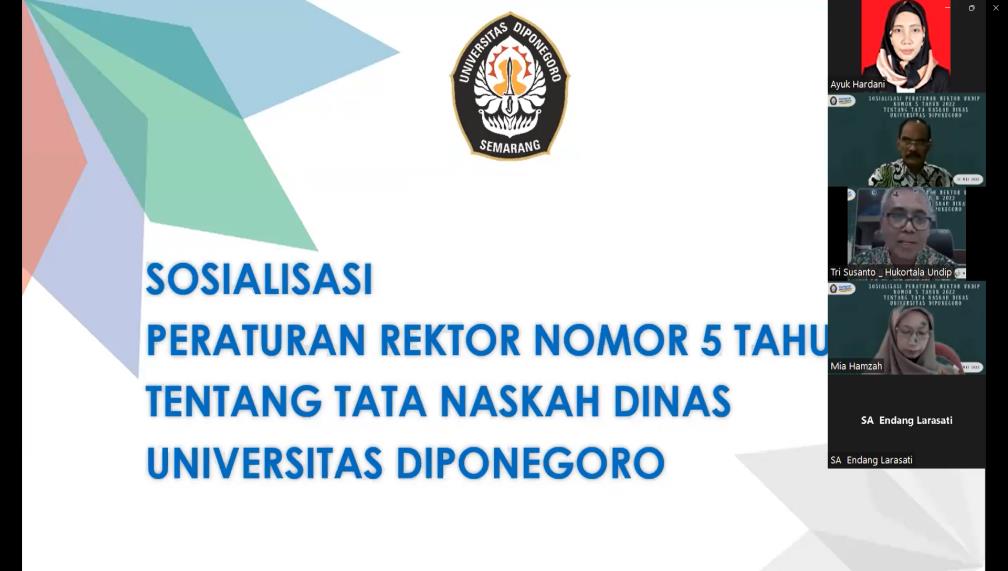 The Law, Organization, Protocols and Administration (Hukortala&TU) Office of Diponegoro University held an online socialization of Rector’s Regulation Number 5 of 2022 concerning Diponegoro University Office Manuscripts via Zoom meeting platform last week. The event was attended by the Undip Rector, the Chair of Board of Trustees, the Chair of Academic Senate, the Vice Rectors, the Deans of Faculties and Schools as well as the Heads of Units within the Undip environment and their staff.

In opening the event, the Rector of Diponegoro University, Prof. Dr. Yos Yohan Utama, S.H., M.Hum. explained that as a university that is on its way to becoming a university with modern management, like it or not, there must be regulations regarding the issue of the official script used. “Actually we have to understand the benefits of this script system. There are several segments that are not only related to the issue of legal certainty in this manuscript, but also related to the authority, who should publish it, as well as the aspects related to the target of benefits,”said Prof. Yos.

“Therefore, in the layout of this manuscript, we must study it properly, Insyaallah, with all the good things, good superstructure and infrastructure, Diponegoro University will become a modern university that is ready for all changes and the progress in the world,” he said

Tri Susanto, S.H. as a resource person as well as manager of the Law, Organization, Protocols and Administration Office, stated that the definition of official text refers to the Ministry of Education and Culture Regulation No. 3 of 2021, which is written information as an official communication tool made and/or issued by an authorized official at Diponegoro University. The official document is divided into 4 parts including the directive official script, the correspondence service script, the special service script and other official documents. Manuscripts of directives include regulatory service texts (there are 4 nomenclatures namely regulations, instructions, standard operating procedures and circulars); there are also the stipulation official document and the assignment official document. While the official correspondence manuscripts are divided into 3 nomenclature, namely official notes, official letters, and invitation letters. For special service texts, there are 9 nomenclatures including memorandum of understanding, domestic cooperation agreements, power of attorney, minutes, certificates, statements, letters of introduction, announcements and international agreements. Other official documents include notes, reports, staff reviews, certificates and charters. (Diah – Public Relations)