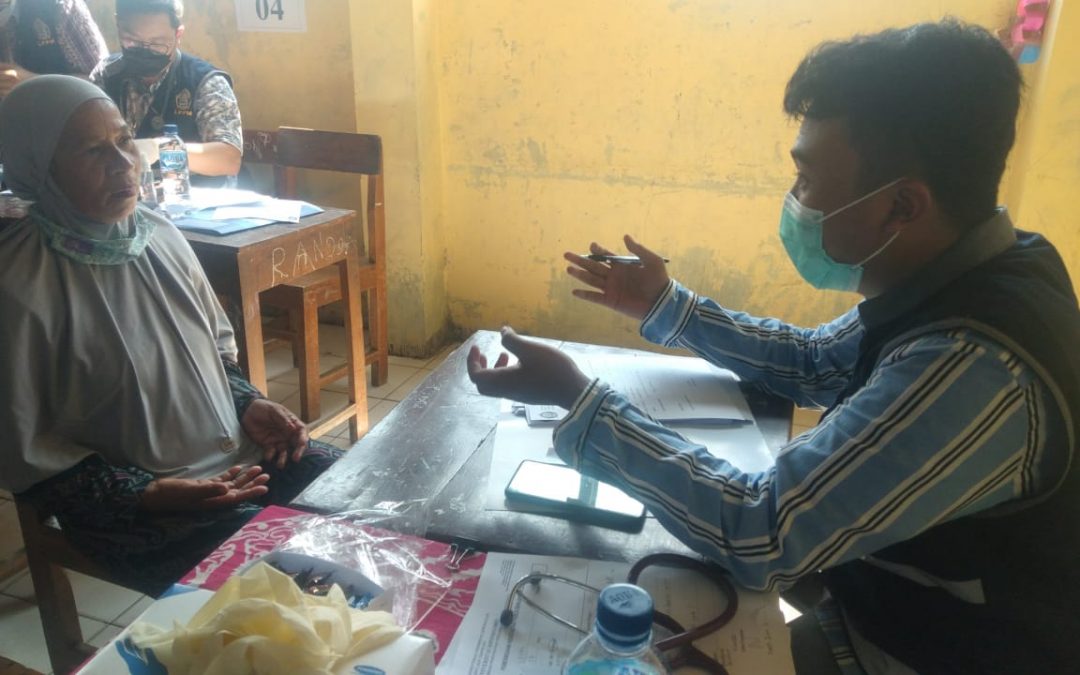 A total of 408 residents of Gojoyo village, Wedung District, Demak Regency, took part in Free Treatment and Circumcision Events organized by LPPM Diponegoro University, in Gojoyo sub-village, on Saturday (11/6). Since around 9 AM, the residents were enthusiastic about getting the first chance for free treatment held at SDN 3 Wedung, as well as 8 elementary school students who took part in the circumcision by the Undip team of doctors, coordinated by dr. Mughni and Dr. dr. Winarni.

Kaolan, 55 years old, a resident of RT 01 RW 10, came to get treatment because so far both of his eyes have often felt pain, so he tried to get checked and treated through this treatment.

Around 30 members of the team of doctors, nurses and pharmacists were at the treatment site from morning to evening.

“Residents here have difficulty in accessing treatment, so we are present in the midst of the residents. Moreover, some residents here last week were affected by the tidal wave, so that some of them also complained of being sick,” said dr. Mughni, after circumcising Umam, a student of Gojoyo Elementary School.

Dr. Adi Nugroho, M.Si., one of the members of this community service team said that the choice of the Gojoyo location was indeed considering the relatively limited access to transportation to the nearest health facility. All team members struggled a little to get to the location of this free treatment, by renting a local boat for about 20 minutes to the treatment location.

Dr. dr. Winarni said that the team was allocated to treat 400 residents and 8 students who were circumcised which took time until afternoon because there were many things to check.

Doctor Mughni added that this free medical activity for residents is mainly aimed at locations whose residents are relatively difficult to go to nearest health facilitation places, as well as residents affected by disasters such as tidal waves. Previously, the team of doctors he coordinated treated the residents of Lumajang, who at that time were affected by the Semeru eruption. At that time, his team treated about 110 residents of Candipuro sub-district, Lumajang Regency.

Residents of Gojoyo who seek treatment are very diverse, from walking to having to be escorted on a motorbike because of their health condition.

The obstacles that occur are more on the desire of residents who seek treatment to be examined first. However, the team of doctors is quite selective, by treating them according to their queue numbers and prioritizing patients with poor condition.

The activity of free medical treatment in Gojoyo was opened by the Head of Wedung Village, Jamaludin Malik. Supporting with Islamic prayers for this community service activities, local kyai, KH. Zaenudin, prayed for the residents to be healthier with the treatment given by the team of doctors from Diponegoro University, Semarang.

Residents are happy with the treatment from the Undip doctors because the team of doctors has many members and provides a wide variety of drug supplies in large quantities.

Indeed, about half a year ago there was an activity like this, but at that time the team consisted of only two doctors, so they could not reach the large number of residents.

This time, around 400 residents were treated and 8 students were circumcised. In addition to treatment, the Undip team also distributed souvenirs, sarongs and a number of other souvenirs for residents who came for this free treatment.