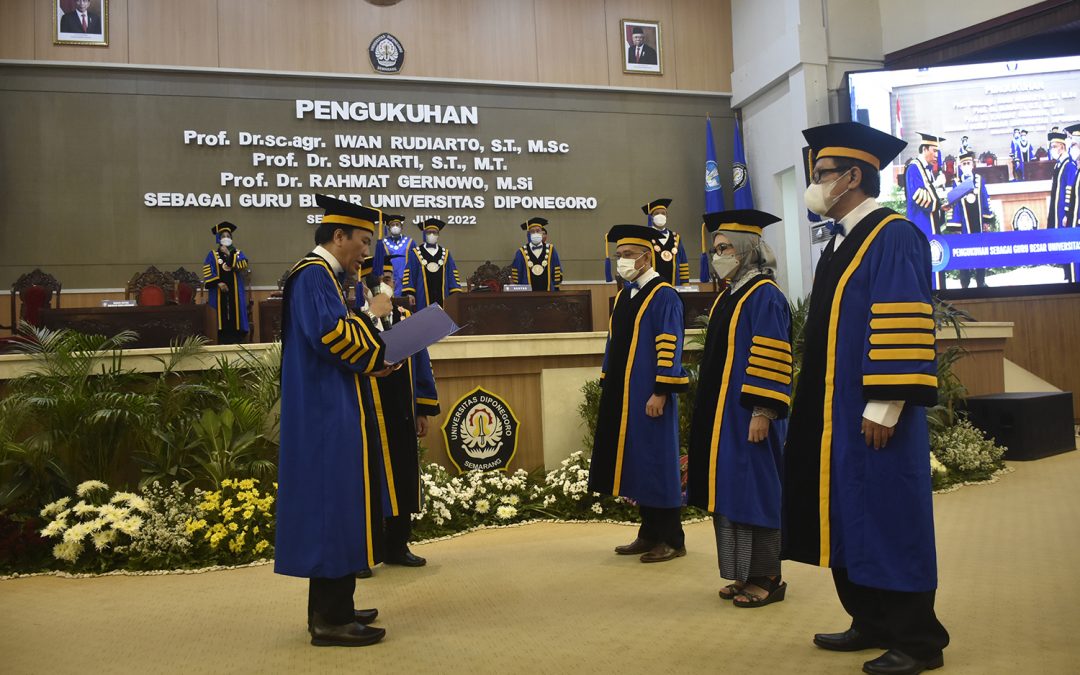 Undip Rector, Prof. Dr. Yos Johan Utama, S.H., M.Hum., in his speech congratulated the 8 Undip Professors who were inaugurated. “Representing the entire Undip academic community, I would like to extend my congratulations and highest appreciation to the newly inaugurated Professors and their families who have succeeded in achieving the highest academic positions of Professors in their respective fields of sciences,” he said.

This success was certainly not the result of one’s own efforts, but many parties involved and worked hand in hand to make it possible to achieve the new title.

“We are grateful for the role of the families and of course we cannot forget the role of Study Programs, Faculties, Academic Senate, Board of Professors, Credit Score Assessment Team, and supervisors who play great roles in achieving this professorship,” added Prof. Yos.

Prof. Yos also added that the true crown of a Professor is the ability to continue to create works for the benefit of mankind and the universe, moreover the field that he is involved in is certainly very related and beneficial to the society and environment.

“Being a professor is not only required to achieve scientific achievements, but it also includes mental maturity and integrity both as an educator and as a human being. With the highest academic degree, it is a duty to have a spirit of concern for mankind and the universe, as well as to build courage in upholding the truth based on honesty and integrity,” explained Prof. Yos.

Furthermore, Prof. Yos hoped that the professors who have been inaugurated will continue to create scientific works and be able to maintain integrity. “I hope that in the future professors will continue to produce quality scientific works that are renewable and able to maintain integrity both as human and as teachers,” he concluded.

The Undip Professor inauguration ceremony was officially opened by the Chair of the Undip Academic Senate, Prof. Ir. Edy Rianto, M.Sc., Ph.D., IPU. In his speech, he said that currently there are 161 active Professors at Undip. With more professors being inaugurated, it becomes one of the indicators of increasing the quality of the Tri Dharma of Higher Education at Undip.

“Several new professors have issued their decrees and are waiting to be confirmed and several lecturers are still in the process of being appointed as professors at the Directorate General of Higher Education. We all really hope that the number of professors at Undip will continually increase,” said Prof. Eddy.

Prof. Edy added that the appointment as a Professor is an acknowledgment of one’s ability in the field of science. However, the appointment of a person to become a Professor contains the duties and responsibilities to develop and disseminate the knowledge he controls for the benefit of society and the glory of the country.

“A Professor should be a protector and mentor for young lecturers and students in deepening and developing their knowledge and abilities. A great teacher must also be able to be a role model in everyday life,” concluded Prof. Edy.

He conveyed that this event was also attended by the Chair of the Board of Trustees, the Chair and Secretary of the Undip Board of Professors, the Vice Rectors, the Deans of Faculties and Schools, the Chair of the Dharma Wanita Persatuan Undip, and all leaders at Undip.