Physics Professor of FSM UNDIP, Rahmat Gernowo: Creating Mitigation of Hydrometeorological Natural Disasters Based on the Dynamics of the Extreme Tropical Atmosphere in Indonesia. 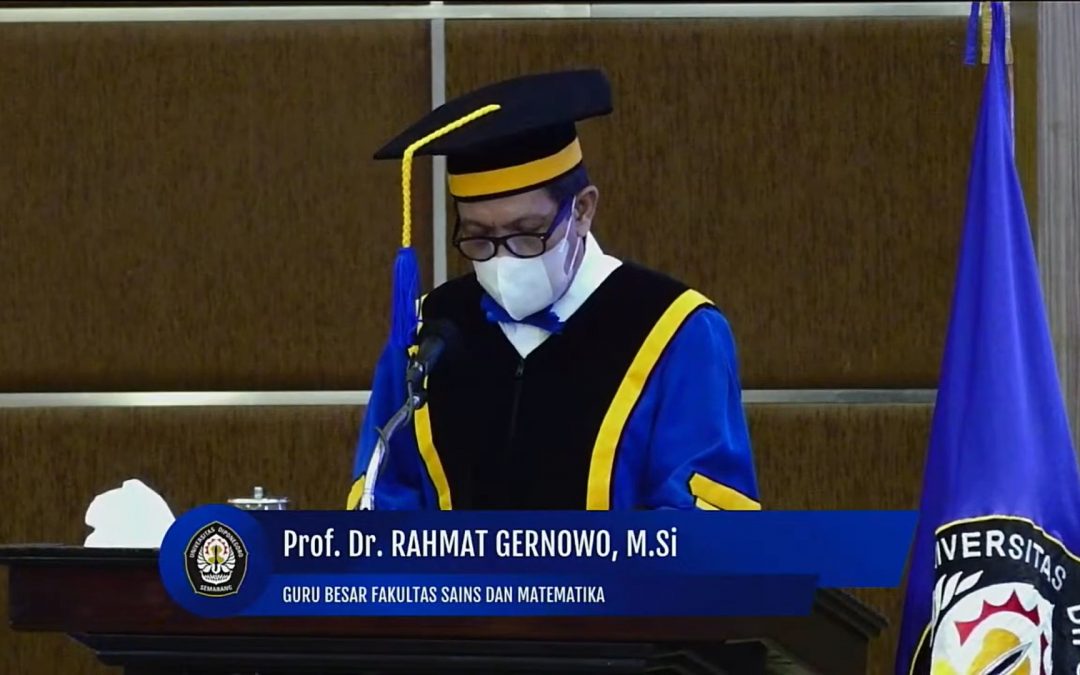 Professor of Physics, Faculty of Science and Mathematics (FSM), Diponegoro University (Undip) Prof. Dr. Rahmat Gernowo, M.Si., offered an effort to mitigate hydrometeorological disasters in Indonesia. He conveyed an idea of natural disaster mitigation by modeling and designing tools based on anomaly dynamics of the tropical atmosphere as an effort to be applied and used by community stakeholders. This was conveyed during his inauguration as a Professor at the Open Session of Undip Academic Senate which was held at the Prof. Soedarto SH Building, Undip Tembalang campus, on Tuesday (14/06).

Indonesia is a maritime country that is geographically located between two continents and two oceans and is traversed by the equator. This geographical position causes Indonesia to have a very complex and dynamic climate variability. The main characteristics of the Indonesian territory which consists of land and sea have caused Indonesia to be called as Indonesian Maritime Continent. The territory of Indonesia has very strong air convective activity because it receives stable solar radiation throughout the year.

In terms of geographical location, Indonesia is an equatorial region that receives a lot of solar heat radiation so that evaporation activity in this region is very high. Meteorologically, the weather in Indonesia is influenced by various kinds of circulation that occur in the atmosphere, both in zonal flow and meridional flow. “The dynamics of the equatorial atmosphere above the Indonesian Maritime Continent is strongly influenced by the zonal, meridional, and local circulation, as well as the availability of water vapor in the atmosphere.” said Prof. Rahmat when delivering his scientific speech entitled “Mitigation of Hydrometeorological Natural Disasters Based on the Dynamics of the Extreme Tropical Atmosphere in Indonesia”.

The zonal circulation is closely related to El Niño and Dipole Mode Positive events, while local circulation plays an important role in the uplift/convection process and functions in the mechanism of tropical rain formation. The meridional circulation is associated with the lateral monsoon, mainly the Asian – Australian monsoon, MJO (Madden-Julian Oscillation), monsoons and other local factors (regional morphology influences weather conditions) which interact with each other.

According to him, several of these factors affect the weather in Indonesia, and can interact with each other (strengthen or weaken each other) or independently, thereby creating a diversity of weather in Indonesia’s maritime areas. As a result, the variability of rainfall in Indonesia is closely related to the three circulations mentioned above.

The Head of the Information Systems Doctoral Study Program explained that the hydrometeorological disasters in Indonesia were mainly caused by the atmospheric anomaly phenomenon of heavy/extreme rainfall. The climate deviation referred to in this case is derived from non-seasonal climatic factors such as the ENSO (El Nino Southern Oscillation) phenomenon.

The analysis above is based on data on extreme rainfall events (CH) in Indonesia, and it was recorded that there were 5 extreme CH events from 2002 to 2020, the highest extreme CH events and triggering flooding in Jakarta, namely on January 26 – February 1, 2002, February  4 -14, 2007, January 15-24, 2013, and February 9-12, 2015, and December 31 – January 2, 2020. Several analyses show that the causes of flooding in Jakarta are mainly caused by extreme rainfall, land subsidence, and the contribution of sea level rise. From these analyses and events, it is important to discuss the hydrometeorological disaster based on the dynamics of the tropical atmosphere that causes extreme rainfall, as well as to prove that there are indications of the effects of climate change.

“One of the problems for Indonesia is the increasing trend of natural disasters, especially hydrometeorological disasters, some analyses conclude that this is due to indications of the impact of global climate change. In general, the factor that influences this phenomenon is the intensity of extreme rainfall in Indonesia. The intensity of the rainfall is easily affected by global climate variability.” said Prof. Rahmat.

Furthermore, Prof. Rahmat has analyzed the development of a forecasting model for convective cloud growth events to understand the symptoms of atmospheric anomalies from the events mentioned and would use the Weather Research and Forecasting (WRF) model.

The WRF model is an advanced generation of meso-scale assimilation system forecasting models to assist the understanding and prediction of rain and wind systems. The WRF model is the latest model starting from the MM5 model which is applied to the things mentioned above:

In addition, the field of air transportation has known the disaster of turbulence. Based on BNPB disaster data from 2000 to 2020, the second highest number of events is turbulence. Turbulence disasters include cyclones, tornadoes, and wind shears. To anticipate this, a modeling and design of an early warning system has been developed. The types of turbulence in air transportation are convective turbulence caused by convective clouds, these clouds are often known as cumulonimbus clouds in which large turbulence occurs, especially during rain and thunderstorms.

The Microburst is a wind shear that comes from the flow of cold air from the bottom of a storm cloud with a pattern like an inverted mushroom plant which is usually caused by a cumulonimbus (Cb) cloud. When a storm occurs in dark clouds (saturation conditions) then a microburst appears which is the main enemy of airplane pilots both during take off and landing.

There is turbulence that occurs in unpredictable weather conditions, in areas where there are no convective clouds called Clear Air Turbulence (CAT) or Sunny Weather Turbulence. CAT turbulence is an event that does not contain convective clouds, therefore this type of turbulence is difficult to detect both visually and using weather radar. CAT can occur with mild to moderate intensity, and can cause shaking in the aircraft, while strong intensity can make it difficult for the aircraft to maintain altitude.

Prof. Rahmat added that there are other causes of turbulence disasters other than Cb and CAT clouds, namely Low Level Wind Shear (LLWS), this case often occurs on the runway of the airport runway. The design of the LLWS monitoring system is the next analysis, as an effort to provide accurate information regarding air conditions over the airport. It is a system that can monitor low level wind shear conditions in real time and automatically inform the monitoring in the form of low level wind shear conditions or in the form of a safe or unsafe sign for taking off or landing aircraft. The accuracy of this information is very much needed as part of efforts to prevent accidents that occur.

The member of the Association of Indonesian Geophysicists explained that hydrometeorological disasters include natural disasters, atmospheric anomalies, extreme rainfall, and atmospheric turbulence phenomena. The dynamics of the tropical extreme atmosphere is the basis for triggering the occurrence of atmospheric anomalies. “There are two things that we have developed as a meteorological disaster mitigation effort, namely the development of a global model for prediction of convective indices and turbulence indexes based on anomalies of tropical atmospheric dynamics. Next, Design and Build an early detection tool for LLWS turbulence.” explained Prof. Rahmat.

The physical equation approach for forecasting models of convective cloud growth is very much needed to understand the symptoms of atmospheric anomalies, and the physical patterns that exist in the phenomenon of turbulent motion are the basis for developing the design of early detection tools. “We hope that all of our efforts and development of our thoughts will be useful for disaster science and society.” he concluded.

Prof. Dr. Rahmat Gernowo, M.Si., was inaugurated as the 17th Professor at the Faculty of Science and Mathematics Undip. The current number of active Undip Professors is 161 Professors.