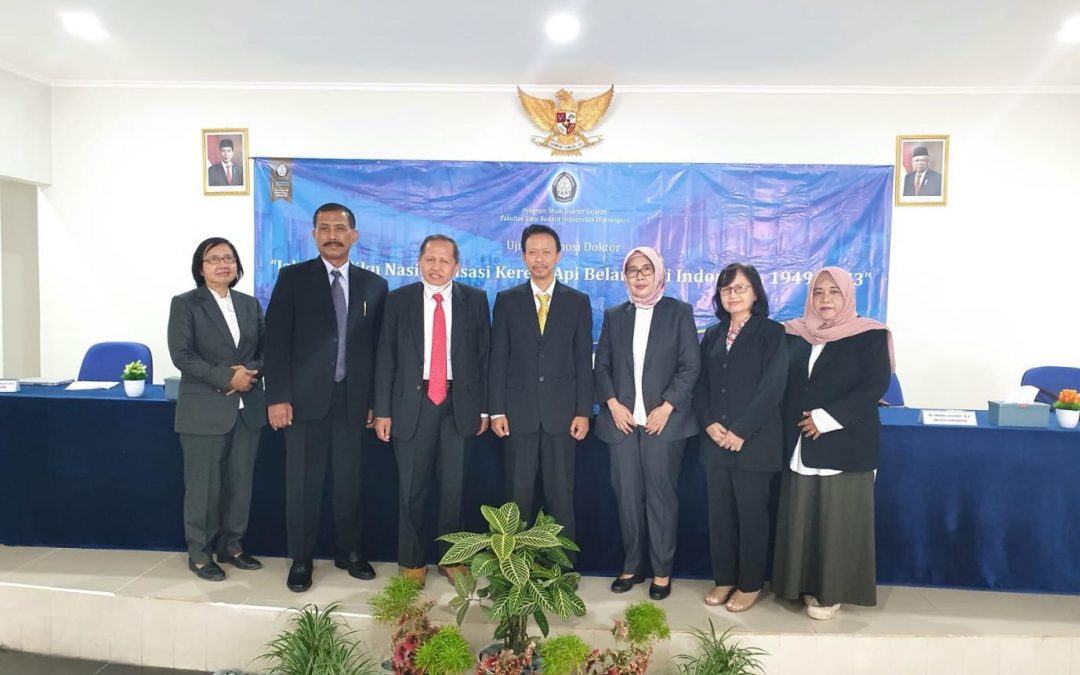 The exam, which was held solemnly in the Theater Hall of the Faculty of Humanities, was led by the Dean of the Faculty of Humanities, Diponegoro University, Dr. Nurhayati, M. Hum., she was also proud of the achievements made by the History Doctoral Study Program. “Alhamdulillah, thanks to a serious guidance process with the Promoter and co-Promoter, the two PhD candidates managed to complete their dissertation in no less than 5 years, which is 4 years and 6 months. Not only that, the two PhD candidates have also published articles in Reputable International Journals (Q2) indexed by Scopus and international proceedings indexed by Scopus.” said the Dean, who gave lectures at the Asia University of Taiwan several times.

The doctoral promotion session with PhD candidate Widi Wardojo started at 12.00 WIB. Widi Wardojo revealed that his dissertation analyzes the complexity of the nationalization process of various Dutch railway companies in Indonesia in the period 1949 to 1973. This research departs from a problem that has been assumed by many people that the process of nationalization of Dutch private railways after the war of independence took place very simple. However in reality, the nationalization had to go through a long and tiring diplomacy and required a large budget.

Prof. Dr. Agus Mulyana, M.Hum., revealed that although this nationalization has been realized, it does not provide financial benefits for the Government of the Republic of Indonesia. “It is like taking empty messages, as conveyed by the PhD candidate, because the capital required is very large to repair the slumping national railway industry. However, nationalization remains an option, especially because it is driven by political prestige.”

Co-promoter, Dr. Endang Susilowati, M.A said that this dissertation is rich in historical information, particularly related to the discourse on the takeover of Dutch assets after entering the 1950s. This discourse is closely related to efforts to pressure the Dutch to hand over West Irian to Indonesia immediately. “However, this forced expropriation of Dutch assets did not happen to the Dutch railway company. On the other hand, workers take part in the process of securing assets. The railroad workers are entities that have high political literacy. In addition, they also have a critical attitude towards company and government management policies that are not in favor of the interests of workers and the wider community.”

Co-promoter, Prof. Dr. Yety Rochwulaningsih, M. Si., saw that the Neo-Marxist approach applied in the dissertation is appropriate. “The very anti-colonial spirit of nationalism and anti-capitalist socialist ideology played a significant role in the process of nationalizing the Dutch railway companies. The phenomenon of xenophobia that grows in Indonesian society is also supported by the left-wing ideology that is widely embraced by railroad workers. This has also contributed to the spirit of nationalization of Dutch company assets.”

Promoter, Prof. Dr. Singgih Tri Sulistiyono, M. Hum. who currently serves as the Head of the History Doctoral Study Program said in the Promoter’s remarks, “This dissertation provides information that the nationalization of railways is still plagued with a number of problems, and there are even conflicts between national railway companies and the community that lead to asset ownership claims. “Just like a long train track, it turns out that the nationalization of trains still leaves a problem that is winding and has long tails.” continued Prof. Singgih, a professor who finished his doctorate at Leiden University in 2003.

Saparudin Barus revealed that the East Sumatra region became a very interesting locus to study because it was the most productive region as a producer of tropical plants in the Dutch East Indies since the early 19th century. In line with this natural potential, this region became a contestation ground for two colonial countries, namely the Netherlands and the British. Both of them are fighting for hegemony over the region which leads to political and economic dynamics. One of the novelties of this research is the fact that the area of East Sumatra remained an area that the British and Dutch continued to contest, even long after the London Treaty was signed on March 17, 1824.

External examiner, Dr. Phil. Ichwan Azhari, M. S. from Unimed said that this dissertation is very interesting when the portrait of the British and Dutch contestation is depicted through the use of currencies of British (Strait dollar) and Dutch (Gulden). At the beginning of the 19th century, British money was more widely used by the public, shops and outlets in East Sumatra, people there even preferred to transact with British money because it was more flexible and easily accepted by anyone. “In the end, the Dutch did not want to lose to British domination, so they imposed strict restrictions on the use of currencies other than Gulden through the implementation of the Octrooi right in 1887.” said the doctor, who is an alumnus from Germany and the founder of the Kotta Cinna Site Museum in Medan City.

Promoter, Prof. Dr. Singgih Tri Sulistiyono, M. Hum. Stated, “This dissertation provides a clear picture of how the power of colonialism and global capitalism with its various manifestations continues to this day. Those of course determine developments at the local level.”

Co-promoter, Prof. Dr. Yety Rochwulaningsih, M. Si. gave a positive impression on the results of this research. This dissertation has succeeded in presenting a fairly comprehensive picture of the complexity of relations between England and the Netherlands throughout the 19th century in East Sumatra. “It turns out that the rivalry between the two colonial entities cannot be separated from the historical facts of the political escalation that has developed in Europe since the early modern period. In the end, the nuances of rivalry colored the relationship between the two nations when they established economic dominance in the archipelago.” described the Professor who once served as the Head of the Doctoral of History Study Program for the 2016-2021 period. (Fanada/History)