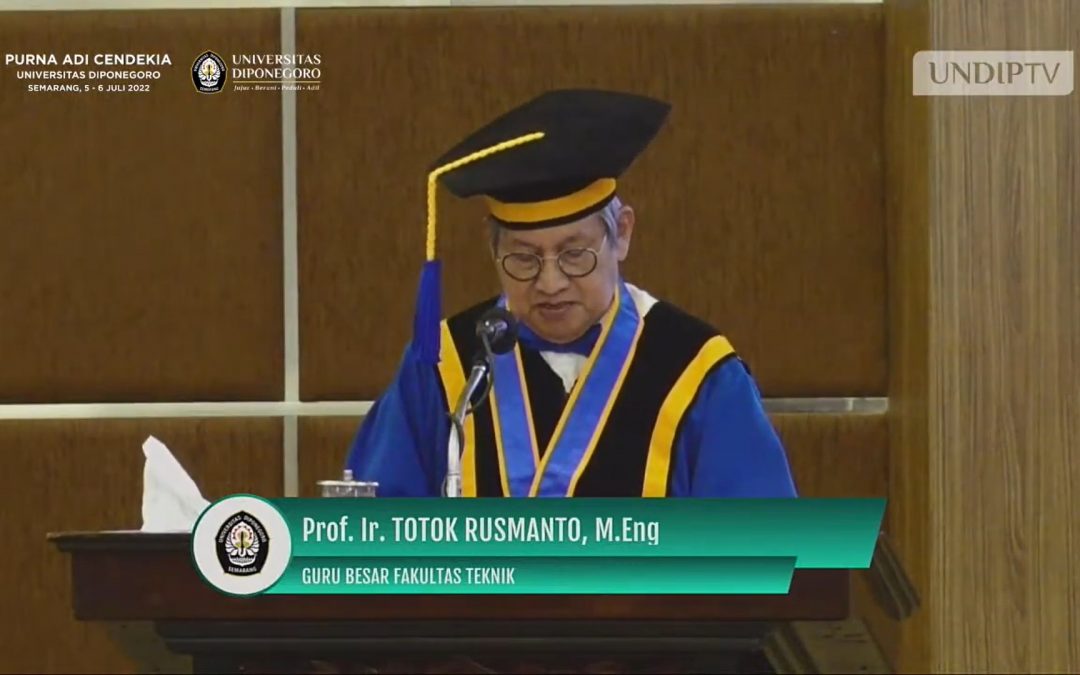 Prof. Ir. Totok Rusmanto, M.Eng. is already 70 years old by 2022. This is a sign that he has completed his term of service. This Professor of Theory & History of Architecture, Faculty of Engineering, Diponegoro University (FT Undip) has served and grew up at Undip for 42 years from 1980 to 2022.

As a form of appreciation for the dedication and services that have been given so far, Undip held an Open Session of Purna Adi Cendekia on Tuesday (05/07) at the Prof. Soedarto SH Building, Undip Tembalang Campus. Purna Adi Cendekia is a tradition carried out by Undip in the context of releasing professors who have officially entered their retirement period. In his speech, Prof. Totok delivered an oration entitled “From Documentation to Exploration, From Locality to Architectural Preservation”.

Prof. Totok explained that the architectural documentation activities began with the Final Project of the Bachelor of Architecture on the “Development of the Pejeng Traditional Village Center in Bali and the Planning of the Archaeological Museum”. From this activity, it was concluded that every architectural work always has its own uniqueness even though it is designed with traditional rules.

After serving as a lecturer and armed with this experience, starting in 1982 Prof. Totok held an Architectural Field Survey in the courses he taught. The students visit the coastal areas that still inherit traditional and vernacular houses. They take detailed measurements, and take pictures of buildings, as well as record details of construction and decoration.

With this documentation, architecture students get a real spatial experience in a vernacular house, know the exterior and interior, and understand the outer courtyard and the plants in the yard and its environment.

Thus it can be concluded that Architecture Undip has pioneered Survala activities in the development of architecture in Indonesia. 36 years later, Architecture UI held an activity similar to Survala in 2018 called Vernacular Architecture Documentation or Vernadoc to Muntok.

According to Prof. Totok, Survala can still be implemented, for example as part of the Summer Course that has been implemented at Architecture Undip. “Survala objects can be in the form of houses with local architecture that are still preserved in several tourist villages in Gunungpati, Semarang, or building facades in Kota Lama.” said the Professor of Theory & History of Architecture.

In addition, he explained that design exploration is needed to produce several design alternatives. Then the best design can be selected that is functional, constructive, aesthetically innovative and creative, and responsive to the humid tropical climate. The architectural developments that are currently taking place provide students with experience in creative detail.

“Long ago, Sunan Kalijaga had conducted explorations in the field of building structures when designing the Demak Mosque, which was much larger than Langgar Glagahwangi. Sunan Kalijaga dared to build Saka Tatal, the top of which was connected with pieces of teak which were strung together as high as 3 meters. Sunan Kalijaga has carried out the Construction Revolution by exploring architectural design.” he said.

Based on the development of local architecture, it will be able to create an architecture that is responsive to natural disasters, such as earthquakes and tidal waves. However, architectural research in coastal settlements is rarely carried out. “It is time for exploration in the field of building construction in coastal areas to anticipate the influence of high tides. It is necessary to educate homeowners about architecture that is responsive to natural changes. Cooperation is needed between the Departments of Architecture, Planology and Civil Engineering, History and Archeology, and the Indonesian Architects Association of Central Java.” explained Prof. Totok.

Furthermore, Prof. Totok hoped that architecture students will dare to defend their design ideas and must also be exploratory and dare to innovate. In addition, documentation and exploration also need to be carried out in education, research, and community service activities in the Department of Architecture, Faculty of Engineering, Undip. “Local potentials must be preserved and developed.” he concluded.