Entering the Retirement Period, FT UNDIP Professor Conveyed the Strategic Role of Chemical Engineering in the Era of the World Energy Crisis 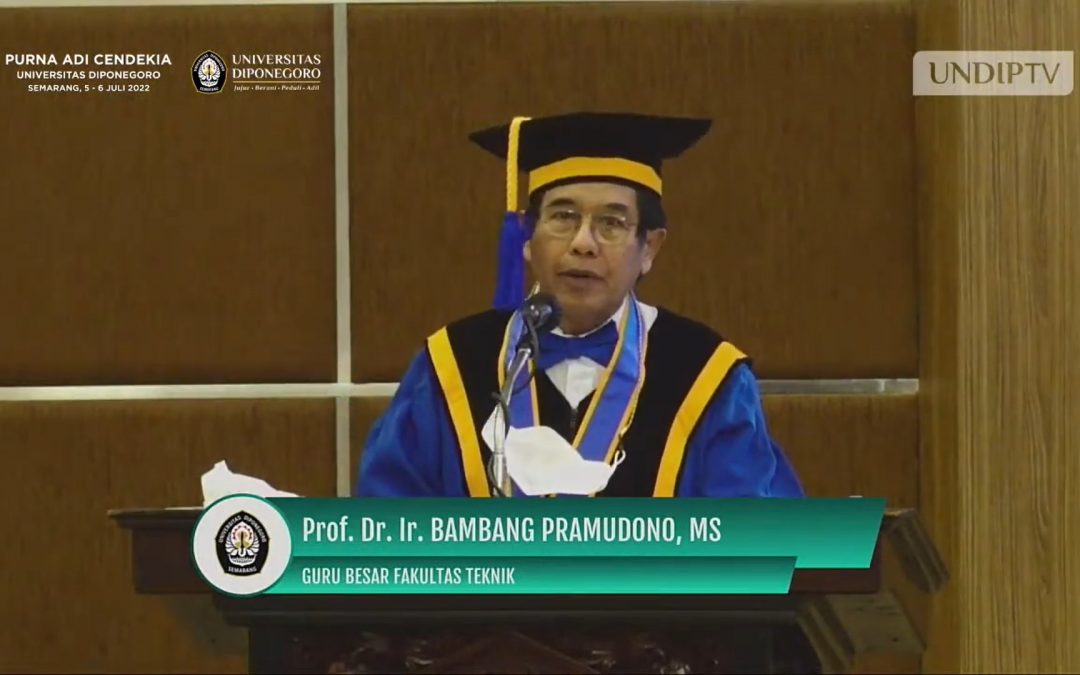 In order to give appreciation and respect for all the dedication and services that have been given so far, Diponegoro University held an Open Session of Purna Adi Cendekia on Tuesday (05/07) at the Prof. Soedarto SH Building, Undip Tembalang campus. Marking his retirement, Prof. Dr. Ir. Bambang Pramudono, M.S., delivered a speech entitled “The Strategic Role of Chemical Engineering in the Era of the World Energy Crisis”.

At the beginning of his speech, he said that experts had predicted that in the next era the world would experience a crisis that would later be related to human survival. According to him, there are 4 crises that will occur, including energy scarcity, food scarcity, clean water scarcity, and environmental damage.

The term crisis or scarcity in this context can be interpreted as an imbalance between the availability of energy, food, clean water and the amount needed. Based on observations and experience, crises can be classified into 2, namely temporary crises, usually marked by extraordinary increases in the prices of energy and food commodities. The causes of this crisis are natural disasters, wars, trade embargoes, epidemics, and others. Then the second is an absolute crisis, because conventional food and energy resources are running out, due to unplanned management.

Currently, energy needs are still dominated by fossil energy or conventional energy. In 2006, the use of fossil energy was still around 95% and the use of non-fossil energy was only less than 5%. The phenomenon of the use of energy sources from fossil energy which is still very high also occurs in almost all countries in the world. To overcome and anticipate the energy crisis that will occur, the programs that have been carried out so far are still relevant to be continued and even have to be improved or optimized, namely:

“Alternative energy has the meaning of replacing the main (dominant) energy used at a time (usually fossil/conventional energy) for conservation and diversification purposes. Empowerment of non-fossil energy resources, diversification of energy use, optimization or efficiency of fossil energy exploration can be carried out based on Chemical Engineering disciplines.” he explained.

He explained that in facing the upcoming energy crisis, efforts to diversify energy became very important and absolutely necessary. The role of Chemical Engineering in empowering alternative energy based on biomass is the right choice in the context of energy diversification. Biomass is organic materials derived from food and non-food plants, industrial waste from agricultural cultivation, plantations, forestry, animal husbandry, fisheries, industrial waste and municipal waste.

“With various biomass conversion technologies such as: briquetting, gasification, carbonization / pyrolysis, anaerobic digestion, liquefaction, according to the biomass waste used, various types of energy will be produced, such as biomass briquettes, synthesis gas (syn-gas), biofuel, charcoal , hydrogen, bio gas, bio-ethanol, biodiesel, and others, which can function as a substitute for fossil fuels.” said Prof. Bambang.

He added that hydrogen is a priority to be developed because it is ideal as energy in the future. Hydrogen has advantages compared to other types of energy, namely:

In addition to efforts to diversify the use of biomass-based energy and the development of fuel cell technology as a storage and producer of green energy, Chemical Engineering also plays a role in increasing the efficiency of crude oil exploration.

“From the description and analysis, it can be concluded that the discipline of Chemical Engineering is very relevant and has a major role in designing various alternative energy processes (or diversification) from various sources of renewable raw materials. Chemical Engineering can also play a role in increasing the efficiency of petroleum exploration through the enhanced oil recovery (EOR) process.” concluded Prof. Bambang.