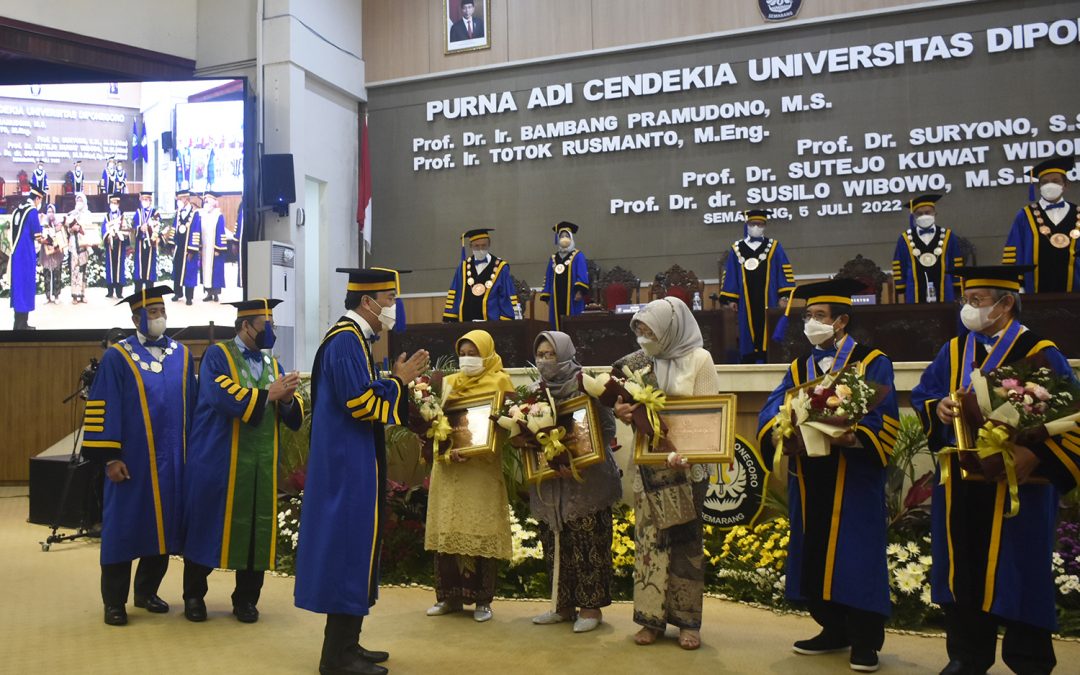 The Academic Senate of Diponegoro University (SA Undip) held an Open Session of Purna Adi Cendekia on Tuesday (05/07) and Wednesday (06/07) at the Prof. Soedarto S.H. Building, Undip Tembalang Campus. This event was held in order to give tributes to 7 Undip Professors who have officially entered their retirement period.

While giving a speech, Undip Rector, Prof. Dr. Yos Johan Utama, S.H., M. Hum. expressed his gratitude for the dedication of the seven Professors. “I personally and the Rector representing the management and the entire academic community of Diponegoro University express my incomparable gratitude for all the services and dedication of the Professors in helping to build and develop Undip so that it reaches a much better stage at this time.” said Prof. Yos.

Prof. Yos revealed that the Professors had taught a life science that became an example in an effort to maintain integrity as an educator and teacher, and taught an attitude of humbleness in everyday life so that they were far from being arrogant.

“All of us must be grateful because the Professors have exemplified the continuous and earnest efforts in developing scientific competencies that are beneficial to mankind, in the form of writing books, research, and international journals.” said Prof. Yos.

In addition, Prof. Yos said that maybe what the provision given by the state and Undip was still small and very less than what the professors had given to the nation and state, especially Undip. However, the Professors remained loyal in devoting themselves to Undip without prioritizing their own personal interests.

One of the Undip Professors who has retired from duty is the late Prof. Dr. dr. Susilo Wibowo, M.S.Med., Sp.And. who served as the Undip Rector for the 2006-2010 period. He passed away on May 27, 2022 due to illness. Prof. Yos revealed that the services of the late Prof. Susilo Wibowo in developing Undip institutions, especially in providing facilities and infrastructure through the Islamic Development Bank. “The various magnificent faculties buildings and the Diponegoro National Hospital (RSND) have become real witnesses of his work and services, as well as providing the main foundation for Undip in becoming World Class University (WCU) whose results are now visible.” explained Prof. Yos.

“Undip would also like to thank the families of the professors for helping to maintain the position of the Undip Professors so that they are always committed to good integrity. Undip truly believes that the family is the protection of good values which will be the main pillar of Undip’s success on the national and international levels.” concluded Prof. Yos.

The event was opened by the Chair of the Academic Senate, Prof. Ir. Edy Rianto, M.Sc., Ph.D., IPU. In his speech, Prof. Edy Rianto also expressed his gratitude for the dedication of the Professors in dedicating their knowledge at Undip.

“We as the Chair of the Academic Senate and on behalf of all members of the Academic Senate and the academic community of Diponegoro University, express our gratitude to the Professors who have made enormous contributions in the education process of the nation’s children, the development of science and technology, and community development. In Indonesia.” said Prof. Edy Rianto.

The Purna Adi Cendekia activity is an academic tradition given by Undip as the highest form of respect for Professors who have entered their retirement period as State Civil Apparatus. The tribute is given by Undip for all the services and dedication of the Professor while carrying out the duties of the Tri Dharma of Higher Education at Undip. In addition, this activity is also a manifestation of Undip’s respect by paying attention to a dedicated person who is older and has contributed a lot to the development of Undip.