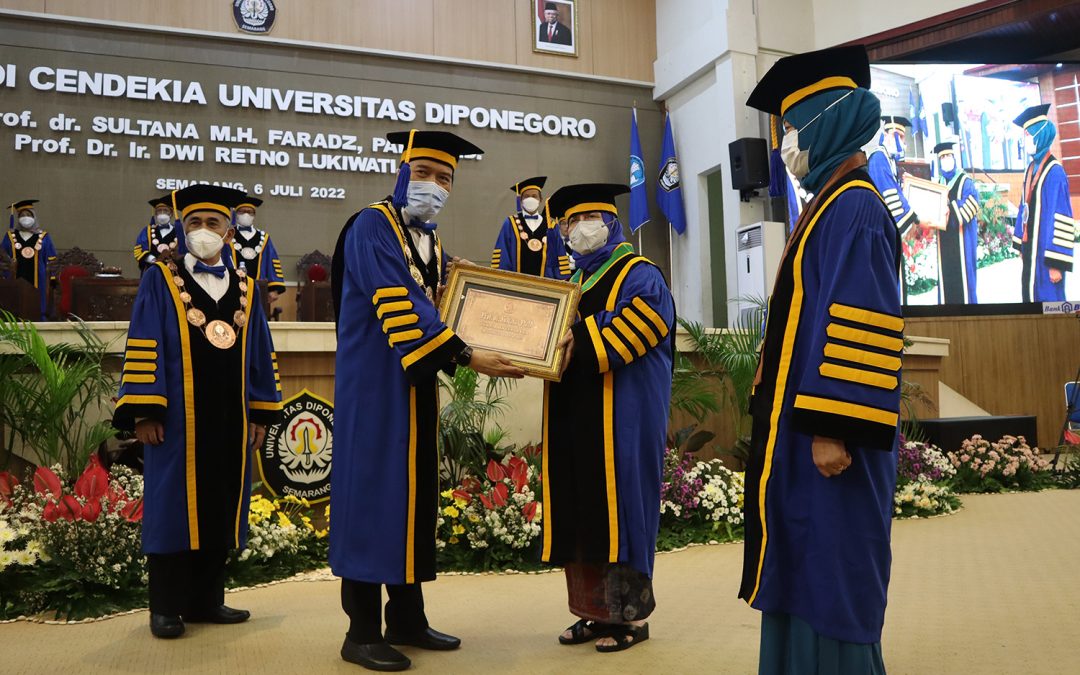 It has been more than 43 years for Prof. dr. Sultana M.H. Faradz, PAK., Ph.D., serving at Diponegoro University (Undip). The dedication she has given is countless. Year of 2022 marks the year in which Prof. Sultana entered her retirement period.

In order to give appreciation and respect for all the dedication and services by Prof. Sultana, Undip held an Open Session of Purna Adi Cendekia on Wednesday (06/07) at the Prof. Soedarto SH Building, Undip Tembalang Campus. This activity is an academic tradition given by Undip as the highest form of respect for Professors who have entered their retirement period as State Civil Apparatus.

Prof. Sultana is a professor of medical science for civil servants class IV E with a specialization in Medical Genetics, who was born in Purbalingga on February 2, 1952. She is married to Prof. Dr. M. Hussein Gasem, Ph.D., Sp.PD-KPTI and has 3 children.

Graduated as a doctor from the Faculty of Medicine, Diponegoro University (FK Undip) in 1978, she continued her studies in 1987 to get a Masters degree in Histology from Undip and a Ph.D. from the University of New South Wales, Sydney Australia in 1998. Furthermore, in 1979 she was appointed as a civil servant and became a Histology lecturer at Faculty of Medicine Undip.

In 1999, Prof. Sultana pioneered the establishment of the Molecular and Cytogenetics laboratory at the Faculty of Medicine and as a lecturer in medical genetics at Undip Postgraduate School. In 2003, she was inaugurated as a professor of medical sciences. Then in 2006, she initiated the establishment of a “joint program/degree” Master in Genetic Counseling program with several overseas universities which was the first program in an ASEAN country and she was chosen as the head of the program.

From 2007-2022, she was appointed as Director of the Center for Biomedical Research (Cebior) at the Faculty of Medicine, Diponegoro University. In 2009 she was assigned as Head of the Histology Department. Furthermore, in 2011-2015 she served as Undip Vice Rector for the field of development and cooperation.

During her doctoral education, she also participated in several activities, namely Clinical Genetics education at the Sydney Children Hospital (1994-1995); Clinical Epidemiology at the School of Community Medicine UNSW Sydney (1995) as a research fellow in the field of Molecular Genetics at the DNA Research Laboratory, Ongwanada Resource Centre, Queen’s University Kingston Canada (1996 and 1997). She participated as a post-doctoral research fellow at AMC Hospital, Amsterdam (2000), Department of Human Genetics, RUNMC Nijmegen (2000) and the MIND Institute at the University of California, Davis (2002).

In addition, in 2000 Prof. Sultana also received the Scientific Writing Program award from the Directorate of Higher Education, for Research on Molecular Screening of Fragile-X Syndrome in Children with Mental Retardation (Am J Med Genet. 1999). In 2005, she received an award as an outstanding lecturer at the Faculty of Medicine Undip.

In 2008 she was awarded as the best initiator scientist of a genetic laboratory in Central Java from the Mayor of Semarang Municipality and in 2009 she became an Australian Alumni Finalist in Research and Innovation from the Australian Embassy in Jakarta.

Prof. Sultana is noted for presenting and publishing her research results at conferences and more than 90 articles in international journals with an H-index 18. In addition, she carried out her research activities in the field of Medical Genetics, especially in research and treatment of children with intellectual disabilities, multiple congenital malformations and gender ambiguity.

She has successfully proposed to BPOM through a drug company for the manufacture of pure folic acid (vitamin B group) as the prevention of neural tube defects in babies in the womb. Thus since 2002 the use of folic acid in pregnant women has been socialized. The proposal for the provision of Hydrocortisone tablets for the treatment of genital ambiguity to the Ministry of Health and BPOM could be realized in 2014.

Research in areas with many people with intellectual disabilities proves that intellectual impairment has decreased and has appointed Cebior Undip as the center for research and diagnosis of the National Fragile X Mental Retardation syndrome. Research on sexual development disorders and the existence of the first multi-disciplinary team in Indonesia to solidly and voluntarily treat people with genital ambiguity has made Dr. Kariadi Hospital as a referral center for people with gender ambiguity. Prof Sultana was invited twice to the Kick Andy show on Metro TV.