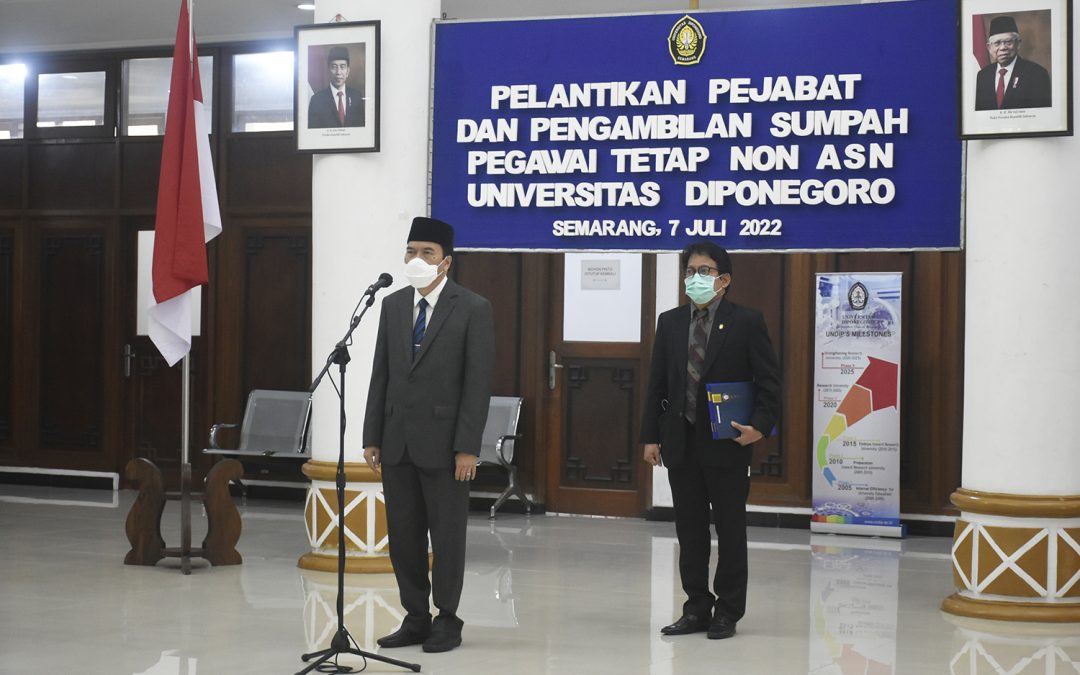 Rector of Diponegoro University (Undip), Prof. Dr. Yos Johan Utama, S.H., M.Hum., officially inaugurated officials and appointed employees at Diponegoro University on Thursday (07/07) at 13.00 WIB at the SA-MWA Building Hall, Undip Tembalang Campus. The inauguration ceremony was attended by the Undip Rector, the Chair of the Academic Senate, the Deputy Chairperson of the Board of Trustees, the Vice Rectors, the Deans of the Faculty/School, invited guests, as well as Undip officials and employees who will be inaugurated.

Furthermore, the oath-taking of Undip officials and employees was led by the Undip Rector accompanied by clergy in accordance with their respective beliefs. The signing of the Official Oath was done by the Undip Rector and Prof. Dr. rer. nat. Heru Susanto, S.T., M.M., M.T. and Drs. Mulyo Padmono as witnesses.

Starting his speech, Undip Rector, Prof. Dr. Yos Johan Utama, S.H., M. Hum. congratulating Undip officials and employees who have been sworn in and taken the oath. He revealed that the oath that has been taken is a responsibility, so that employees must carry out the duties and mandates that have been given as well as possible.

With the mandate that has been received, of course performance must continue to be improved. It takes hard work together to maintain and improve the quality of excellent service. “Every Undip employee must provide the best service. This is our shared responsibility,” said Prof. Yos.

Prof. Yos added that service improvements in all aspects will maintain Undip’s prestige. “In lectures, it needs to be maintained with accreditation. Thank God there are now many internationally accredited study programs. Services to students also need to be improved, it could be their prayers that saved Undip.” he added.

“We also need to protect the environment. In the UI GreenMetric 2021 World Ranking University, we are ranked 30th in the world and ranked 2nd in Indonesia. These all contribute to maintaining the quality of Undip’s services. Please keep the mindset that Undip’s progress depends on us.” continued Prof. Yos.

Furthermore, Prof. Yos advised officials and employees in Undip to be firm and brave in rejecting gratification and continue to improve their abilities and competencies. “Avoid gratification, there must be courage because what we are protecting is Undip’s dignity. Later there will be an evaluation, if the results of the evaluation are lacking, then you have to step back, give someone more skilled a chance. Hopefully it will be a motivation and enthusiasm, Insyaallah, it will be your charity of worship.” he concluded.