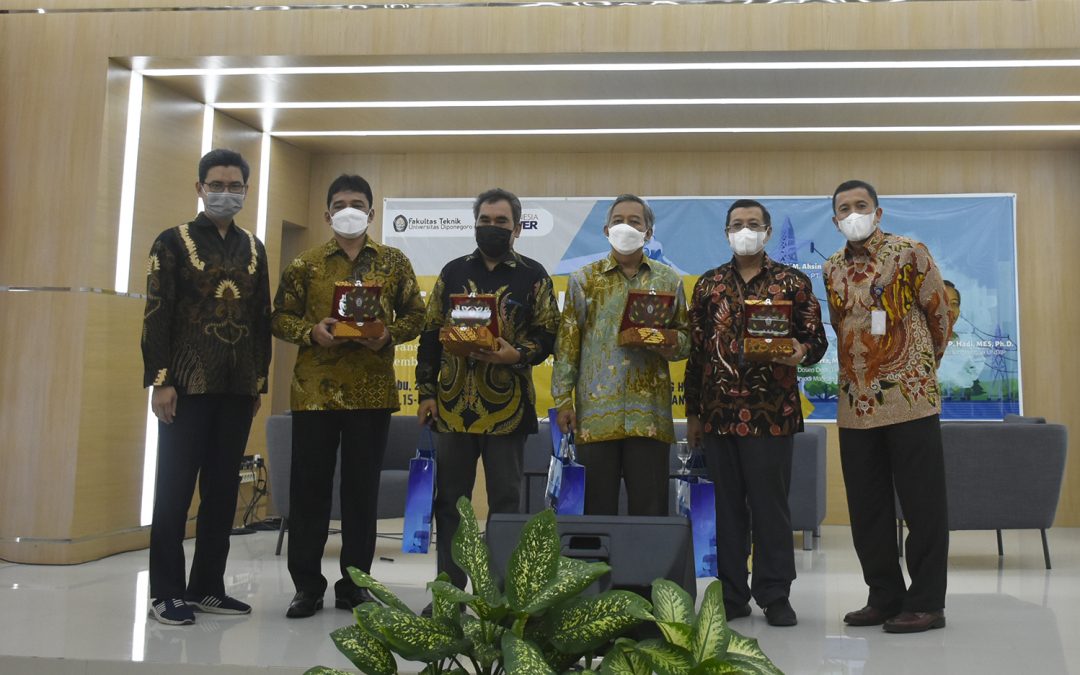 In order to develop New Renewable Energy (EBT), the Faculty of Engineering, Diponegoro University (FT Undip) in collaboration with PT. Indonesia Power has held a National Seminar with the theme “Development of New Renewable Energy as a Form of Energy Transition towards Net Zero Emission in Indonesia’s Future Development” on Wednesday, July 20, 2022 at 08.15 WIB at the Engineering Hall, 5th Floor of Dean Building FT Undip Tembalang.

This event was attended by the Dean of FT, Deputy Dean of FT, Heads of Departments and Heads of Study Programs within the FT Undip, President Director of PT. Indonesia Power and its staff, and students participating in national seminars.

The Dean of FT Undip Prof. Ir. Mochamad Agung Wibowo, M.M., M.Sc., Ph.D. when opening the event revealed that this national seminar is a form of collaboration and synergy between universities and industry, namely PT. Indonesia Power. “With the MBKM program, the Tri Dharma of Higher Education must be added to the presence of networking, collaboration, or synergy. This national seminar is a starting point for us to collaborate and synergize with each other.” said Prof. Great.

The latest Electricity Supply Business Plan (RUPTL) in 2021 is more dominant in EBT development up to 56%. PLN has conveyed that the carbon neutral (CZN) program for power plants by 2060 is no longer using fossil bases. PT. Indonesia Power as a subsidiary of PLN has made a program of energy transformation and transition through innovation and green booster with a dediselization program for all regions based on local energy, co-firing substitution of coal with biomass.

Universities and the academic community can observe and take a strategic role in world policies to reduce carbon emissions and the development of renewable energy. With the New Renewable Energy development process, Ahsin Sidqi invited Undip to actively participate in his research. “Later Undip’s researchers can work with us.I believe Undip is very ready.” he concluded.

Professor of Environmental Science Undip, Prof. Sudharto P. Hadi, MES, Ph.D., in his presentation of his material entitled “Developing Sustainable and Equitable Energy”, explained that the development of EBT will face a problem, one of them is from the economic side. It will be difficult to achieve because it is still relatively expensive. However if we continue to use fossil fuels, the social and environmental impacts will also be very expensive.

Prof. Sudharto added that there are two ways to deal with energy problems. “Facing the energy problem, there are two things that can be done, the first is developing New Renewable Energy, and the second is implementing energy efficiency.” he added. On this occasion, Prof. Sudharto also provided suggestions and input on the New Renewable Energy Bill that is being made by the Government.

In addition, the Lecturer of the Department of Electrical Engineering / Head of the Undip’s Master of Energy Study Program, Dr. Ir. Jaka Windarta, M.T., IPU, ASEAN Eng., in his presentation explained that the use of fossil energy which has been the world’s focus has been proven to contribute to accelerating the rate of global warming.

“A special report from the Intergovernmental Panel on Climate Change (IPCC) in 2018 even explicitly stated that it was necessary to carry out a rapid and large energy transformation to prevent an increase in the earth’s temperature at 1.5C. To limit this, it is necessary to reduce annual emissions. The energy sector has an important role in reducing these emissions.” explained Jaka Windarta.

In achieving the Net Zero Emission target, the Government is implementing five main principles, namely increasing the use of renewable energy, reducing fossil energy, using electric vehicles in the transportation sector, increasing the use of electricity in households and industries, and utilizing carbon capture and storage (CCS).

“In terms of energy, there are several policies that can be taken to support Net Zero Emission, namely reducing energy intensity (energy efficiency), New Renewable Energy, and transitioning to electric vehicles. Multi-stakeholder commitment and collaboration is needed to plan the development of Indonesia’s Net Zero Emission.” concluded Jaka Windarta.