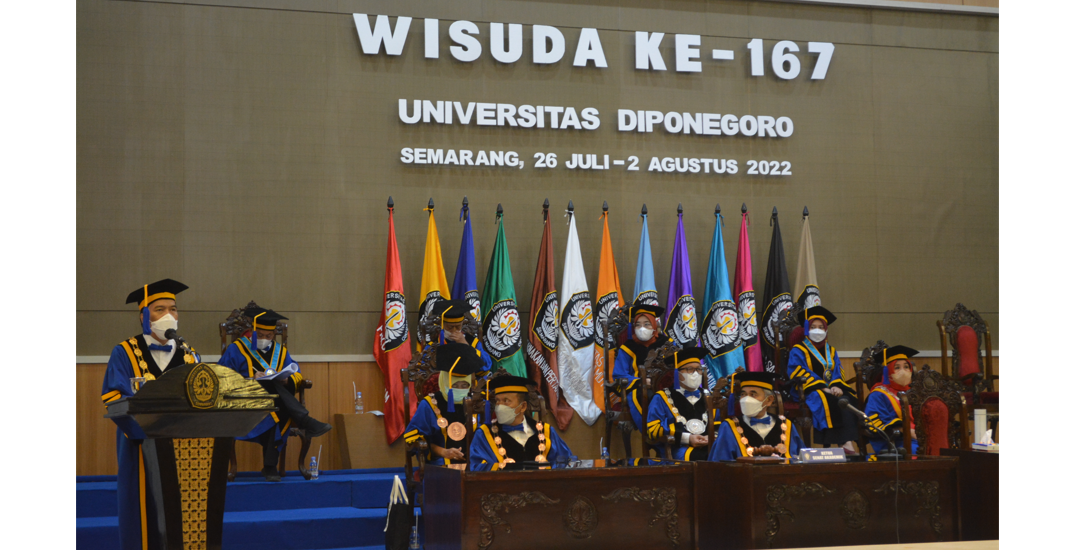 In his speech, Prof. Dr. Yos Johan Utama S.H., M. Hum. congratulated the graduates who have officially held diploma, bachelor, master, specialist, professional as well as doctoral degrees, and hoped for their success in finding jobs and careers.

Prof. Yos said that Undip was ranked 1st in the National Universities whose alumni were the quickest to get jobs based on the 2021-2022 QS Ranking for Employability; ranked 2nd nationally and ranked 30th internationally as Sustainable University based on UI Greenmetric in 2020, 2021, 2022; 2nd National Best PTNBH in 2021 and Top 5 Best PTNBH 2022; Top 8 National for World University Rank in 2023 QS WUR version; Top 5 favorite universities for 5 consecutive years; and having more than 20 internationally accredited study programs according to ABEST, FIBAA, ASIIN.

“The knowledge we have learned so far is actually a medium for our relationship with The Almighty, because knowledge is a means for worship in the form of charity, therefore it must be based on integrity, honesty, truth, and justice. Without integrity, science will only become a mere tool of power, and can even harm others, therefore, guard and uphold your integrity in carrying out scientific tasks,” he conveyed.

“We are grateful that we were born and raised in Indonesia, although there are still many shortcomings, but we must be grateful for what God has given us. The form of gratitude is in the form of obeying the sacred promise of the Indonesian nation, namely the ideology of Pancasila and the basic law of the Republic of Indonesia because we believe that the sacred agreement of the founding fathers will be able to bring us not only to the gates of independence but also the golden age of the rich Indonesian nation which is rich in culture with various ethnic groups, races and groups,” explained the Rector.

Furthermore, Prof. Yos said science becomes a blessing if it is practiced in goodness, we are obliged to practice the knowledge we have for the benefit of the nation in development, the welfare of the nation/state and mankind. Holding an academic degree has consequences for the holder to develop the knowledge to the highest degree and be able to practice it as well as possible. Today the most worrying problem is the problem of leaders’ integrity, various problems arise due to weak integrity such as corruption, manipulation, lies and legal engineering, policies that are not pro to the needs of the small community and more to the interests of the oligarchs, so if you want to be part of the ranks that solve problems in this country is to enter the realm of politics to improve it.

“Undip is a large university, with nearly a quarter of a million alumni, and has produced alumni who hold high positions in Indonesia. We as alumni have a duty to maintain the greatness of the alma mater, at least by not taking any disgraceful actions and always respecting our teachers both verbally and in behavior. Keep moving forward Undip alumni, never back down once and keep up the spirit. Ever Forward Never Retreat. May the glory and success will always be on our side.” (Lin – Public Relations)